As I've been saying for the past few days, the MA Health Connector should be closing in on the 100K QHP mark (and, by a nice coincidence, 200K Medicaid enrollees).

Today's update makes that even more clear: Another 2,976 QHP determinations likely means at least 1,300 more QHP selections, which should bring the total up to around 98,800 through last night. Another 1,200 today should put them over the top...and that's quite likely since the numbers should be ramping up further today (MA's February-start enrollment deadline is tomorrow).

For the record, this also means that Massachusetts has now officially enrolled 3x as many people in private policies as they did all of last year.

The Medicaid (MassHealth) side, meanwhile, isn't an estimate--those 195,549 people are enrolled immediately as I understand it. 4,500 more today and they've hit the 200K milestone. 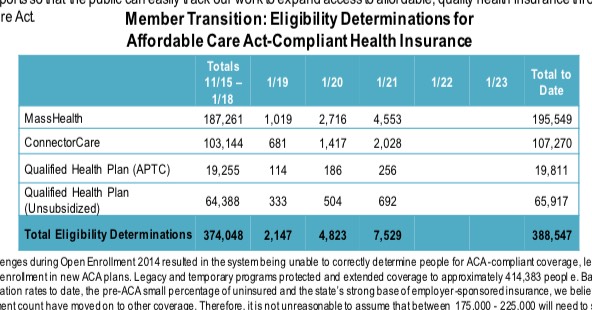