In my latest healthinsurance.org exclusive, I take a look at the off-exchange policy enrollment situation...and just like last year, I think a whole lot of people are going to be shocked when they realize just how many people are signing up for ACA-compliant Qualified Health Plans directly through their carrier.

In addition to this writeup, I'll be revisiting the off-exchange issue soon; I've already contacted 49 state insurance commissioner's offices (Vermont & DC don't have off-exchange enrollments anymore) to see how many are tracking those numbers on a more than annual basis.

Of course, this might have proven to be an exercise in futility. Aside from Oregon (and Washington State, though I have to confirm that for this year), the following should give you an idea of how tall an order this is:

UPDATE: Hallelujah! Washington State came through after all:

Per your request during our phone conversation yesterday, I have some enrollment numbers as of Nov. 30, 2014:

You are correct that the health plans approved for sale in Washington for 2015 comply with the ACA.

Now, it should be noted that the 159K off-exchange figure above is as of the end of November, not for 2015, just like the 136K exchange-based figure above it. That does not mean that 158,671 people have already enrolled in off-exchange QHPs for this year.

However, it does add strong further evidence to my post over at healthinsurance.org that the off-exchange numbers will likely be similar to--or even higher than--the exchange enrollments when the dust settles. 159K / 295K = about 54% of the total in Washington State's case, and will likely see a similar ratio this year, I would imagine.

UPDATE x2: Given the dearth of hard data, and given that no one is really paying any attention to the off-exchange QHPs anyway, I've decided to use estimates for this year based on the same ratios I have from last year in the spreadsheet, at least until I receive hard numbers for 2015. I'm distinguishing these estimates by italicizing the numbers.

In Florida, as of last June, the ratio was skewed the other way; here's the slide which is referred to in the Florida bullet point above. As you can see, the QHP ratio was 7.35 to 1 in favor of exchange-based policies...plus another 460K non-compliant policies which aren't relevant for my purposes. In this case, I'm using 13.6% of the exchange-based total for the off-exchange number (yes, I'm sure the ratio has shifted considerably for this year but it's all I have to go on for now). 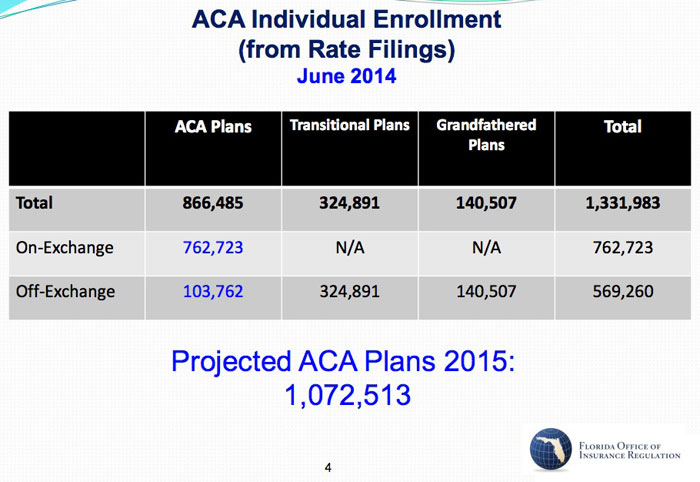 Using this admittedly questionable formula, I come up with around 360,000 "quasi-confirmed" off-exchange enrollments from those 3 states: 62,678 confirmed in Oregon, 172,855 in Florida and 124,202 in Washington State. I'm already probably way off base here with just the FL & WA numbers, so I'm not going to even try to get into states which haven't provided any off-exchange numbers, and I'm not including this on The Graph or anything, but at least it's a start...

UPDATE x3: OK, I've also confirmed as of May 1st, 2014, Nevada had 19,433 exchange-based QHP enrollees vs. a whopping 69,331 OFF-exchange QHP enrollees (not including grandfathered plans, and NV did not allow transitional/grandmothered policies).

So...that's like a 3.5:1 ratio of off-exchange to on-exchange QHPs, the highest I've seen so far.