After an extended break for the MLK Jr. Day weekend, the MA Health Connector's daily dashboards are back in business.

Friday's weekly report gave the latest hard QHP total: 93,262 through 1/14. Over the following 5 days, there were an additional 7,321 QHP determinations made. Using the 45% rule of thumb, that means Massachusett's QHP total should be up another 3,300 or so, for a total of 96.5K through last night.

There's one very odd thing here, though...what the heck happened on Sunday the 18th? Yes, enrollments are normally much lower on weekends, but only 657 total including Medicaid enrollments? I've seen that sort of drop on Thanksgiving, Christmas and New Year's, but this was just a Sunday (and MLK Day wasn't until a day later, where the numbers are a bit low but not by that much).

Anyway, given that MA's enrollment deadline for February coverage is coming up in 3 days, they should be able to break the 100K milestone easily in the next few days.

Meanwhile, their Medicaid (MassHealth) enrollment tally is up to 188K, and should similarly break the 200K mark within the next few days as well. 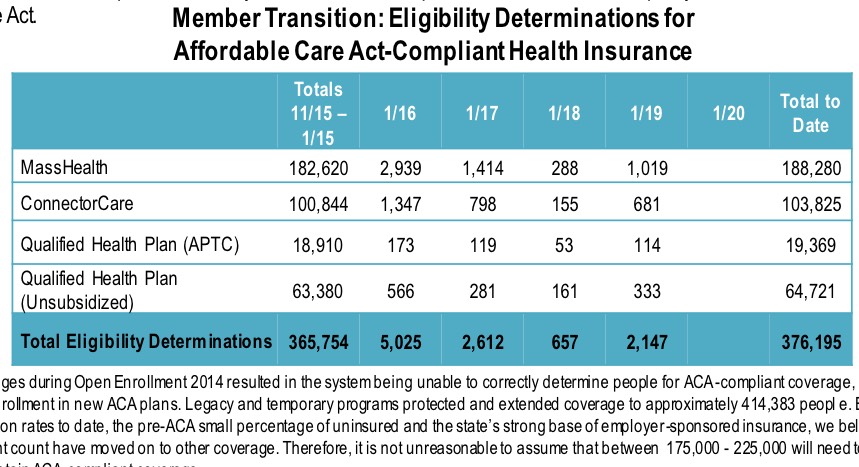