In the post-deadline, post-holiday period, Massachusetts seems to be settling into a pattern: Around 6,000 total eligibility determinations per day during the week, around 2,000/day on weekends. Of those, around 60% of them tend to be Medicaid enrollments, the other 40% for private policies (QHPs, which also include "ConnectorCare" in this case).

Yesterday there were another 6,508 added; 3,760 were immediately enrolled in MassHealth (Medicaid). The other 2,748 were for QHP applicants. As always, assuming at least 50% of those also selected a plan, that should tack another 1,400 to the total, bringing it to around 86,400 or so, while total Medicaid enrollments are now up to over 157K. 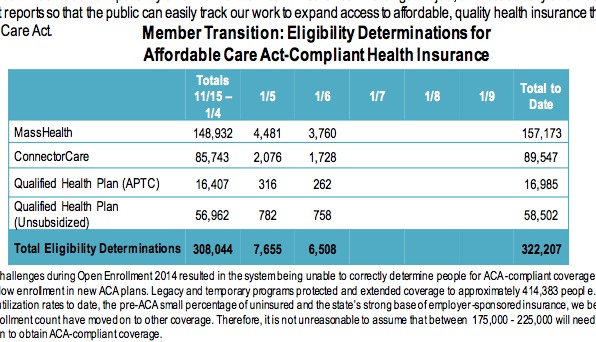