Back On Track: 6.593M QHPs via HC.gov through January 2nd

The past couple of weeks I was a bit off my game; I underestimated Healthcare.Gov QHP selections by 6% through 12/12, and then underestimated by 9% the following week. The report through the 26th was kind of a mess because a) I was out of town on a mini-vacation and b) it was completely overshadowed by the HHS Dept's first monthly report, which was itself also kind of a mess.

Today, however, I'm happy to say that my projection from last Friday was dead on target through January 2nd:

I think it's safe to assume that the current week (12/27 - 01/02) should follow a similar path, given New Year's Eve and Day being included, so I'll assume roughly 100K more being added this week, for a total of 6.59 million via HC.gov as of tonight.

Since Open Enrollment began on November 15, nearly 6.6 million consumers selected a plan or were automatically re-enrolled in the Federally Facilitated Marketplace (FFM). The Week 7 snapshot includes the New Year’s holiday; consumers continued to shop and select the plan that best meets their financial or health needs. 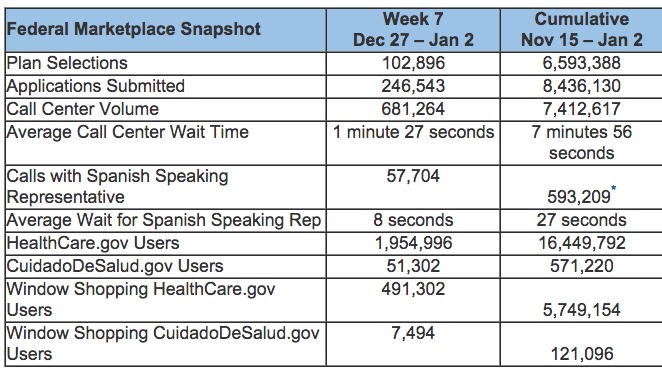 More interesting to me, as I noted on Friday, is the remaining number of applications submitted. Those are people who set up an account, filled in all of their information but who just haven't actually selected a plan yet. 8.43 million minus 6.59 million = over 1.8 million people who have yet to finish the process.