9 MILLION QHPS Estimated Nationally, and where things go from here.

As always, this is just an estimate; it could be slightly higher or lower. However, my best estimate is that 2015 private QHP selections via the various ACA exchanges (HC.gov plus the 14 state-based versions) will cross the 9 million milestone sometime today if it hasn't already done so.

In addition to the 6.59 million enrollees via the federal exchange which were just confirmed within the past hour or so, today has also seen updates from Minnesota, Kentucky and Massachusetts. Plug all of those into the Spreadsheet and the confirmed, official total has now reached 7.56 million nationally.

Tack on an estimated 960K renewals (active & automatic) from California, around 330K from New York, along with another 150K or so from the past week or two across various states (remember, some state exchanges such as Idaho haven't updated their numbers for as long as 24 days), and I'm quite confident that the 9 million mark has been reached. As always, see The Graph (also posted below) for a visual representation of where things stand and where they should be headed.

So, now what? Well, assuming that the numbers don't get purged substantially due to double-counted accounts, clerical errors, technical glitches and the like, I expect things to be fairly quiet for another week, reaching 9.1 million by around Jan. 11th before ramping up again for a "mini-surge" as Jan. 15th (the deadline in most states for February coverage) approaches.

That should bring the total to around 9.5 million in time for February coverage (payments pending, of course). After that it should be fairly quiet again for another 2-3 weeks: Around 10 million by the end of January and 10.5 million by around February 10th.

At that point things should get exciting again as the 2nd major surge shows up the 2nd week of February. I'm sure this will happen; the big question is whether it will resemble the January one (which would only bring the total to around 11 million) or be more like the mid-December surge (which I'm expecting, and which would be necessary to reach my projection of 12.5 million total by 2/15).

As always, it's important to remember that up to 12% of these QHP enrollees likely will not actually pay their first premium at all, although I suspect there will be a lower percentage of non-payments this year for a variety of reasons. If so, then the actual paying QHP enrollee number will be closer to 11 million.

That, in turn, may drop off a bit further by the end of the year (assuming a similar pattern to last year), ending with perhaps 10.5 million still enrolled/paying for their policies by the end of 2015. 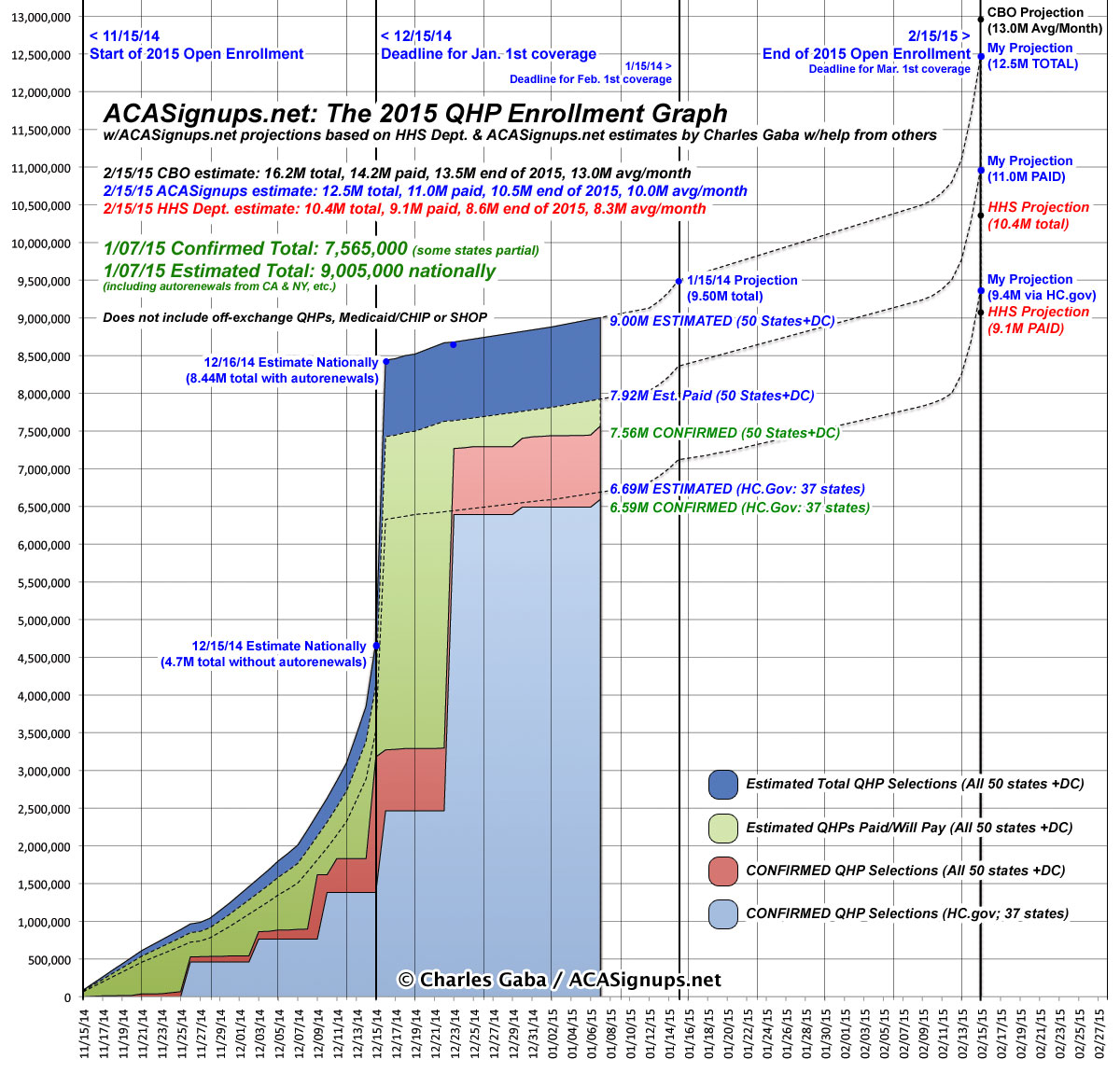