The Massachusetts exchange has released their weekly dashboard report, which includes actual QHP selections and payments, although that data only runs through 12/29.

Add them up and you get 79,842 total QHP selections, of which 55,260 have paid their first premium and are fully enrolled. This may sound like only a 69% payment rate, but remember that many of the remaining 24,582 aren't scheduled to have their current coverage dropped until the end of January and thus aren't even expecting their new policy to kick in until February 1st anyway. As always, the payments are a rolling average, and will ebb & flow until around mid-March (after which they should stabilize at around 88% at any given time).

For example, on Wednesday the 31st, the MA exchange issued a press release which stated that the total number who have paid in time for January 1st coverage is "over 50,000":

BOSTON – December 31, 2014 – More than 50,000 people will have new health insurance coverage starting Jan. 1 through the Massachusetts Health Connector, and the Commonwealth is prepared to ensure the transition goes as smoothly as possible for consumers obtaining their new coverage. Additionally, nearly 140,000 people have been enrolled in MassHealth since Nov. 15, 2014.

Finally, there were an additional 3,311 QHP determinations on the 30th; assuming at least half of them have also selected a plan (pretty standard for MA this year), that should mean at least another 1,600, or over 81.4K total. Presumably activity dropped off substantially on New Year's Eve and Day, but I'm pretty sure the total as of this writing is up to 82K or so. I'll stick with the 81.4K figure for the moment, however. 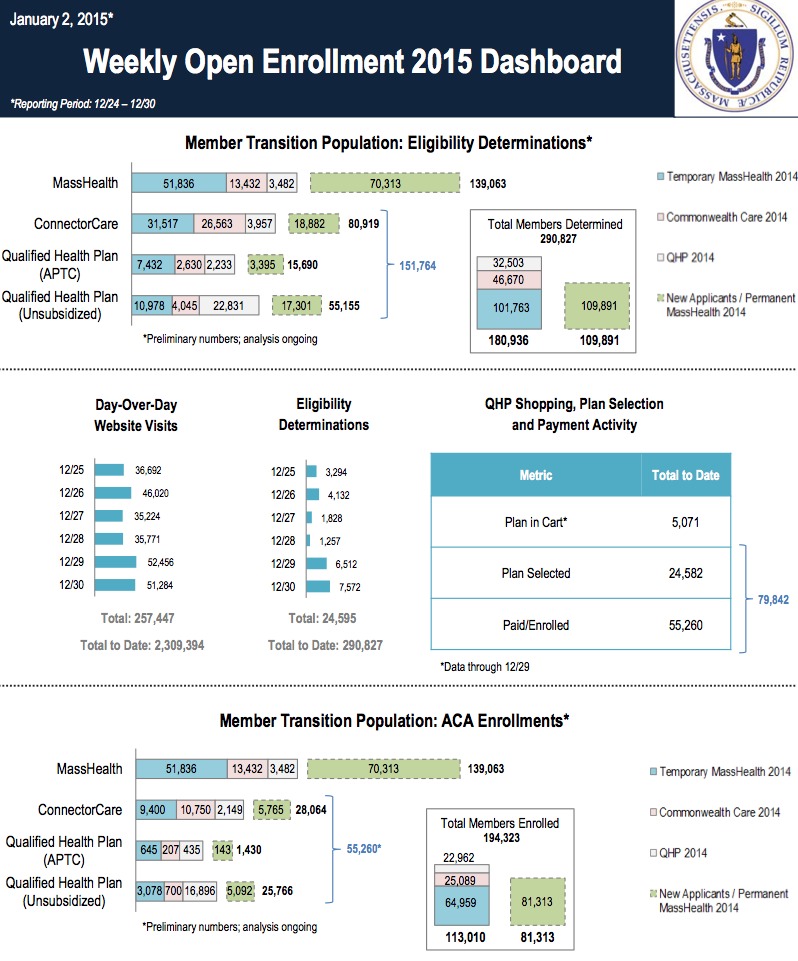