Worth Noting: There's at least 1.7 million QHP applications still out there.

In all the fuss and bother over yesterday's monthly HHS report (which only ran through the 15th), I almost forgot about the HC.gov-only  "weekly snapshot" which was also released at the same time. This report only covers the 37 states run via the federal exchange, but is more recent; it goes all the way up through December 26th, just 5 days ago.

I did acknowledge the 96,446 additional QHP selections since the previous week at the very end of my analysis of the monthly report, but didn't look at the rest of the weekly report at the time. There's not a whole lot of new data here, but there are a couple of noteworthy tidbits:

Last week, HHS Sec. Burwell gave a vague "high 30's" when asked what percentage of the renewals as of the 4.48 million HC.gov renewals were actively renewed/re-enrolled versus the number who were automatically renewed in their existing account. The actual breakdown appears to be:

Of course, over the following week, another 96,446 new enrollees were added for the current total of 6.49 million.

The other noteworthy news here: The total number of applications submitted is now up to 8.19 million people.

I don't know whether that total includes those 2.69M autorenewals or not. Logic suggests that it shouldn't, since "applications" implies someone actually creating an account and filling out new info, which was not the case for autorenewed enrollees. However, if they aren't included, the implications are rather amazing.

8.19 million applications total minus 6.49 million plan selections = 1.7 million potential QHP enrollees who still haven't selected a plan yet...but the vast majority of them presumably will do so soon. If 90% of them do so, that's at least another 1.5 million who will be added to HC.gov, which is very good considering we're only halfway through the enrollment period. This is the most likely scenario.

However, if it's actually 8.19 million applications total minus 3.7 million plan selections (that is, if the application number does not include autorenewals), that means a whopping 4.49 million additional potential enrollees who've submitted their info but not selected a plan yet.

If that's the case and 90% of them eventually enroll, that's another 4 million via HC.gov alone, which would bring the HC.gov total to 10.5 million...and wouldn't even include any state exchange enrollees. Add them in and you'd be talking about upwards of 14 million people...and that's not including enrollees from future applications. 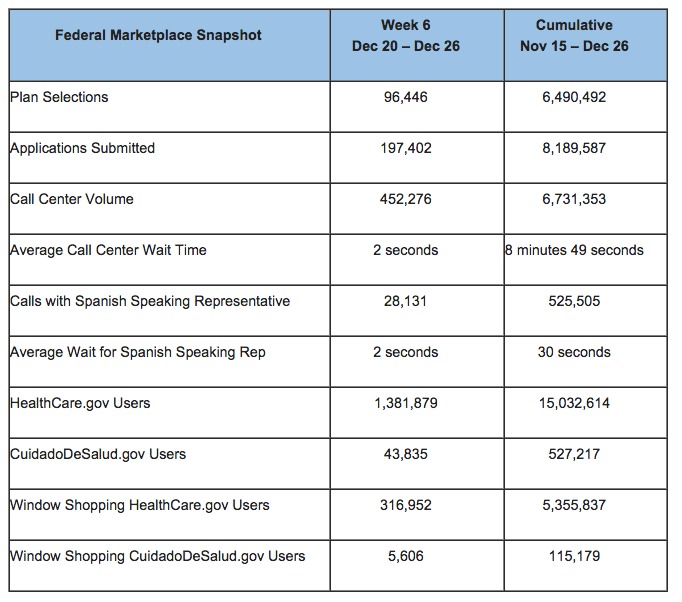 And remember, this is just for the federal exchange. I don't have a ton of data for the state exchanges when it comes to "applications" or "elegibility determinations", but just to give a taste, check out Massachusetts:

Other states presumably also have tens of thousands of "application submitted but no plan selected yet" accounts out there as well.

Again, not all of these applications will be converted into actual enrollments. Some may be multiple accounts under the same household; some may have been created accidentally; some will change their mind and not bother finishing the process. Even so, that's still a whole lot of people who went through the trouble of taking it this far; I presume the vast majority will go the rest of the way and actually select a plan soon.

UPDATE: In a Twitter discussion with Dan Diamond, Alex Wayne, Andrew Sprung and Pradheep Shanker, some other points were raised:

In other words, the "unselected application" number is worth keeping an eye on, and will probably have a higher batting average than last year (in fact, it's already close to 80%), but it's not necessarily indicitative of anything.