Yesterday I officially confirmed 77,548 QHP selections via the MA Health Connector as of midnight Sunday the 28th.

They just released today's daily dashboard report, and the QHP eligibility determinations have gone up by another 6,263 people. Every day since Nov. 15th, roughly 50% of the QHP determinations have gone on to actually select a plan that very same day; the rate has ranged from 45% - 55% but always hovers near the 50% mark. Assuming this is still the case, that should mean at least 3,100 more QHP selections as of last night, for a total of around 80,600 to date.

In addition, MA has confirmed 139,063 new Medicaid/MassHealth enrollees, which have immediate effect. 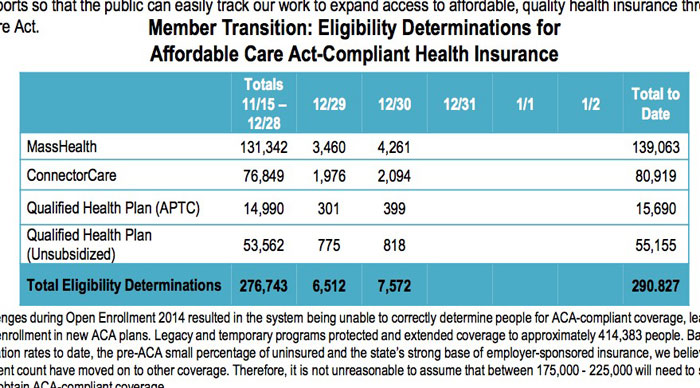 As a side note, this means that MA has now enrolled more than 2.5x as many people in private plans for 2015 as they did all of last year.