In all the hullabaloo over the monthly HHS report yesterday, not a whole lot has been said about the Medicaid/CHIP side of things. Medicaid/CHIP enrollment has always been much trickier to pin down than private QHPs, partly due to the high "churn" rate of people moving onto & off of it, partly due to about 40% of the states not having implemented any version of ACA Medicaid expansion anyway, partly due to the headache-inducing rules for eligibility and nightmarish paperwork hoops people have to jump through to enroll in some states.

The other reason for confusion is that the HHS reports only state how many people were determined eligible for Medicaid/CHIP in each state. It doesn't necessarily follow that 100% of those folks actually end up being enrolled. This footnote from page 21 should give you an idea of how much of a pain in the ass this is to figure out:

In addition, the HHS Dept. has made an interesting change this year--last year, the monthly reports included Medicaid/CHIP eligibility determinations for all 50 states (+DC). This year, they appear to have decided to abandon including the state-based exchanges when it comes to Medicaid/CHIP data and are only reporting determinations for the 37 states operating off of HC.gov.

This doesn't mean that there's no data for the state exchanges, it just means that their data will be reported directly by the exchanges themselves (or in some cases, will have to wait until the next monthly CMS report which sort of lumps in ACA exchange data with off-exchange Medicaid/CHIP).

So, how to handle this for my own purposes (ie, the Medicaid Spreadsheet)? Well, 11 of the state exchanges have been reporting Medicaid enrollments via the exchanges directly. In addition, Michigan, Pennsylvania and New Hampshire (all of which started their version of Medicaid expansion after 1/1/13) have reported their expansion-specific data recently.

Another complication: Some of these folks may fall into the "woodworker" category, while others may be part of the "standard churn" (ie, moving onto/off of Medicaid every few months). I'd imagine this second category is likely to be pretty small, though; presumably those who are already "in the system" for Medicaid already have case files/etc on record with their state Medicaid office anyway and don't need to run through the ACA website.

So, here's what I'm going to do for now:

I'm going to assume that 90% of those "determined eligible" in each of the 37 states in the HHS report actually make it through to final approval and enrollment in the program. I'll modify/correct this next month if & when the CMS report (or a future HHS report) provides better data. Then:

In other words, let's say a given state lists 10,000 "determined eligible" for Medicaid/CHIP. I'll assume around 9,000 actually complete the process and enroll:

Yes, this is an absurd way to do it, but I've been proven pretty accurate using this sort of methodology in the past, and frankly I don't have anything better to use for the moment. 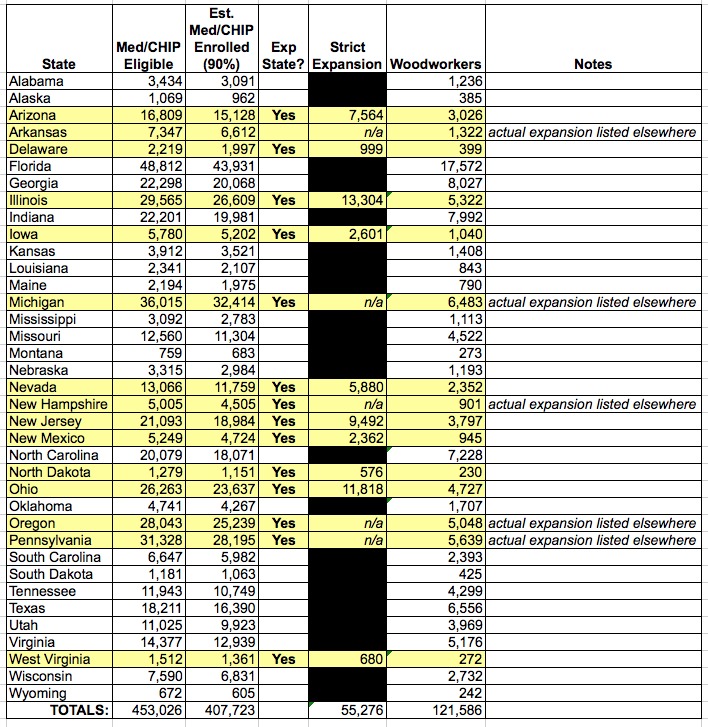 When I plug all of these into the Medicaid Spreadsheet, in addition to the existing Medicaid/CHIP expansion/woodworker data which I have confirmed via more accurate sources for other states, it comes to a total of 1,116,444 since November 15th.

How accurate is this? Well, I have no way of knowing yet, but Medicaid/CHIP enrollment has been going up between 400K - 700K/month for most of the summer/fall. 1.1 million in a single month (more like 5 weeks, really, since some of the state data is more recent than 12/15) may sound pretty high, but it sounds reasonable to me given that it took place during the official Open Enrollment period. There's no deadline for Medicaid/CHIP enrollment, but there's been a massive education/visibility campaign since the beginning of November which swept up a lot of the Medicaid demographic as well...plus, 118,000 of this total is from Pennsylvania's expansion program alone, which didn't even start accepting applications until early November.

Anyway, this works for now. Hopefully more accurate/specific data will be forthcoming at some point...