OK, I actually have 3 different sources for these Massachusetts numbers, and the dates and classifications overlap a bit so bear with me.

First, we have today's daily MA Health Connector Dashboard report, which states that there have been 148,453 QHP determinations thorugh yesterday (12/29). Assuming 50% of these have selected plans, that's around 74,200 QHP selections to date. In addition, the 134,803 Medicaid (MassHealth) enrollments are already locked in. 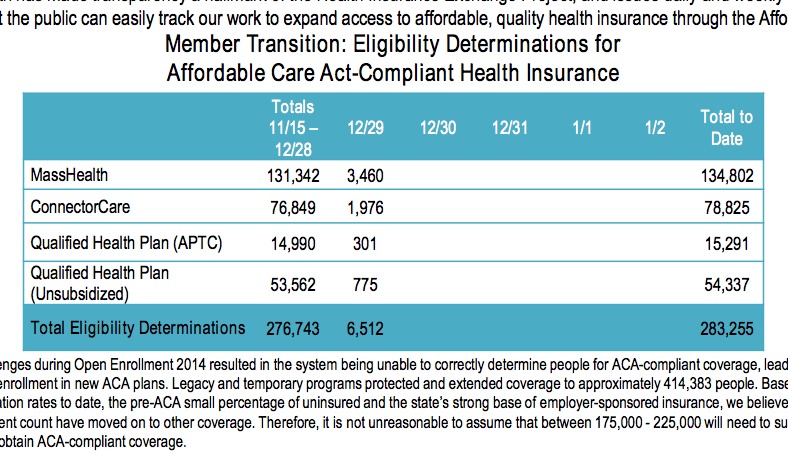 However, there's also this story from Felice J. Freyer of the Boston Globe from 12/28 (about a jaw-droppingly poor bit of timing by private, for-profit corporation Dell to install some sort of major software update which caused the payment system to be unavailable for 12 hours on the payment deadline), which pins down the numbers a bit further:

But it appears the outage did not have a big effect on enrollments, he said. About 780 people paid Saturday, and by Sunday evening, 720 more had done so, Lefferts said.

Last Tuesday was the deadline to select a plan through the Connector, established to serve people who do not get health insurance through an employer. But the Connector extended the first deadline for paying the first month’s premium until midnight Sunday. Payments can be made online or through the mail. Consumers who miss the deadline will not be able to get coverage until Feb. 1.

Of the 74,203 people who selected plans by the Tuesday deadline, 51,888 paid their first month’s premium by Friday.

Well, obviously the "plan selected" number is considerably higher than 74,200 now if it was already above that 6 days earlier. Hard to know how many more, but I'll use 74,203 as my baseline for the moment.

But just because someone selected a plan, it does not mean that the consumer necessarily was facing a deadline for getting insurance. Some people’s plans don’t expire until the end of January and, thus, officials said they were not expecting all 74,203 to pay premiums by Sunday.

So, let's zoom in on the "paid for January coverage" rate in a 2nd article, also by Ms. Freyer for the Globe:

Nearly 50,000 people have purchased 2015 health insurance through the Massachusetts Health Connector, a number that exceeds state officials’ expectations even amid lengthy call center waits and a sometimes frustrating payment system.

Although enrollments continue for six more weeks, the Connector passed a major milestone Sunday, the deadline for coverage effective Jan. 1.

The 49,901 consumers who paid by midnight Sunday surpass original state projections that 30,000 to 35,000 would enroll by that first deadline, said Maydad Cohen, the top official overseeing the Connector website’s reconstruction.

Huh. OK, that's about 3,500 fewer than the prior article. This is explained a bit later:

The 50,000 people who enrolled by Sunday amount to two-thirds of those who selected health plans. It is not known how many of the remaining can wait until Feb. 1 for their coverage to renew, how many neglected to pay in time, and how many tried to pay but snagged in the payment system.

(Because of incorrect information provided by the Connector, a story in Monday’s Globe said the enrollment by Sunday’s deadline was greater than 50,000.)

Payment checks, along with some 1,500 electronic fund transfers, poured in over the weekend, with 4,655 payments logged Saturday and Sunday alone. A few more checks may arrive in the next couple of days; they will be accepted for Jan. 1 coverage if postmarked by Dec. 28.

(sigh) OK, this confuses things a bit, but at least we're approaching a baseline number, and this raises the total QHP selections a bit further:

Through the end of the day Sunday, Dec. 28, 49,901 people had paid and enrolled and 27,647 had selected a plan. We don’t have a break-out of January versus February start dates from these numbers.