MA has extended the payment deadline until 12/28, so the other 34K still have 5 days (including today) to make their first payment; if they miss that deadline but still pay up, they'll still be covered starting on February 1st.

Assuming 25,200 of these folks make their first payment by the 28th, they'll hit my 88% "rule of thumb" rate for January. Over 8,100 people made payments yesterday alone, so I'm not terribly concerned about this issue. It'll be interesting to see how many make the cut, given all the "but how many have PAID???" fuss and bother last year (last year, MA & WA were the only states which reported paid only numbers to HHS, but it was still messy in MA's case given their technical problems).

In addition, there's another 65,261 QHP determinations which haven't actually taken action yet (out of 139,464 total QHP determinations); presumably most of these will select/pay for a plan for February coverage...and there's still a couple hundred thousand people in "temporary" coverage in MA who are scheduled to be "released" onto the ACA exchange in tiered groups through January and February, so don't be surprised if MA continues to heavily outpace most states during what should otherwise be a relatively quiet time on the other exchanges.

Finally, but just as importantly, Massachusetts has already enrolled a whopping 124,050 people into MassHealth (Medicaid). 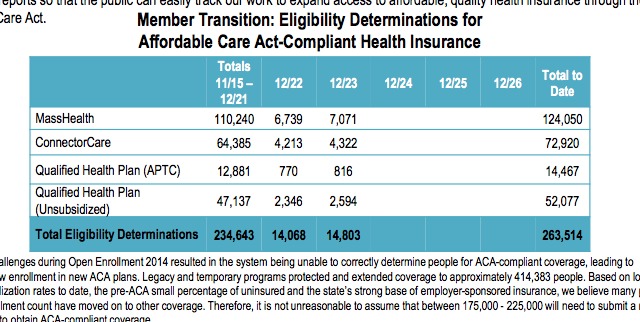