Vermont needs a $2.5B Kickstarter Campaign.

I haven't written much about the recent announcement by Vermont's governor that after years of pushing a single payer plan for the state, he's basically pulled the plug on it (at least for the time being). I noted the announcement but didn't have much to add myself.

One such person is Vox's Sarah Kliff, and she's written a fairly definitive explanation of what went wrong. The short version: Vermont's tax base is too small to support the initial costs, even if it would save gobs of money in the longer term.

In Vermont, this is massive: the state only raises $2.7 billion in taxes a year for every program it funds. Early estimates said that Vermont's single-payer plan might need $1.6 billion in additional funds — a huge lift. But $2.5 billion was impossible.

Read the whole thing. It goes into the original plan, what changed and so forth. In the end, the problem is not that single payer doesn't work--plenty of other countries have shown that it can work remarkably well at a far lower cost than our own system, which is why a substantial number of Americans support it in the first place--but because there are so many entrenched interests and moving parts involved that the transition period would be extremely costly in the short run, since many people & businesses would effectively be dealing with paying for two different systems at once.

Case in point: Out-of-state commuters (Vermont is bordered on 3 sides by NH, MA & NY, after all):

Shumlin decided recently, after getting input from the business community, that Vermont's program should cover out-of-state commuters who work in the state. It would be too complex, business owners advised, to have to offer something separate to employees who came in from New Hampshire or Massachusetts each day...Covering more people meant spending more money.

More to the point:

In a way, the fact that America hasn’t taken serious steps to control health spending makes it particularly hard for the country to move to a single-payer system in the future. Our health-care system costs $2.8 trillion annually, about 17.7 percent of the entire economy. This is way more than any single-payer system anywhere in the world costs.

This is the Catch-22 of single payer for the U.S. There are so many moving parts that making the move all in one shot is next to impossible...yet doing so incrementally also means a painful, multi-year transition period. Ironically, even though Vermont is the state with the strongest political/social will to go for it, the specific demographics of the state (small population, low tax base, high border flow) make doing so there especially difficult.

I'm no expert, but based on these factors it sounds to me like Hawaii is probably more likely to be a SP pioneer. Their population is still small, but is more than twice that of Vermont, and I don't imagine that they have a whole lot of cross-state commuters given that it's over 2,000 miles away from the next closest state. In addition, HI already has one of the lowest uninsured rates in the country, so I'd imagine that moving to SP would be less of a shock to their system than most states. 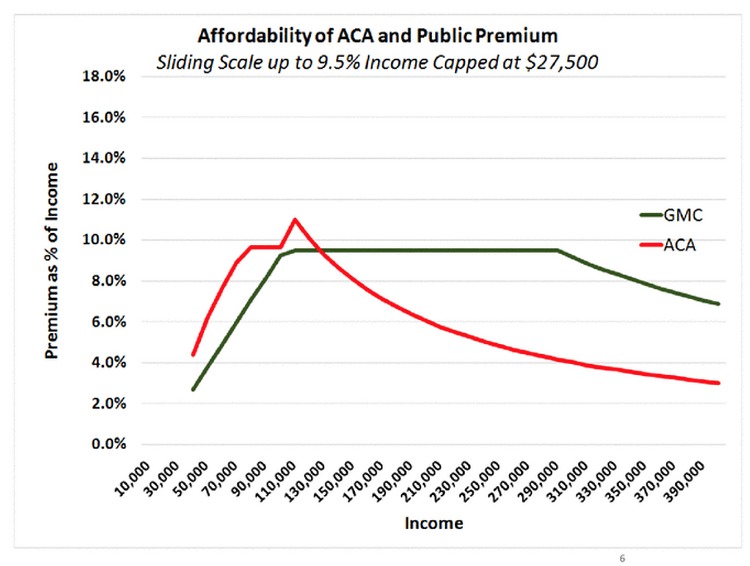 Single Payer would be considerably less expensive for anyone making up to around $130,000 per year, but would become more expensive as a portion of income above that point. That pretty much says it all.

As for Vermont, it sounds like they need a one-time Kickstarter campaign for the first year if they still want to make this thing work. If 25 million people chip in $100 apiece...

In any event, it sounds like for good or for bad, the ACA is going to be the best significant heatlhcare reform system change we're likely to see for awhile, so it behooves everyone to make it work as well as it can.