On Friday I discovered that my estimate of roughly 60% of Massachusetts "determined eligible for QHPs" actually selecting a plan was way too high; the actual ratio was closer to 48% overall, meaning that my prior estimate of about 62K QHP selections was too high; the actual number was 53,490 as of Thursday the 18th, which is still excellent, just not as great as I thought it was.

Today I received confirmation directly from the exchange that total enrollments (ie, selected plans) are up to 61,470 as of this morning, which means that the ratio is indeed starting to move up, just later and not as quickly as I had thought (61,470 / 124,403 QHP determinations is just shy of 50%).

In addition, they've confirmed that the payment rate, which was at 34% as of last Thursday, was up to 41% of the total as of this morning. The official payment deadline is also tomorrow night, though for all I know, they may have some sort of grace period involved for special cases (payment stuck in the system or whatever). Presumably they're being bombarded with plan selections and payments today, with a massive spike today & tomorrow, followed by some sort of a press release on Wednesday with the official tally.

In fact, the MA exchange is already reporting massive traffic:

In the meantime, that's 61,470 confirmed QHPs and over 110K confirmed Medicaid enrollees through Sunday night. 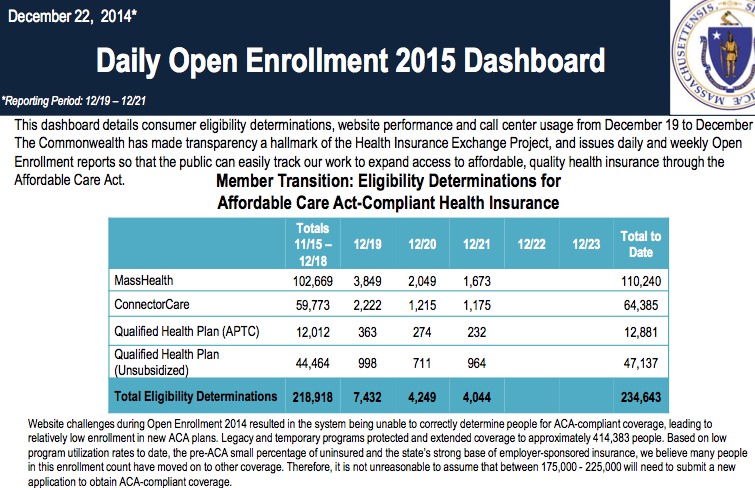