Has HC.gov just tipped their hand as to the confirmed payment rate so far? (UPDATE: Never mind...)

Yesterday on HealthCare.Gov's Facebook page they posted a seemingly innocuous but rather curiously worded post/promo: 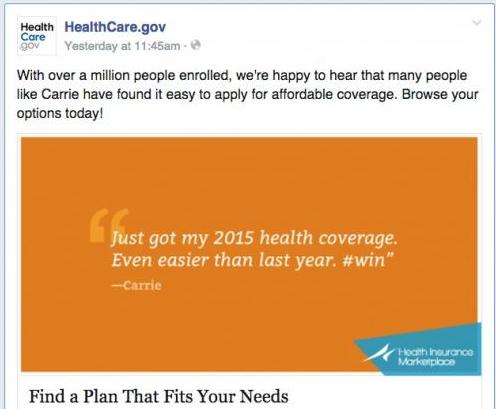 I'm not sure what to make of this. "Over a million people enrolled" it says. The embedded image specifically refers to 2015 coverage (and of course that's what they're pushing hard right now). Yet the most recent HHS Dept. weekly "snapshot" report has the number of plan selections as 2,446,562.

So, what does "over a million" refer to? Well, it could be a couple of things. It's most likely referring to the 48% of those who are new enrollees (around 1.17 million)...but if that was the case, it would make more sense to me to include the confirmed renewals for 2015 as well and say "more than 2.4 million enrolled."

Alternately, it's also possible that HHS has managed to confirm the January premium payment for at least 1 million of those 2.44 million. That would mean at least 41% have paid their first premium, which would be in the same range as the 34% payment rate that the Massachusetts exchange just reported.

Of course, last year HHS repeatedly claimed that their hands were tied when it came to the payment rates via HealthCare.Gov, since unlike a few state exchanges, I believe that payments via the federal exchange are still handled directly by the insurance companies (there's a big "Make Payment" button at the end of the HC.gov enrollment process, but it was still greyed out for us here in Michigan...presumably it'll be active sometime in the future...).

On the other hand, they also took a lot of heat for that, and it's possible that they've been working more closely with the major insurers (Blue Cross, Aetna, United Healthcare, etc.) this fall to get at least a general idea of how the January payments are flowing.

If so, this is actually about right. 41% may sound low, but a) that number could be a week or so out of date and b) again, most people don't send in payments for cable bills, utilities, etc. until just before they're due; I'm guessing that there are a flood of payments coming in even as I type this. Again, in the end, I'm still expecting about an 88% first-month payment rate, although some of them may not come in until as late as early January (remember, some insurers allow for a payment grace period of up to a couple of weeks).

UPDATE: Well, so much for that. HHS spokesman Aaron Albright just provided the answer succinctly:

In the words of Emily Litella... 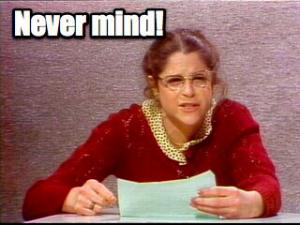