OK, I've been considering this for a few days now, but I wanted to wait for the actual 3rd week HC.gov snapshot to come in before committing to it.

Of that 12.0 million total, I figured that around 88% will (eventually) pay for at least their first month's premium, or around 10.6 million.

As for the 7.0 million 12/15 projection, that was including several million automatic renewals and assumed that all 50 states (plus DC) would have a 12/15 cut-off for January 1st coverage. As it turns out, that isn't the case--5 states have later January deadlines: 12/18 for MD and 12/23 for MA, ID, WA & RI, which means the big December surge will be spread out a bit more than I thought (of course, 3 of these states require everyone to manually renew anyway...or at least, to do so if they wish to receive tax credits, so the autorenewal issue is kind of moot for them).

The autorenewal question is still a huge one. In theory, up to 6.7 million people could potentially be autorenewed (except not really...again, several hundred thousand of these have to manually renew/re-enroll, so the actual potential pool of autorenewals is a bit lower; perhaps 6.3 million or so (?). I've been operating on the assumption that perhaps 6.1 million will renew, but until now I haven't tried to guess how many of those would be automatic renewals.

However, with 3 weeks worth of HC.gov data in, plus hard data from most of the state-run exchanges, the numbers so far seem to indicate that overall, roughly half of the estimated 2.63 million QHP selections are renewals. I presume that this percentage will only increase over the next few days leading up to the 12/15 (or 12/18 - 12/23) deadlines.

Based on this, as well as anecdotal evidence from major insurers, I now expect the total not including autorenewals to hit around 4.5 million by 12/15, with another 2.9 million autorenewals being piled on all at once the next day, with a breakdown of something like the following:

The ratio between these three will likely be somewhat different from the above, but however it breaks out, I'm increasing my 12/15/14 projection from 7.0 million up to around 7.4 million.

Things should drop off substantially across most states after that, except for the 5 noted above, which should result in a minor "mini-surge" over the next week, which I figure will bring the total up to around 7.7 million by 12/23.

Christmas, New Year's and the first week of January should then be pretty quiet, with a second "mini-surge" happening as January 15th approaches, which I'm now projecting should hit roughly 9.0 million (1M higher than I've estimated until now).

Essentially, I expect the total number to go up a half million, with another half million simply "shifting" from the 3rd month to the 1st month.

In light of all of these changes, I've also enhanced The Graph with several new features: 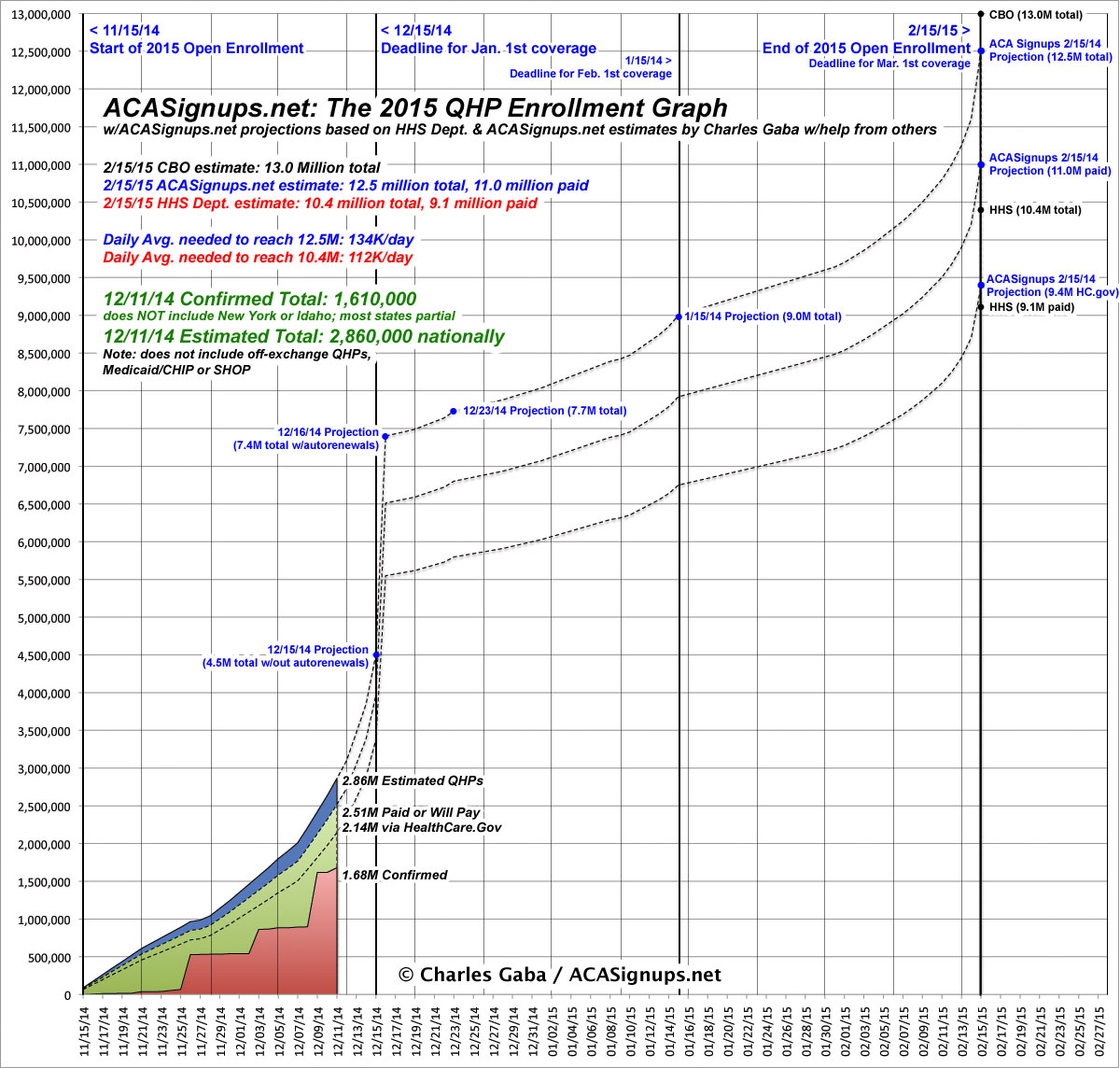 UPDATE 12/16/14: OK, after thinking over today's news, I've decided to bump up my short-term projections a bit after all...but not the final 2/15 total just yet:

As a result, The Graph now looks like the following: 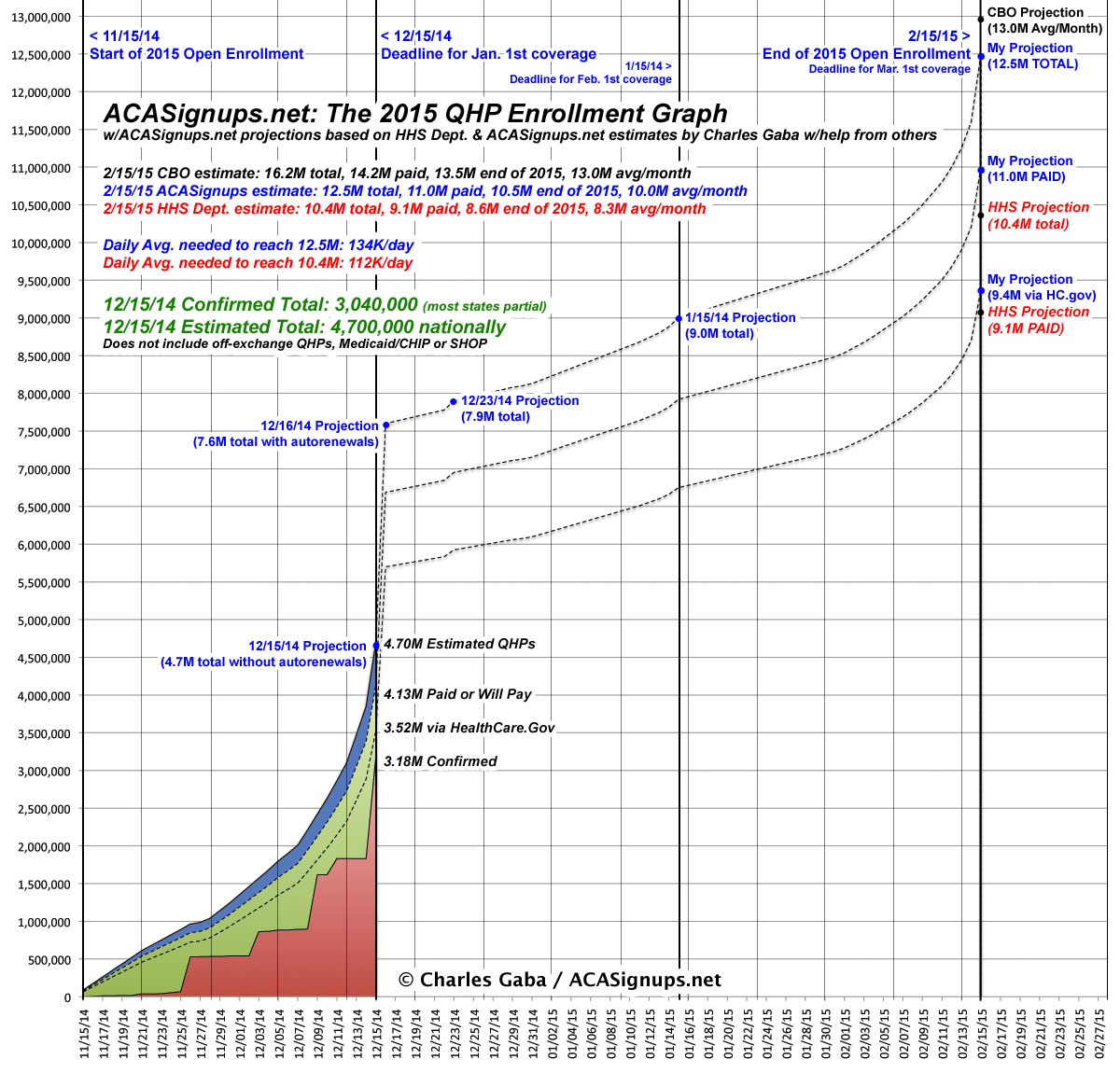