OK, this definitely makes me feel better about the confusing CoveredCA data release less than an hour ago, in which the data was so spotty it made figuring out how close I was next to impossible.

So, let's think about this. "Almost 1 million" suggests at least 900,000 people to me, and the "more" part makes it clear that he's referring to new enrollments, NOT renewals of existing ones.

The most recent official data point given was HHS's announcement of 765,135 plan selections as of 11/28 via HealthCare.Gov. They also announced that 48% of those were new enrollees, or around 367,000 people in the first 2 weeks of open enrollment.

Obama mentioned the "almost 1 million" right after the "nearly 7 million" which suggests he's talking about total enrollments, not just via HC.gov, which should only make up about 75% of the total. At any given time, the national QHP total (including California, Massachusetts, Kentucky, etc) should be roughly 1/3 higher than whatever the HC.gov number is.

...However, assuming that the new/renewal ratio is still roughly 50/50, the only way there could have been 900K new enrollments nationally already would be if the total number was already 1.8 million...and I'd bet that was as of Friday night, not as of yesterday, since they had to have time to write up the segment. He was gonna want to be certain. 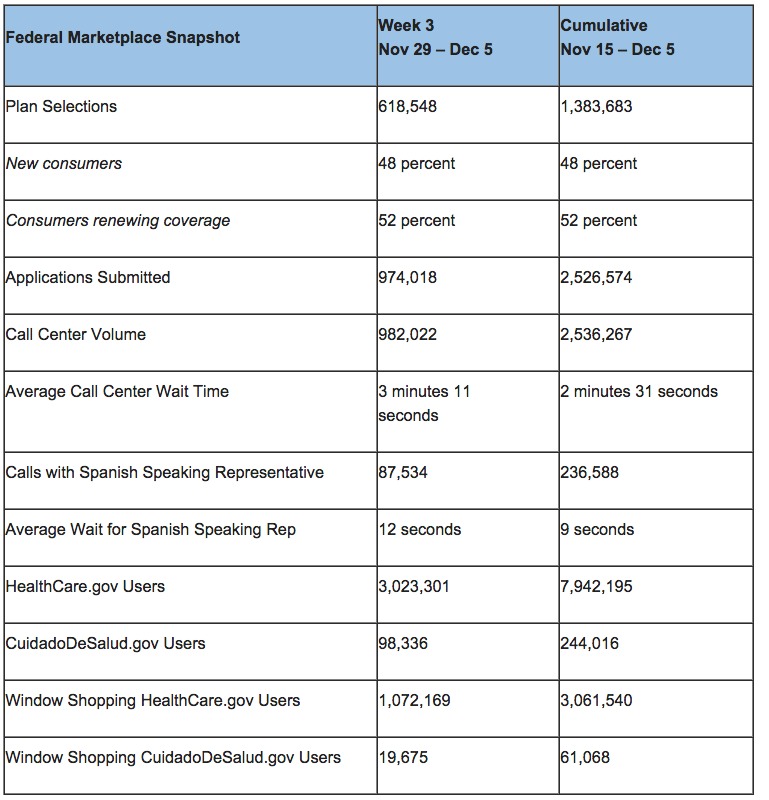 So, what does this mean nationally? Well, it means that not only was I correct about the Week 3 trajectory, I'm a hell of a lot more confident about the current Week 4 "ramp up"...except for the confusing California data. Because CA represents roughly 18% of total enrollments, that's still a big chunk of uncertainty. If they had just included the renewals along with the new enrollments...but they didn't, and said they don't plan to until January, so there you have it.

That being the case, it still sure looks like my estimate of 1.8 million (nationally) as of 12/05 was pretty close, which also means that the number has likely indeed reached over 2.42 million as of yesterday (12/09).