Urban Institute: Uninsured rate dropped by 30% as of September

Over the summer, five different respected national healthcare studies agreed that the overall uninsured rate had plummeted by at least 25% from last fall through the end of June, 2014. The methodology varied a bit from one to another; some included all adults, others only included those under 65. Some included children under 18, others didn't. Some used the September 2013 as the starting point, others started with December 2013. Even with all of these variables, though, the consensus was a 25% reduction, from roughly 42.3 million down to around 31.3 million, give or take.

Today, one of the five, the Urban Institute, released an updated study which includes the third quarter of 2014, and as expected, the trend has continued:

They list a hard number of 10.6 million, which is actually lower than the 11 million in my links above. However, again, the methodology differs from study to study; the Urban Institute's June survey chalked up the reduction as just 8 million at the time, while the others were as high as 12 million (or possibly 13 million if you add another 1 million children, who weren't generally included).

My guess is that if Gallup, RAND and/or the Commonwealth Foundation do their own third-quarter surveys using the same methodology they did in prior ones, their third-quarter results will likely be several million higher than the UI's 10.6 million, just as they were for the June studies...with the concensus being somewhere in the range of 12-13 million. 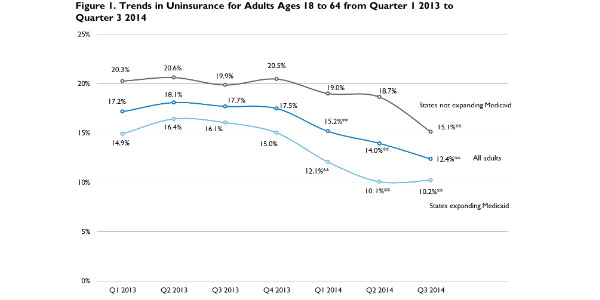