Daily Caller: The Stupid is strong with this one.

I was feeling kind of sour after writing my previous post about Sen. Tom Harkin's unhelpful comments today, so thanks to contributor "Dee" for cheering me up with this bit of idiocy from the Daily Caller from a woman named Sarah Hurtubise:

The number of Americans signing up for Obamacare coverage on HealthCare.gov slowed significantly in the second week of the open enrollment season for the health-care law.

Just over 303,000 people chose plans on HealthCare.gov between Nov. 22 and Nov. 28, down from 462,125 who selected insurance coverage on the federal website during its first week, the Department of Health and Human Services announced Wednesday.

Interest in window shopping on both HealthCare.gov and the Spanish-language version of the website, CuidadoDeSalud.gov also fell.

First: I don't know if you're an American citizen; I assume you are, but perhaps not. Just in case: Last week there was a little something called "Thanksgiving" which took place. Generally speaking, most people don't tend to feel like filling out insurance forms on Thanksgiving; they usually prefer to spend the day eating turkey, watching football or watching Jennifer Lawrence wearing skintight outfits and shooting arrows at people (I haven't actually seen either Hunger Games movie, mind you; just judging from this photo).

As a result, it's not particularly surprising that both applications as well as enrollments were down considerably the second week vs. the first. Why, I even wrote up a post about this in Massachusetts for you. There was a chart and everything:

Yup, sure enough, 11/27 was Thanksgiving, and lo and behold, only 790 people in MA decided to fill out their TPS reports that day. The rest decided to give it a rest until Friday. And what happened Friday, you may ask? Why, it shot right back up again.

However, that's actually only part of my point. Yes, even if you account for 1/7th of the week understandably only racking up 17% of the daily average, that still only explains about half of the 34% drop in enrollments, or the 50% drop in applications.

However, you know what does? Well, let's take a ride in the Wayback Machine, shall we?

See that spike in the 3rd week of December of last year? Yeah, that was called the "December Enrollment Surge". You might have read about it in a paper or two.

Then, take a look at the last two weeks of March 2014, and the first week or so of April. I know it was a lonnnnnng time ago, so think hard. Yeah, around 2.9 million people enrolled in that period. It looked a little something like this: 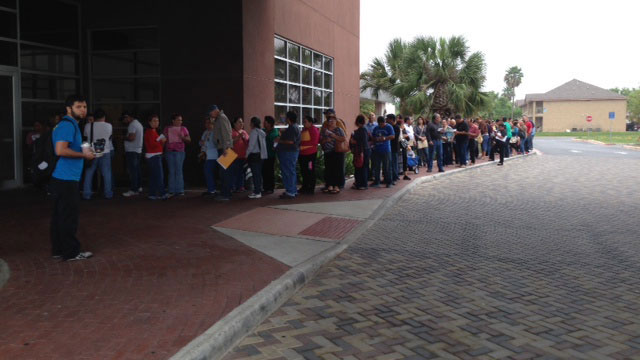 I know this will come as a shock to you, but while there are some people who like to do stuff as early as possible to get it out of the way (thus the initial mini-surge I was already expecting), there are also lots of people who tend to wait to do stuff until a deadline for doing so is approaching.

Not to mention that this time around, there's a good 4-5 million of them who don't have to actually do anything to renew their enrollments. Don't get me wrong; I've been a strong advocate for them to actively log into their account and shop around instead of passively autorenewing...but a lot of people are going to do just that, for good or for bad.

Anyway, thanks for the laugh.