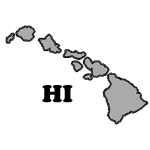 Top contributor deaconblues is back in action with three updates today: First up, Hawaii:

HONOLULU — Hawaii's health insurance exchange enrolled more than 40 people on the first day clients were able to sign up to be covered next year.

Another 60 applied for financial assistance to pay for premiums as of mid-afternoon, Jeffrey Kissel, the CEO of Hawaii Health Connector, said Saturday.

The insurance exchange expected to serve over 1,000 clients, either online, over the phone or in person by the time it closed for the day at 8 p.m.

As db notes, and as I noted in my Vermont/Massachusetts post this morning, the numbers may be tiny but it's symbolically very important, especially for the exchanges which had so many technical problems last year. Hawaii didn't get nearly as much press as OR, NV, MA, VT or MD, but they did have severe problems as well.

Combine that with the fact that it's such a small state which already had such a low uninsured population to begin with, and enrolling "only" 40 people or so on Day One is still an important starting point for their 2015 narrative.