OK, the numbers are small, but it's a start--and the fact that both are being released by states which had horrible technical issues last year is quite telling:

Vermont Health Connect processed 50 new applications and 201 renewals by Saturday at 1 p.m. The exchange was working well with some isolated minor issues in the morning that were quickly resolved, he said.

Either way, this is already a quantum leap ahead of last year. Massachusetts eventually did enroll about 34,000 people, but almost all of those were people paying the full premium price. They only enrolled around 700 who received tax credits, being forced to shove nearly 300,000 others over into "healthcare limbo" for the bulk of this year.

UPDATE: I've also confirmed that the 1,704 figure does refer to individuals, not households. It's important to know that sort of distinction right off the bat.

Ms. Freyer's story in the Boston Globe also answers another question I had. Last year, the Massachusetts exchange was set up to require payment at the time of plan selection, thus effectively meaning a 100% payment rate for the officially reported enrollment data. Granted, their technical problems probably meant that this didn't play out quite as planned, but that was the idea.

This year, it appears that while online payment may still be required, it's not necessarily a mandatory part of the enrollment process:

This being the case, I'm keeping MA's eventual "Paid" rate at the same 88% that I have every other state at for the moment.

In fact, I've even plugged in the first numbers into the spreadsheet! Granted, they're a bit difficult to find... 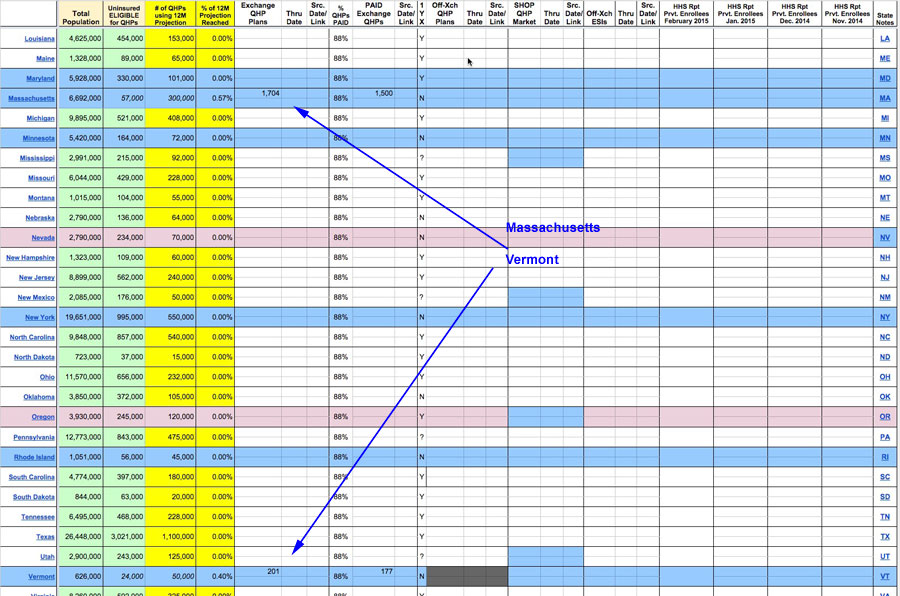