I was cleaning up The Spreadsheet earlier this evening to prep it for the 2015 Open Enrollment Period. Most of the changes involve simply stripping out the OE1 numbers so I can start all over again, but there's some other changes which true data geeks will notice, including:

For the most part, these are straight-line 50%-increase projections over last April's total for each state (or close to it), just as the 12.0 million is a straight 50% bump over the 8.02 million total. However, there's a few states which are noteworthy:

So, there you have it. I realize that it's pretty much insane for me to try and drill down to that level of detail, but what the hell. My official state-level exchange QHP projections for the 2015 Open Enrollment Period are: 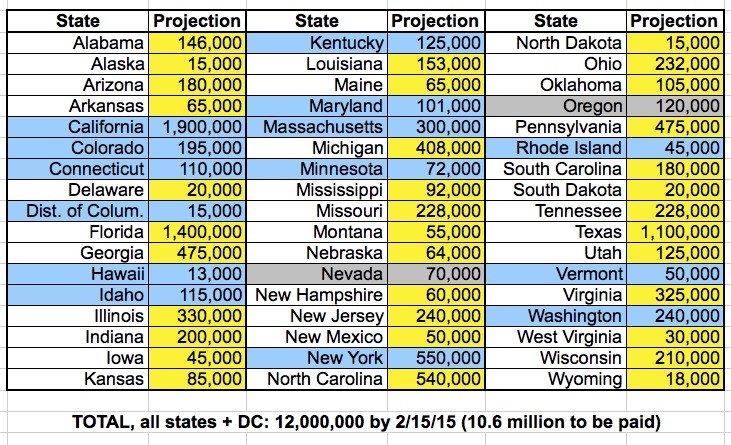 UPDATE: As I noted on December 11th, I've since bumped up my total projections a bit to 12.5 million. As such, the state-level projections are also obviously a bit higher now.

Instead of whipping up a new graphic, just visit The Spreadsheet to see the revised state-level projections and how close each state is doing so far (remember, the autorenewals for most states haven't been broken out yet, so just focus on the state-exchange lines along with Oregon and Nevada for now).