Good News: 56% of QHP attrition due to citizenship/immigration data issues

Regular readers know that the current QHP enrollment tally for the ACA, which started at around 7.1 million on May 1st (around 900K of the 8.02 million who enrolled through 4/19 never paid their first month's premium), gradually increased over the summer to a peak of around 7.3 million as of August 15th before dropping back again into autumn...right back down to around 7.1 million again as of October 15th.

At the time, ACA critics Megan McArdle and Bob Laszewski were speculating that there would likely be a substantial drop-off after the August peak due to the "3 month grace period" factor: That is, under the ACA, insurance companies aren't allowed to kick people off of their policies for non-payment of their premiums until after that payment is at least 3 months past-due. Their reasoning was that a whole bunch of people had enrolled in the spring, made a single payment but then blew it off for the rest of the summer, mooching 4 months worth of healthcare coverage for the price of one before getting kicked to the curb.

I thought it was an interesting theory which would have at least explained why the 7.3M figure was abruptly given out after months of radio silence from HHS. All year I've only found a single data point about the "3 month grace period" item: Arkansas, which reported only having 2.1% of their enrollees in that status a month or so ago. Still, 2.1% out of 7.3 million is 146,000 people, so it could have been substantial.

The other major potential contributor to a post-August drop-off was the "immigration/citizenship data inconsistency" issue. As you'll recall, several hundred thousand enrollees had issues with their legal status paperwork/documentation. It was originally 966,000, then whittled down to 115,000. Since undocumented immigrants aren't allowed to enroll in ACA policies, HHS had announced that anyone who wasn't able to prove their legal status by the end of September or would be dropped. I even ran a full story over at healthinsurance.org in which I estimated, based on the hard data coming out of Covered California, that the total number dropped for legal status reasons might end up being as little as 20,000.

Well, today it can be revealed: It was somewhere in between my assumptions and McArdle/Laszewski's:

According to CMS, 120,000 households will see their subsidies adjusted as of Dec. 1 for failing to provide documentation verifying that the income noted on their exchange applications is correct. That number is down from 1.2 million households in May, and 279,000 in September. The agency also reports that 112,000 people with citizenship-related data matching issues had lost exchange coverage, but 4,500 have since submitted documentation and are eligible to re-enroll through a special enrollment period.

So, why am I calling this "Good News"?

However, there's also another important thing to note here: The immigration/citizenship issues are likely to be greatly reduced next year, as HC.gov and the state exchanges become more sophisticated about verifying enrollee data at the point of enrollment (or soon thereafter). They'll also have greatly updated their information databases, so any discrepancies should be flushed out sooner. This should be the case regarding the other 120,000 who had their tax credits modified due to income data discrepancies (which may account for some portion of the other 88K drop as well).

Look at The Graph again. The current enrollee number was continuing to increase gradually throughout the spring and summer. The only change which seems to have stopped this trend are the factors above, which should be greatly curtailed in future years. In short, whatever the 2015 QHP total ends up being, the "drop off" shown on the last 4 months of The Graph will likely be a flatline or at least less steep a year from now. 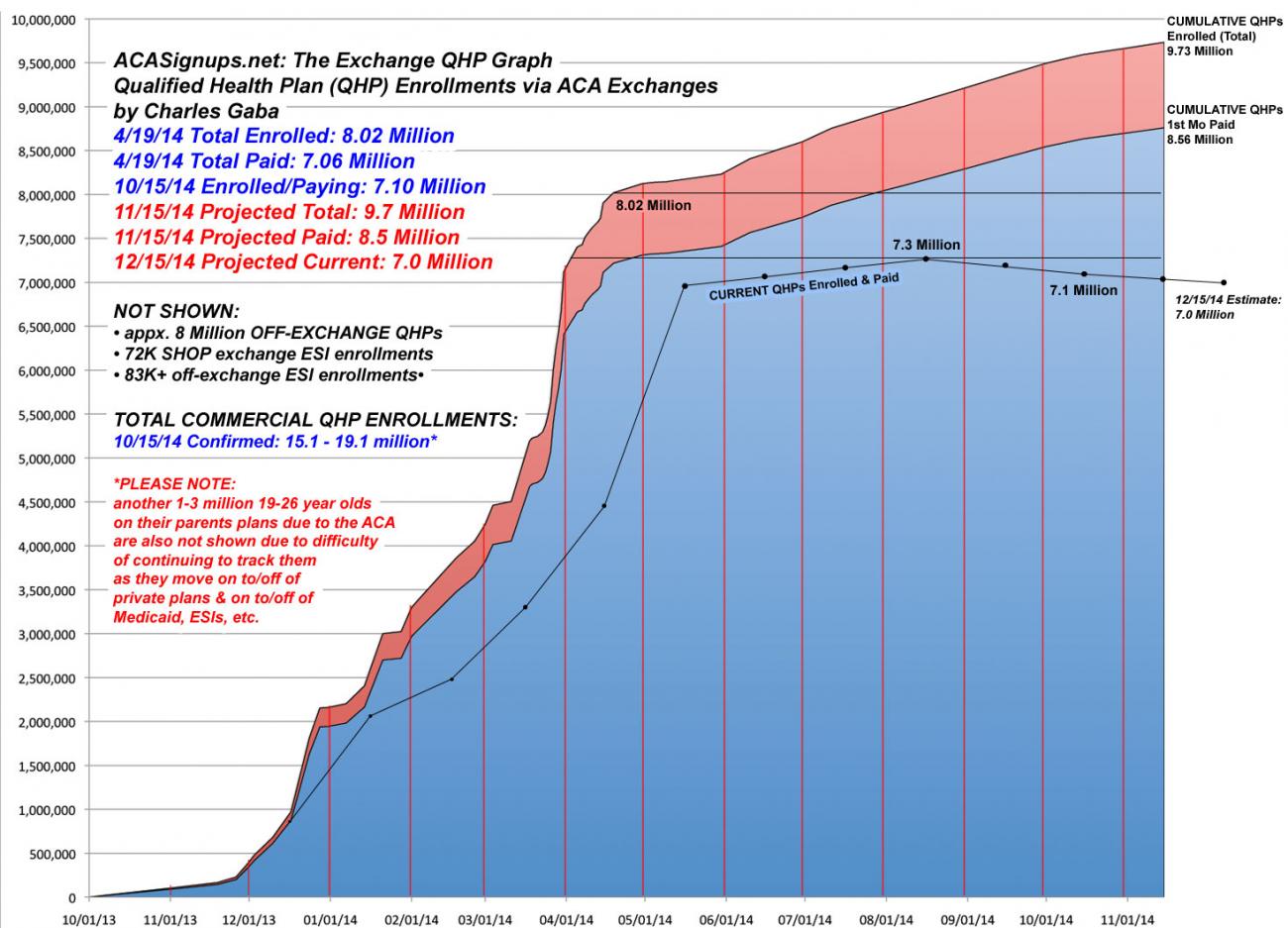