Everything that needs to be said about the new "Jon Gruber stream of consciousness" video in one Twitter exchange. 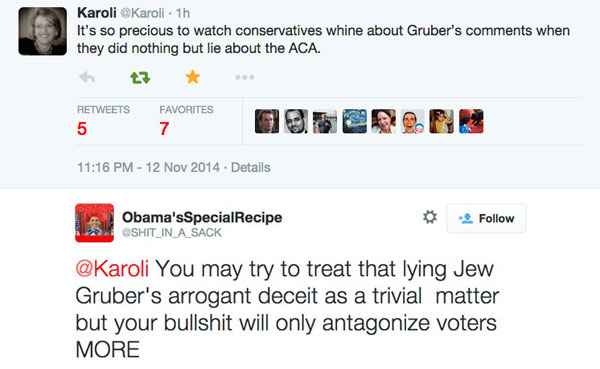 I'd say you just proved her point, jackass.

As for Gruber, all I'll say is that I hope Obamacare covers Foot-in-Mouth Disease, but I don't see what he actually said as being all that devastating. As Kevin Drum noted:

But if we can take just a half step up from radio yammerhead land, did Gruber say anything that isn't common knowledge? I'm not playing faux naive here. I'm serious. Basically, Gruber said two things.

First, he noted that it was important to make sure the mandate wasn't scored as a tax by the CBO. Indeed it was, and this was a topic of frequent discussion while the bill was being debated.

...As for risk-rated subsidies, I don't even know what Gruber is talking about here. Of course healthy people pay in and sick people get money. It's health insurance. That's how it works.

One other thing: Based on this profile of Rich Weinstein, the guy who's dug up Gruber's "diarrhea of the mouth" clips, his story actually doesn't sound all that different from my own last winter/spring: He's a regular schmoe who simply did the basic research that no one else seemed to be doing, came up with some notable results and is now experiencing his own 15 minutes of fame. While we may be coming at the ACA from opposite political stances, I can't fault him for that.