Things have been so crazy this week between the horrific midterm election results and today's unexpected SCOTUS/King/Halbig announcement that once again, my in box is crammed full, so here's some quick takes:

"I know it's going to be biased, but I think for the most part I think it's good to help families who do need that assistance," Jake Gourley said.

"I think what we're starting to see in some of the states that have already expanded it that there are more benefits than costs to it, it would be foolish for us not to expand it," David Starks said.

According to our scientific poll of those who responded, 45 percent support expanding Medicaid, while 37 percent oppose it. 18 percent are undecided.

Regardless of whether you support or oppose private insurance companies vs. a public option or single payer, I think it's safe to say that one of the things which has irritated me the most over the past year is the fact that some insurance companies go by up to 4-5 different names depending on which state they're operating in, which subsidiary the policy is being sold through and what the branding/marketing effort of the week is.

For example, here in Michigan, it was months before I realized that "Blue Cross Blue Shield of Michigan" and "Blue Care Network" are the same company, just different divisions (one handles the HMO side, the other the PPO side). Stuff like that makes it incredibly confusing when I'm trying to track down enrollment data.

That's pretty minor league stuff, however. Check this out:

Well, now; that cleared everything up. Fortunately, they've made a big branding announcement:

WellPoint, one of the largest investor-owned health insurers in the country, is looking to rebrand itself as Anthem, the company recently announced.

WellPoint’s CEO Joe Swedish said the change was in an effort to better connect with consumers in a “radically changing” healthcare environment.

...The Anthem name will hopefully eliminate brand confusion among its 48,000 employees and large provider network, according to Swedish.

CONNECTICUT: Access Health CT hopes to increase #OE2 enrollment by over 40% over this year:

Access Health CT, the state's online marketplace, will be able to accept new enrollees from Nov. 15 through Feb. 15 for coverage for 2015. The goal for this enrollment period is to cut the number of the state's uninsured in half, to 2 percent, by enrolling about 33,000 people currently uninsured. During the inaugural enrollment period of the marketplace, created as the state's response to the federal Affordable Care Act, 256,000 people signed up for either private insurance through one of three companies, or Medicaid. About half of them previously had been uninsured. The state's uninsured rate before the marketplace opened was about 8 percent.

Connecticut's current exchange QHP enrollee total is just over 76,000. Since they've pretty much maxed out their entire Medicaid-eligible population already, that means that practically all 33,000 of the additional people they're targeting would have to be added to the private QHP side, for a total of around 109,000 by the end of the 2nd open enrollment period.

WISCONSIN: A few people have inquired about the "metal level" breakdown of QHP enrollees by state. I don't know of a comprehensive state-level breakdown, but this ind-depth PDF file for Wisconsin is chock full of healthcare geek data, including the metal levels selected for 5 midwest states: 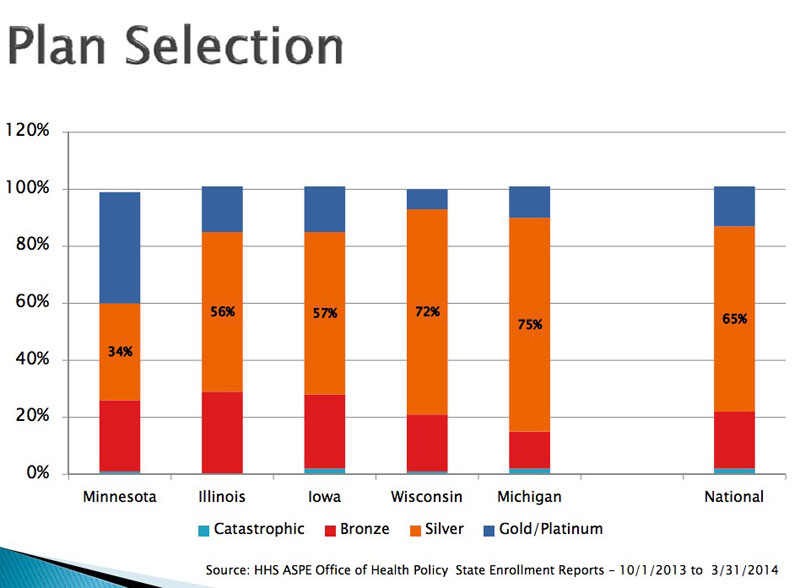 Vermonters receiving premium subsidies through the state’s health insurance exchange will have an additional form to file with their income tax returns, and the state is preparing to help.

This is the first year that the Affordable Care Act will affect tax returns, and state officials are expecting a good deal of confusion.

Those below the federal income tax filing threshold of about $10,000 for an individual or between $14,000 and $20,000 for a family won’t be affected because they won’t have to file a return.

People above the filing threshold must report that they had health insurance or they will owe a penalty, known as the shared responsibility payment.

“We’ll do everything we can short of giving people tax advice,” Devon Green, special counsel on health care reform, told lawmakers this week.

VERMONT (a twofer): STUDY: HEALTH CARE REFORMS COULD SAVE PROPERTY TAXPAYERS TENS OF MILLIONS OF DOLLARS

Taxpayers and school districts could save tens of millions of dollars if school staff were insured on the Vermont health care exchange or through a single payer system, according to a new report.

Districts could see a $39 million statewide drop in health care premium costs if school districts offered gold level insurance plans to school staff under the exchange, according to the report, which was commissioned by the Vermont School Boards Association.

Under a single payer initiative, school districts could save between $83 million and $119 million in premiums, and taxpayers would see a drop in property tax rates of between 8 cents and 12 cents per $100 of assessed property.

The exchange's Web portal remains offline, and the state and its contractors are processing changes manually, even as hundreds of new requests come in each day.

State officials say they are on track to have the site back up before the next open enrollment period begins on Nov. 15, though they don't have an exact timeline.

...The exchange had a backlog of untouched change requests that Optum, since being hired in June, has worked to eliminate. Optum also helped create a process to elevate cases where a change could impact the customer's access to care.

The backlog reached a high of more than 15,000 in August. Since then, the state and call center contractors have closed out more than 19,000 cases, but the backlog still sits at 3,300.