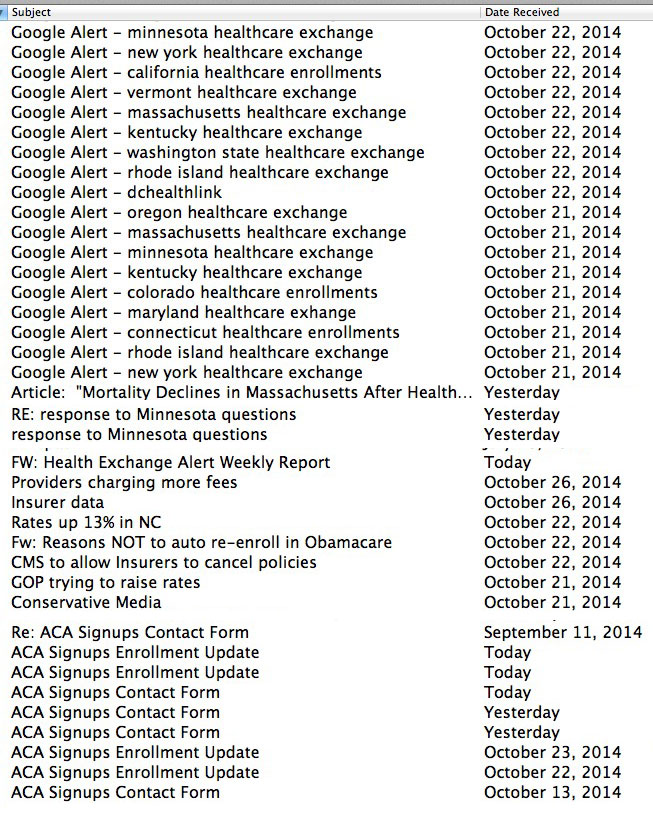 Between the impending election on Tuesday, the upcoming 2nd Open Enrollment Period (henceforth to be designated "OE2" or hashtag #OE2) and a serious technical crisis with my day job which I've had to spend the past few days cleaning up, I have upwards of 150 ACA/Obamacare-related emails clogging up my In Box.

Most of them are worth a mention, but there's no possible way I can do a full entry / commentary / analysis on most of them, so I'm just doing roundup-style summary mentions:

Supreme Court justices have their first chance this week to decide whether they have the appetite for another major fight over President Barack Obama’s health care law.

...The appeal has arrived at the Supreme Court at a curious time; there is no conflicting appeals court ruling that the justices often say is a virtual requirement for them to take on an issue.

...For a brief period, there was a split between appellate courts...But last month, the entire Washington appeals court voted to rehear the case and threw out the panel’s ruling, eliminating the so-called circuit split. The appeals argument has been scheduled for mid-December, meaning a decision almost certainly would come too late to be considered by the Supreme Court this term.

As insurers ratchet down payments to physicians and hospitals, these providers are pushing back with a host of new charges: Ophthalmologists are increasingly levying separate “refraction fees” to assess vision acuity. Orthopedic clinics impose fees to put an arm in a cast or provide a splint, in addition to the usual bill for the office visit. On maternity wards, new mothers pay for a lactation consultant. An emergency room charges an “activation fee” in addition to its facility charges. Psychologists who have agreed to an insurer’s negotiated rate for neuropsychological testing bill patients an additional $2,000 for an “administration charge.”

...Donna Frescatore, executive director of the New York Health Benefit Exchange, says New York state is making the necessary investment. She says the state’s website has new features and the state is training enrollers to explain the trickier parts of it, like those for the self-employed.

North Carolina's largest health insurer said on Wednesday that 2015 rates will rise by more than 13 percent on average for buyers of individual Affordable Care Act policies.

Obamacare isn't by any means a perfect law and not everything in it is going right. The law powers a different insurance market in every state (plus the District of Columbia), so it is perfectly possible for Obamacare to be a success in California even as there are troubles in Minnesota. And there continue to be operational issues: there have been troubling revelations about web site security, and problems verifying the incomes of some enrollees.

On the whole, though, costs are lower than expected, enrollment is higher than expected, the number of insurers participating in the exchanges is increasing, and more states are joining the Medicaid expansion. Millions of people have insurance who didn't have it before. The law is working. But a lot of the people who are convinced Obamacare is a disaster will never know that, because the voices they trust will never tell them.

Fox News admitted on Tuesday that a conservative-led lawsuit against the Affordable Care Act would raise health care premiums for millions of Americans. But then in its on-screen chyron, the network sought to attribute the increases not to the litigants involved in the case, but to President Obama, potentially confusing viewers.

“Could legal challenges to taxpayer subsidies put Obamacare in a death spiral?” Fox host Bill Hemmer asked, pointing to “a new study funded by the Department of Health and Human Services saying the health care law may be damaged beyond repair if you take the subsidies away, if they’re eliminated.”

WASHINGTON — With health insurance marketplaces about to open for 2015 enrollment, the Obama administration has told insurance companies that it will delay requirements for them to disclose data on the number of people enrolled, the number of claims denied and the costs to consumers for specific services.

A federal investigation into Cover Oregon, the state's failed health exchange website, has cost Oregon taxpayers over $146,000 so far. And that figure looks likely to rise.

So far, the law firm hired to represent the state in a pending FBI investigation has invoiced for over $123,000 and the state fund set up to represent employees embroiled in legal trouble has spent over $23,000, according to records obtained by GoLocalPDX.

More than 12,000 people who purchased policies through Cover Oregon could owe a combined $1.12 million at tax time because of errors in subsidized premiums issued by the health insurance exchange.

The vast majority of people affected are expected to owe no more than $10 per month that their policy was in effect. That figure is not final, however, because a $10,000 consultant's study intended to settle the question did not succeed. The exchange is planning to commission a second, more in-depth study.

Senate Minority Leader Mitch McConnell, R-Ky., has made a habit of saying during his hotly contested race for re-election that repealing the Patient Protection and Affordable Care Act would not necessarily mean shutting down Kentucky's popular insurance exchange that was established under the law.

The claim leaves many experts puzzled.

As we approach the beginning of the second open enrollment period under the Affordable Care Act, Walter Zelman describes an effort he led during last year’s initial open enrollment period to enroll students in the California State University (CSU) system in coverage. Part 1 below provides background on the CSU system and the enrollment effort, the CSU Health Insurance Education Project, as well as a discussion of what worked well.

Right now, officials are hard at work determining a financing plan for the new system. They are hopeful that by January, a proposal will be up for public comment. The administration will then likely bring it to the Legislature.

"(Health care) becomes a public good or public service, kind of like the roads or schools and we would be shifting from paying the way we pay today, which is largely through private premiums," said Lunge. "We would move away from that to a publicly financed system, where we would all contribute based on our ability to pay. And that would cover the coverage for everyone."