How much WOULD it cost to keep Medicaid Expansion w/out the ACA? (UPDATED)

Many Republicans are caught in a quandary when it comes to the Affordable Care Act. They hate the fact that a black Democrat implemented their own law nationally, they hate poor people getting healthcare coverage at little cost to them and they hate middle-class people getting healthcare coverage at a price they can afford. However, they love getting elected/re-elected. So, what's a good Republican candidate to do?

Well, for Mitch McConnell, many GOP Governors and other Republican candidates, the answer seems obvious: Repeal the Affordable Care Act nationally while at the same time changing the laws at the state level to increase eligibility to the same 138% FPL (Federal Poverty Level) threshold included in the ACA.

There's just one little problem with this: Under the ACA, the federal government covers 100% of the cost of the additional Medicaid/CHIP enrollees for the first 3 years, gradually dropping down to 90% of the cost, where it stays permanently:

If the ACA were to be repealed, however, the 26 states (plus DC) which have expanded Medicaid via the ACA would have to either kick all of their newly-enrolled Medicaid recipients to the curb or pick up anywhere from 29% - 50% of the tab themselves, instead of paying $0 for 3 years and no more than 10% after that. Since states are required constitutionally to balance their budget every year, if they chose to keep the expanded Medicaid/CHIP provisions, they'd have to either a) jack up state taxes to cover it or b) massively slash some other part of their budget.

I've already pointed this out repeatedly with regard to Kentucky, and recently made the same point here in Michigan and Ohio. Finally I decided to say to heck with it and add up just how much it would cost every Medicaid expansion state to do this. Using Medicaid Payments per Enrollee and Federal Matching Rate tables from the Kaiser Family Foundation, and the best estimates I have for current Medicaid/CHIP expansion enrollees, here's what it adds up to: 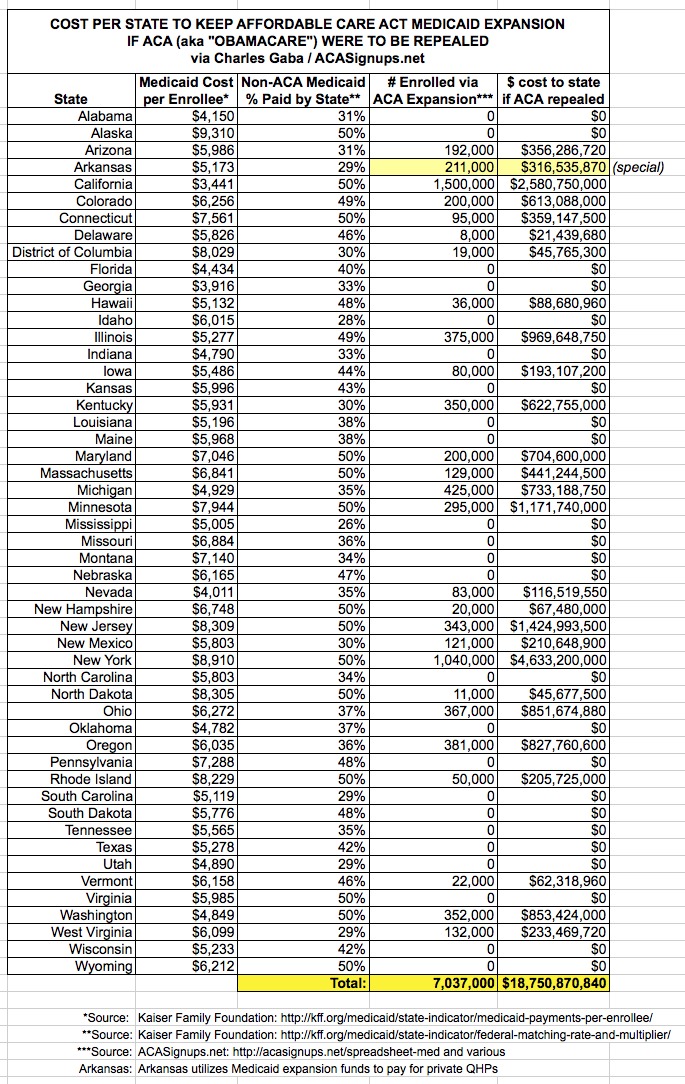 Yup. That's nearly $19 billion per year which would be required across those 27 states to cover the roughly 7 million people who only have Medicaid/CHIP coverage thanks to the ACA.

Now, I admit that it could be more nuanced than that. Perhaps there are other factors (efficiency of scale or somesuch) which would come into play and reduce the cost to the states to some degree. Perhaps I'm misunderstanding how the Federal Matching Rate applies. And of course, the states will still eventually be on the hook for 10% of these costs even with Obamacare in place.

You can argue about whether Medicaid is inefficient or whether it's too difficult to find a doctor willing to accept Medicaid patients. You can argue about whether these states should keep the expanded eligibility in place or not if the ACA was repealed. What you can't argue, with a straight face, is that you'd be able to keep the expansion in place without either a massive state tax hike or a massive state budget cut elsewhere. It's that simple.

1) First, this only covers the Medicaid/CHIP expansion provisions of the ACA, not the tax credits being provided to around 6.3 million people nationally. If the ACA was repealed and the states wanted to keep those in place, they'd have to jack up taxes (or slash other budget items) even more.

2) Second, it's been pointed out to me that the newly-added Medicaid recipients via expansion are likely to be healthier on average than most existing Medicaid recipients, and therefore are likely to cost less to treat, which would reduce the averages above. Good point. On the other hand, bear in mind that the numbers above only include expansion enrollees through September--the odds are that another 3-4 million will be added over the next year or so, which would cancel out any "savings" to the states if & when a theoretical repeal were to happen.