Now that Mitch McConnell is starting to feel the heat, he's decided to try and double down on the Evils of Obamacare by tying Alison Lundergan Grimes to the law (even though she didn't vote for it, seeing how she isn't, you know, a Senator yet).

So, he's started running a new ad in which a real-life doctor attacks Obamacare (mentioning in the "O" word 6 times in 30 seconds, if you include the on-screen text) while stating that Grimes supports it while McConnell wants to repeal it.

Naturally, the claims are squirrelly at best:

Reality: it provides access to care for a good 11 million people who didn't have it before nationally, and several hundred thousand in Kentucky specifically.

Reality: The ACA is the only thing allowing many people with diabetes to have insurance at all, since they'd be denied coverage for having a pre-existing condition otherwise

Reality: Their insurance policy was presumably cancelled because the policy either a) didn't provide full coverage even though the provider had over 3 years to bring it into compliance with the law, or b) because the provider just felt like cancelling that particular policy, which is something they do from time to time for pretty much any reason they wish, just like Apple can discontinue last years iPhone production anytime they wish.

Reality: No way of confirming or denying this without comparing her new policy versus her old policy.

Now, it's certainly possible that this last point is truthful. Just because every other on-screen "Obamacare destroyed my coverage!!" sob story aired by the Koch brothers to date has proven to be either a flat-out lie or wildly exaggerated doesn't mean that this one is.

So, assuming that Ms. Grimes is finally ready to punch back hard on the "O" factor, she can keep it equally simple: 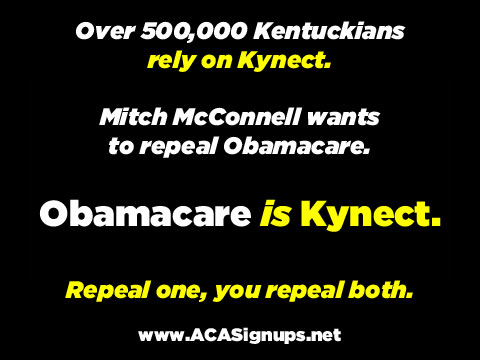 Will it work? Perhaps not. Apparently a lot of people who lovvvvve Kynect still haaaate Obamacare even when they know they're the same thing.

Still, I'd say it's worth a shot. There might be enough Kentuckians smart enough to get over their hatred of the ScaryBlackKenyanMuslimSocialist® long enough to connect the dots.

UPDATE: One More Thing: As a reminder, if McConnell were to repeal the Affordable Care Act (aka "Obamacare", aka "Kynect") and the state of Kentucky were to then "keep" Kynect in place, it would mean over $500 million in additional taxes for the residents of Kentucky.