Gallup has just released their latest nationwide, fully-detailed quarterly insurance survey, and the results are...pretty much exactly what everyone in the real world (as opposed to FOX News, etc.) has been reporting for months now. 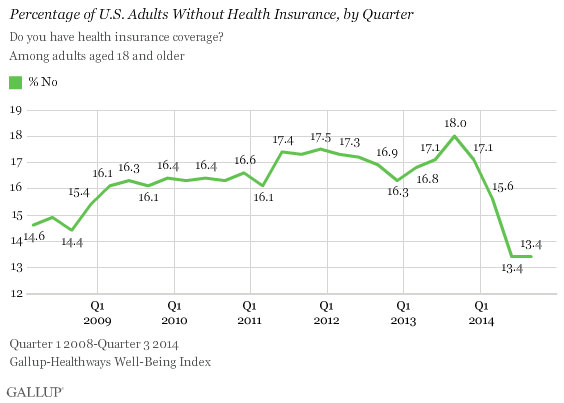 Now, both of these numbers are about 1 mllion higher than the most-recent surveys (the Census Bureau had last years tally at around 42 million)...but there's obviously going to be slight variances from one study to another (the Census still lists it as 13.4%, exactly the same as Gallup). Between rounding, slight population increases and so on, there will be some minor differences here and there, but the overall trend is very clear.

It's also important to remember that this survey, like similar ones by the Commonwealth Fund, the Urban Institute etc (all of which have found similar reductions in the uninsured rate) generally don't include children under 18, since I don't believe they can be legally polled. Kids generally are more likely to be insured anyway for various reasons, but if you add them to the mix I have to imagine that the net reduction in the uninsured is actually perhaps 1 million higher (around 12 million, give or take).

To be honest, I'm actually slightly bummed by this new study--while the rate holding steady is good news, I figured that the clearing up of the million or so Medicaid enrollees which were backlogged earlier this summer would drop the rate down even further. Still, it's possible that this is lost in the MoE/etc. I just noted above.

There's a lot of other interesting stuff to unpack here, but this one really leapt out at me:

Americans aged 26 to 34 remain the most likely to be uninsured, at 23.7%. Younger adults aged 18 to 25 were the most likely to lack health insurance until winter 2010, shortly after the provision allowing adults younger than 26 to stay on their parents' health plan took effect.

This would be the heavily-disputed "3.1 million young adults!" figure which the Obama administration was touting so much last year, and which has been the subject of much confusion and debate even among supporters of the law (such as myself).

However, the numbers speak for themselves: 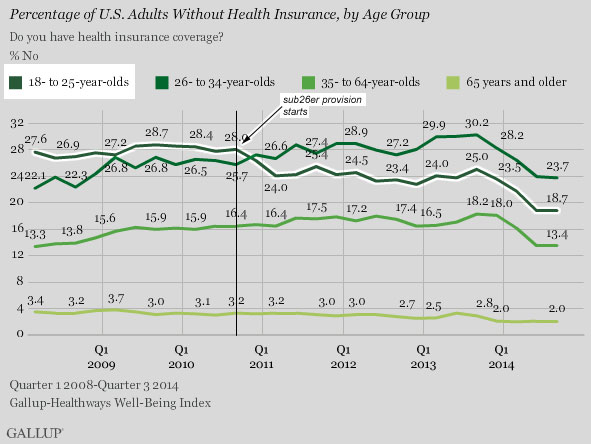 Gallup's conclusions are also pretty much what we already knew...although there's one rather curious data point to be found:

With the open enrollment period for 2015 coverage beginning on Nov. 15, 2014, the U.S. Department of Health & Human Services (HHS) is gearing up to enroll those still uninsured. In the first enrollment period, 10.3 million Americans successfully signed up for health coverage through the ACA health insurance marketplace.

...Still, there are some positive signs that the uninsured rate might fall more after the next open enrollment period ends.

Um...10.3 million? 8.0 million enrolled during the open enrollment period, not 10.3 million...and only about 7.2 million of those actually paid up. I've been more bullish about the off-season enrollments than anyone, and even I only estimate the current total enrollment figure to be around 9.5 million.

The only thing I can think of is that they're talking about the net gain in coverage since last fall (including Medicaid as well as private plans), which would range somewhere between 10-12 million depending on your source. Still, it's an odd way to word it.

Another interesting thing to note is that the uninsured rate among those 65 and over is actually 2% (though even this is down from 2.8% a year ago). About 44.5 million people are 65+, which means that around 890,000 seniors are still uninsured even with Medicare/etc. However, even this is down from around 1.25 million last fall. That's right: The Affordable Care Act has helped over 350,000 seniors gain healthcare coverage by one means or another.

In any event, this is further reassurance that yes, the law is working pretty damned well at one of its primary purposes.