(sigh) When I posted about Wal-Mart (yes, that Wal-Mart) embracing the ACA exchange system by opening up enrollment kiosks staffed by licensed brokers in 2,700 of its stores, some people were understandably suspicious of their motives.

While I still think that overall this is a good thing, less than 24 hours later, one of those motives just became pretty clear:

Wal-Mart told The Associated Press that starting Jan. 1, it will no longer offer health insurance to employees who work less than an average of 30 hours a week. The move affects 30,000 employees, or about 5 percent of Wal-Mart's total part-time workforce, but comes after the company already had scaled back the number of part-time workers who were eligible for health insurance coverage since 2011.

By an amazing coincidence, January 1st just happens to be the same day that new ACA-compliant policies purchased during the 2nd open enrollment period kick into effect.

By an even more amazing coincidence, I'm pretty sure that the "third-party organization" referred to is none other than...

...The stores will be staffed with independent insurance agents from DirectHealth.com.

So, with this move, Wal-Mart manages to cut the cost of insuring 30,000 of their employees by shunting them over to either a subsidized Obamacare policy (for which Wal-Mart might even receive a commission fee, although I'd guess that would go to DH.com instead) or, in some cases/states, Medicaid. Of course, in states where Republicans yanked the rug out from under the working poor by not expanding Medicaid, some of them will be simply screwed.

On the one hand, this is Wal-Mart at their slimiest. On the other, I've never cared for one's health insurance being joined at the hip with employment anyway.

UPDATE: Dammit. Thanks to Janet Weiner via Twitter for bringing my attention to this insurance agent forum which details the $500 "pay to play" policy which Wal-Mart appears to be utilizing for this project:

I received an email from my FMO in regards to working a Walmart this year.

Has anyone else has heard the same. More information?

"We would like to announce a new marketing alliance with Tranzac(Direct Health) whom Walmart has chosen to direct all Medicare Advantage and PDP
distribution through their stores. No longer will it be just one company offered as Walmart wants to offer multiple carriers so that their clients can have the best choice in their healthcare.

I called to get more details, and was told the following.

3. Agent must be certified to offer (3) different companies

4. Kiosk will be tagged and bannered with Direct Health signage

So, here is my question. Is this going on across the board? Or is this a "deal" my FMO is putting together?

Call me crazy, but I thought CMS prohibited agents from comparing plans?

OK, so that's a rounding error for WM, but still, a buck's a buck. If that was all there was to it, I wouldn't be too concerned; fair enough.

The larger concern is what sort of pressure/influence the agents are under given the circumstances. If they're all making the exact same commission/fee regardless of what policy the enrollee ends up purchasing (regardless of metal level, company, etc), then that's fine. If, however, they're receiving "spiffs" or bonuses for favoring one company over another, or a more expensive policy over another, that could be a problem and is one of the very things that I thought the ACA was supposed to help prevent from happening.

As for how it's actually going to work out, some of the agents themselves give some reality check opinions (a bit crudely stated, but...):

I agree. I worked last year and did ok. Nothing to write home about.
However, it was my first AEP and I thought "WHY NOT?"

I mainly said yes, to work Walmart for ACA, thinking it would be like taking candy from a baby. It wasn't. Lot's of too poor, no english, no job, no tax return folks.

Moved on to plan B really fast.

But.. it never hurts to see what is out there and weigh options.

A new agent will have a hard time "floating" money for a 6 to 7 month period, to play at Walmart. (You will begin sitting in August, to get all those SEP ACA folks)

Walmart sales are location, location, location. Blue collar town with a lot of SS only recipients are gold for MAPD's. Lots of well off retirees and ex-military, not so much. Lot of them have TriCare and Supps paid for by their former employers.

Humana told me they have 1st pick on locations. Not sure what that means.

UPDATE x2: OK, thanks again to Janet Weiner for the additional legwork! This is looking squirrellier and squirellier all the time:

She provided me a direct link to the promo/registration website...

...and when you go there, not only does it indeed concentrate on the AEP (Annual Coordinated Election Period, which only runs from 11/15 - 12/31), but I noticed something else which sets off huge red flags to me as a website developer: 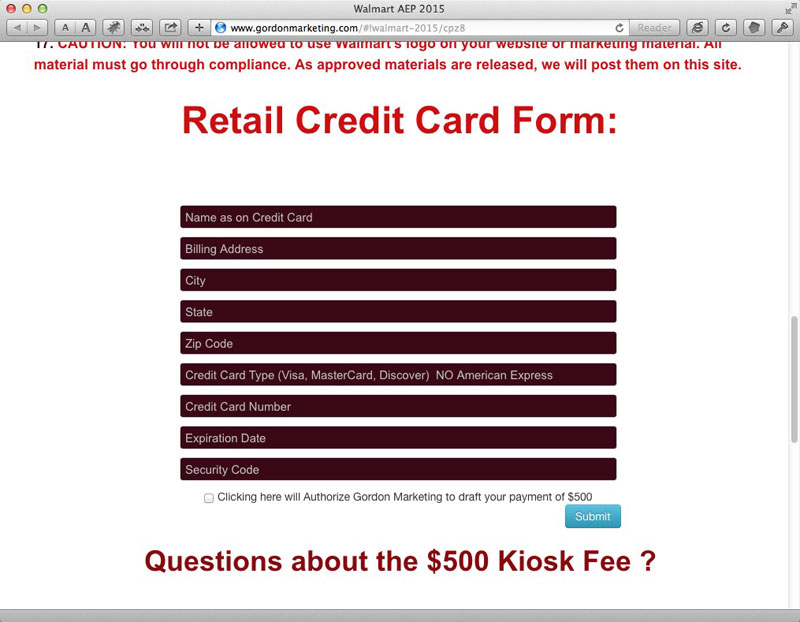 Do you see it? Or, rather, do you not see what I'm talking about?

That's right: There's no SSL Certificate on the website. No "https://", no "padlock icon" anywhere.

This marketing website is asking for insurance agents to make their $500 kiosk fee by entering credit card data on an insecure website...and it then expects these same agents to enter other people's sensitive information, including social security numbers/etc, into the GoHealthInsurance.com and/or Healthcare.gov/other state exchange websites.

To clarify: I'm not saying that Wal-Mart, DirectHealth.com, GoHealthInsurance.com or this GordonMarketing.com website are necessarily doing anything illegal or even ethically wrong (although the credit card companies should be having a conniption over the SSL issue, as should any broker thinking of entering their credit card info onto that form). I'm just saying that every additional detail which comes forth about this deal makes it less and less of a positive in my view.

UPDATE x3: Thanks to various folks for pointing me towards Sarah Kliff's take over at Vox re. WM killing insurance for their part-time workers. Bottom line: As I (and others in the comments) have noted, this could be a good thing for those employees in the end...just not the U.S. taxpayer (oh, and apparently it's only 26,000 employees, not 30,000):

But for low-wage workers, Obamacare has introduced a new and big drawback to the employer insurance. Namely, anybody who gets access to affordable coverage at work is barred from getting subsidies through the new exchanges. This is even true for people who don't buy insurance at work; just the act of getting offered employer coverage blocks individuals from using getting financial help.

That financial help can be a big deal for those with lower incomes.

...If Walmart doesn't offer her insurance...With that financial help [via the ACA exchange], she can buy insurance for as little as an $7 per month. As a low-wage worker, she gets some of the most generous financial help.

But if Walmart does offer her coverage, it becomes her only option. She doesn't qualify for federal help and the $7 plan disappears. Walmart's plan, meanwhile, is way more expensive. The average premium there works out to $111 per month.