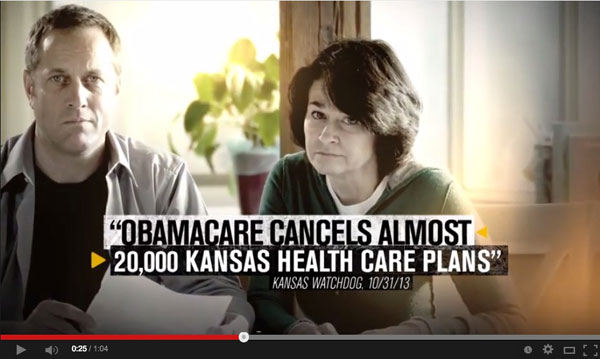 So, given the GOP's propensity for, um, exaggerating the "OMG!! 5 GAZILLION POLICIES CANCELLED!!!" claims from last year, I decided to check into it. Here's the original source:

OSAWATOMIE, Kan. — As a result of Obamacare, nearly 19,500 Kansas health care plans will be canceled in the coming months, forcing individuals to purchase an Affordable Care Act-compliant plan either privately or on the federal insurance exchange.

The larger problem is that, of course, in response to the backlash over the "If you like your plan you can keep it" debacle, President Obama and the HHS Dept. issued a new "grandfathering" policy only a week or so later, allowing the state to let insurance companies extend existing non-ACA compliant policies by up to one year if they wanted to...and then, a few months later, basically said "screw it" and bumped that extension out to up to 3 years.

Some states took him up on this offer, others didn't...and even among the states which did, some insurance companies granted the extensions while others didn't (and some only went 1 year, others 2 or 3).

I don't know the status of the other 10,000 referred to (which came from BCBS Kansas City, which is apparently separate from BCBSKS itself and only serves 2 counties).

Supposedly Aetna/Coventry and some smaller providers may have originally been planning on cancelling a bunch of plans as well...except that according to this article, Coventry never got around to doing so in the first place:

Coventry Health Care of Kansas, the state’s second largest insurer, doesn’t face the same challenge as BCBS because it made a business decision to hold off cancelling policies that came up for renewal before the end of the year, Praeger said.

That pretty much leaves BCBS KC and the other 10K. Based on the evidence at hand, my guess is that they likely reversed their cancellation decision as well...and if they did, that means that the actual number of Kansans who lost their healthcare policy in 2013 due to ACA noncompliance may have actually been as little as...ZERO.

UPDATE: It occurs to me that it's still technically conceivable that up to 20K Kansas residents could have had their policies cancelled, since it's a little fuzzy as to whether the numbers here refer to people or households. If the remaining 10K are households and if all/most of them really were cancelled, then yeah, in that situation I suppose it could be 20K people in all. Will follow up if I'm able to hunt down the relevant info from BCBS KC.