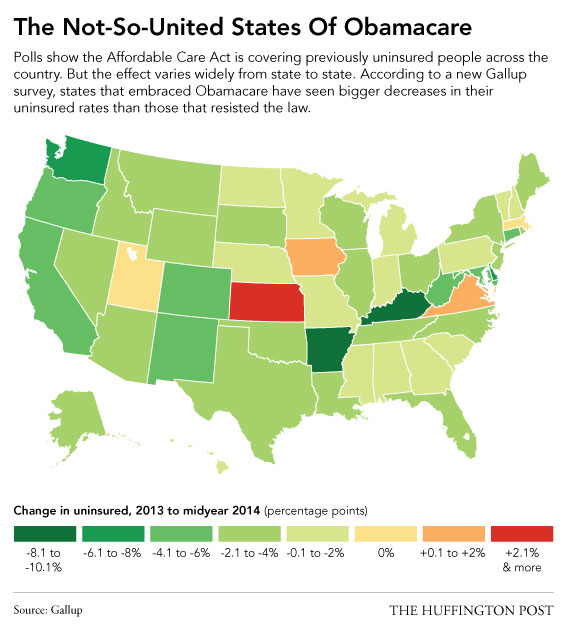 Kansas is, of course, a red state run by an extremely right-wing Governor (Sam Brownback). Ironically, even though the prior job of (now former) HHS Secretary Kathleen Sebelius happened to be...Governor of Kansas, the state refused to expand Medicaid or implement their own ACA exchange, like most of the GOP-controlled states.

It is therefore unsurprising that they wouldn't see much of a reduction in their uninsured rates due to the ACA. What is surprising is that, according to the Gallup survey, Kansas has somehow managed to increase the number of uninsured residents by a whopping 5.1% points.

It's important to bear in mind that this is 5.1% points, not just an increase of 5.1% over the existing number--that is, the actual number of uninsured, according to Gallup, went up from 12.5% to 17.6%...a 41% increase, which is astonishing...and makes absolutely no sense whatsoever.

Consider this: Kansas’ total population is around 2.89 million people.

KFF.org estimated Kansas’ total uninsured population at 369K last fall, or 12.7%…which is very close to Gallup’s pre-ACA exchange estimate of 12.5%…so that seems to check out. That's either 361K - 369K; let's split the difference and call it 365,000 uninsured to start with.

KFF also estimates around 37K of the original 365K are undocumented immigrants, and another 78K who are caught in the Medicaid gap. That’s 4% of the total right there.

Of the remaining 250,000 uninsured, they have 58K who were still eligible for Medicaid or CHIP (potential woodworkers) and another 196K who were eligible for exchange subsidies via HC.gov (um, depending on the outcome of the Halbig case, of course).

As of 4/19, Kansas had 57K enroll in QHPs, of which at least 87% had paid up (and that’s even using the GOP’s own BS House Commerce report from back in May)…so that’s a minimum of 50K exchange QHPs paid for.

As of the end of May, CMS had 66.7K people enroll via standard methods and 14K enroll via the HC.gov exchange, or about 80.6K total.

So, again, that’s a total of 130K people who enrolled in either QHPs or Medicaid.

Even if we assume that there wasn’t a single Woodworker out of those 80,000 Medicaid enrollees (that is, all 80K were either renewals or only became Medicaid-eligible since January 1st due to a change in personal circumstances), and even if only half of the exchange QHPs were previously uninsured (vs. KFF's national estimate of 57%), that’s still 25,000 people...and that doesn't even include those who enrolled off of the exchange, which I have to imagine was at least a few thousand.

How on earth can this be possible?

Yes, there are 2 other states (Iowa and Virginia) which also show a net increase in uninsured, but the changes in each are much smaller: Only 0.6 percent points in Iowa (a 6.2% increase) and 0.1 points in Virginia (less than a 1% increase). Two other states, Massachusetts and Utah, showed no change at all (although Massachusetts already had the lowest uninsured rate in the country to begin with...thanks, in large part, to the predecessor of the ACA, RomneyCare, of course).

Kansas' 5.1 percent point increase--41% over the prior 12.5%--is simply unfathomable to me unless there's some unique factor which impacts Kansas alone.

Now, ACA opponents have made a lot of fuss about "OMG!! 5MM CANCELLED!!", except that a) that number was vastly overstated, and b) Glenn Kessler, the Washington Post's FactCheck guy, looked into it for Kansas specifically and found that:

...few plans were canceled in Kansas despite initial reports that thousands of plans might be terminated.

For instance, Blue Cross Blue Shield, the largest carrier in Kansas, initially sent 10,000 letters of cancellation but then withdrew them after the Obama administration offered a fix that would allow people to keep noncompliant plans, according to Linda J. Sheppard, director of health care policy and analysis at the Kansas Insurance Department. Other companies also allowed customers to keep their plans, and the stateannounced in March that the extension would continue until 2016.

“Bottom line, at this point we believe the number of plans that were actually canceled or non-renewed is low,” Sheppard said.

I looked up their actual market share, and it appears to have been 47% as of a year ago. Obviously this could have changed over the past year (ACA exchange market share hasn't matched up with pre-ACA market share in some states), but if BCBSK made up half of the existing market in the state and they only sent out 10K cancellation notices, that strongly suggests that the other players in the state combined would only have sent out a similar number...and those 10K were withdrawn anyway, so it's conceivable that virtually no one in Kansas lost their insurance due to the ACA. So...scratch the "cancelled due to Obamacare" theory.

The only thing I can think of would be if there’s been a massive loss of employer-based insurance. It’s my understanding that Gov. Brownback instituted massive tax cuts which have been a disaster for the state economy…but it’s also my understanding that Kansas’ unemployment rate has gone down somewhat over the past year.

Is it possible that they’ve done so at the expense of ESIs? That is, a large swapout of jobs w/benefits for a larger number of jobs without them??

Have there been any other significant changes in Kansas’ demographics over the past year? Large numbers of people moving in (or out) of the state?

Even politically/ideologically, it makes no sense. Look at the map again and consider the 4 states surrounding Kansas: Missouri, Colorado, Nebraska & Oklahoma.

Yes, Colorado is a blue state w/both Medicaid expansion and their own exchange…but the other 3 are all red states, and all 3 of them saw at least a small drop (and in Oklahoma, the most Kansas-like demographically, I’d imagine, it dropped 3.9 points).

Oklahomans presumably despise President Obama and the ACA as much, if not more than Kansans...yet their uninsured rate dropped by over 18% (from 21.4% to 17.5%) while Kansas, right next door and with similar demographics (I think) went up by 41%?

This leads me back to the Glenn Kessler piece. Back in May, after Kansas Rep. Tim Huelskamp made his claim that there were more uninsured Kansans post-ACA than pre-ACA, Kessler, the Columbia Journalism Review (who interviewed me for their piece) and myself all came to the same conclusion (my quote below):

Well, if the current Gallup survey is accurate, it appears that all three of us owe Rep. Huelskamp an apology.

I just can't figure out how this could be the case.

UPDATE: It looks like I'm not the only one who finds the Kansas number to be more than a little hard to swallow (thanks to Esther F. for the links):

But Kansas Insurance Commissioner Sandy Praeger said the number “appears to be an anomaly that needs more review. To have the uninsured jump that much in one year would be unprecedented.”

The uninsured numbers in Kansas have hovered around 12 to 13 percent for many years, Praeger said, adding, “We will try to find out where the discrepancy is.”

In deeply red Kansas, the uninsured rate actually went up by 5 percentage points this year. [Research director Dan] Witters said Gallup is taking a closer look at that finding, and it's not clear if it represents an anomaly.

One [possible explanation], [Praeger] said, is that the state’s own estimate of a 12 percent uninsured rate was off the mark because, before Obamacare kicked in, uninsured people inaccurately reported being insured.