Taking a little break from the Halbig nonsense to get back to the core purpose of this website...

The Graph is starting to get pretty unwieldy at this point. The scale has been changed from Weekly to Monthly, and things are getting pretty squished horizontally with the addition of August to the right side. The overall range remains somewhere between 23 - 28 million, with the main increases being on the QHP side and minor tweaks (some up, some down) in the Medicaid, SHOP & other areas.

The only other notable change is that I've removed the "depending on payment status" qualifier, since I've already removed the 10% of exchange QHPs who definitely aren't paying up for a variety of reasons.

In any event, assuming my estimate of roughly 9,000 total exchange QHPs per day (whether paid or not) during the off-season holds true, we should hit the 9 Million milestone around a week from now, on or around August 8th...although obviously if I've underestimated the rate, we could have already hit 9M, and if I've overestimated, it might not cross that line until later in August.

However, my best guess is that it'll hit the 9M mark sometime between August 5th and August 15th.

It'll be interesting to see whether the HHS Dept. issues any sort of press release around that time, given that they've inexplicably decided not to continue their monthly enrollment reports during the off-season.

I should also note that the number of paid exchange QHPs should hit 8 million by the end of August as well.

UPDATE: Well, today's August 8th. By my best reckoning, we should be in the vicinity of 9 million total even as I type this.

UPDATE x2: Well, it's now August 15th. The latest numbers out of Massachusetts (they've remained "stuck" at around 34K, only adding a few hundred QHPs since early May as they overhaul their exchange website) have caused my overall projection range to drop several hundred per day, but it's still ranging somewhere between 8K - 11K/day. Assuming this is accurate, we should still either have already hit the 9 million mark or should be about to do so any day now.

Will the HHS Dept. issue a big, splashy press release to mark the occasion? Perhaps not; they may be waiting for the paid number to cross the eight million milestone, which by my estimates should happen sometime around Labor Day weekend. Of course, that would be kind of awkward since they were already touting the 8M number back in April; it'd be awkward to explain why 8M wasn't "truly" reached until almost 5 months later. 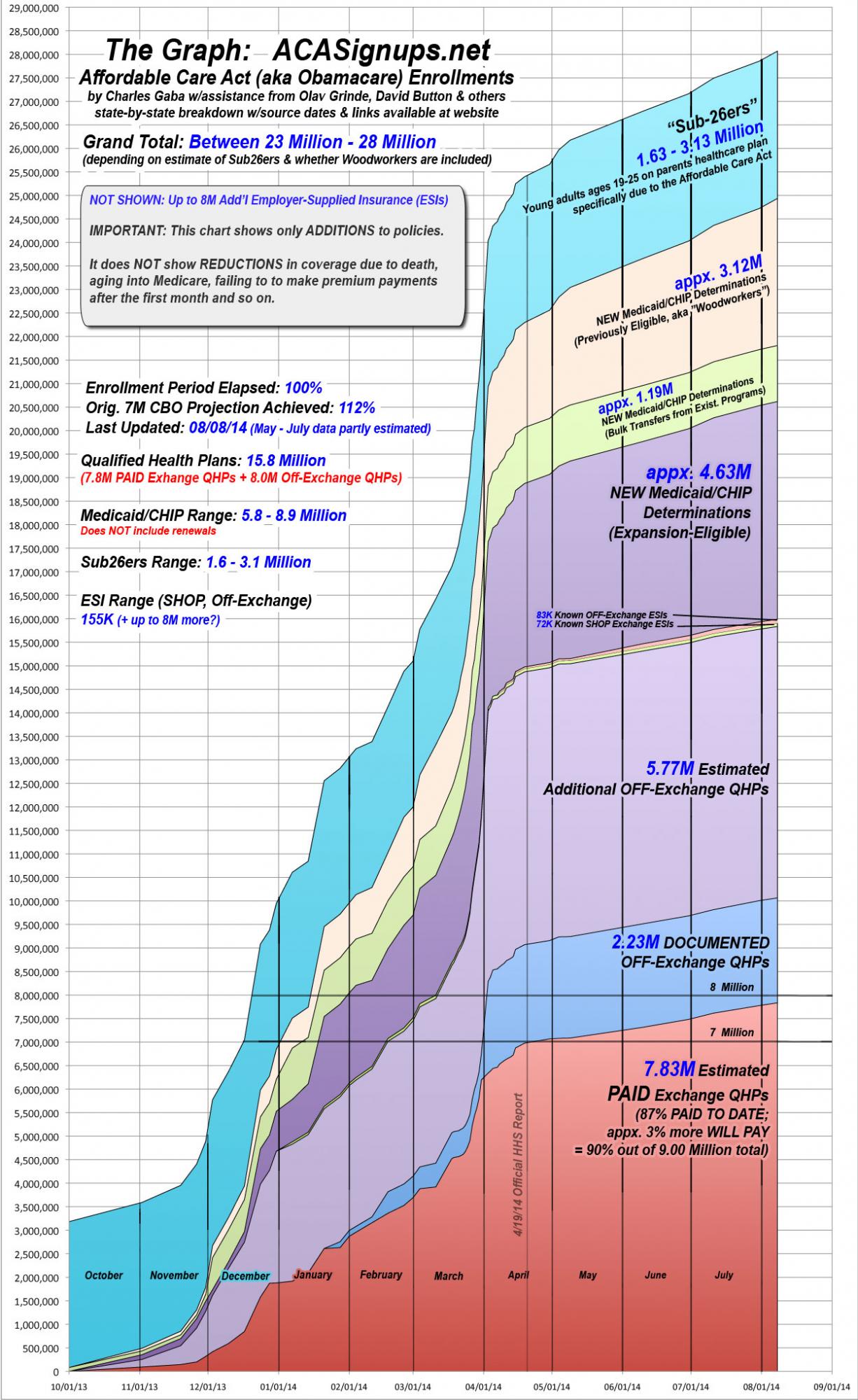