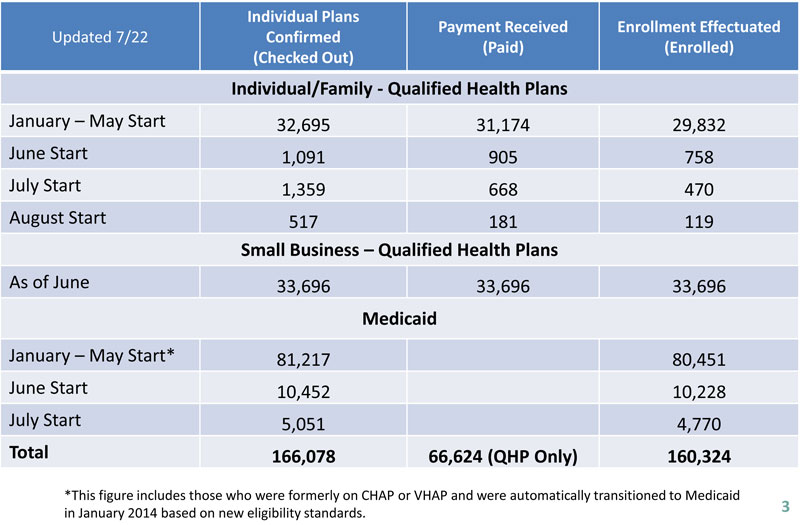 Secondly, while the total number of enrollees currently on the books has actually dropped since 4/19 (from 38,048 down to 35,662), that appears to be a combination of purging of duplicate entries and/or people who dropped their coverage after the first month, since the paid enrollee figure has gone up substantially, from 27.2K as of April 30 to 33K as of July 22, for an overall payment rate of as high as 92%...or, in a worst-case scenario, as low as 87% if you divide it into the HHS Dept's. official 4/19 number of 38,048.

Again, right around 90% if you split the difference. In any event, VT's paid QHP total has gone up by 5,800 since the end of April.

Finally, Medicaid expansion enrollment is a bit confusing because the 166,078 number above includes everyone on Medicaid/CHIP in Vermont. According to the Kaiser Family Foundation (p. 13), Vermont's total Medicaid/CHIP enrollment as of June 2012 was around 142,000 people, including the 33.5K in their VHAP/etc. who were also transferred over to Medicaid "proper" due to the ACA expansion provision. Since the grand total is now 166K (also including those transferees), the breakdown appears to be roughly: