A week or so ago, I posted an entry about the requested rate changes for 2015 from the insurance companies operating on the New York exchange (I'm emphasizing "requested" since, again, those changes still have to be approved by state regulators, who have already lopped the average increases down dramatically in both Rhode Island and Connecticut, and I just announced that CA kept them to a quite reasonable 4.3% (weighted) average). The overall unweighted average requested change in New York appeared to be 14.6% increase, which isn't good news at all.

Thanks to contributor Bob H., however, for not only crunching the numbers to give the properly weighted average increase, but also for noting that it turns out that the number of companies listed in the original report (a whopping 42 of them) is slightly overstated, to put it mildly. You see, it turns out that, according to Bob...

Don't get me wrong, rate increases for those offering Group and Medicare are important as well, but that's not what everyone is wringing their hands over at the moment. SHOP enrollments have been literally a rounding error on the ACA exchanges to date (only covering around 72,000 people nationally to date, to my knowledge), so those aren't really relevant here; and Medicare is a whole other kettle of fish.

So, we've lopped half of the companies out of the mix already.

Good point, and I don't know the answer to that either. Of the 21 actually selling on the individual market, 2 of them are listed as "NPA". As he notes, if these companies are still on the exchanges but are keeping their rates the same, then you have to divide by 21; if they're dropping out of the exchanges completely, you have to divide by 19, which would nudge the average up a bit.

Once you take these factors into account, that scary-looking "14.6% increase!!" drops down to just 7.7% (or just 7% even if both Atlantis and Group Health Inc. are included and kept their rates the same).

Finally, Bob hits on the other major flaw in simply lumping together all of the plans and drawing out an average:

Exactly. As I noted in my Michigan weighted average breakdown:

Even when properly weighted, we have no idea what these increase or decrease requests are from. That is, let's say that BCBSM's average premium was $500/month while Molina's was $1,000/month to start with. BCBSM raising their rates by 9.7% (up to $548.50) would still come in less expensive than Molina reducing their rate by 21.6% (down to $784), so this still doesn't tell us everything. 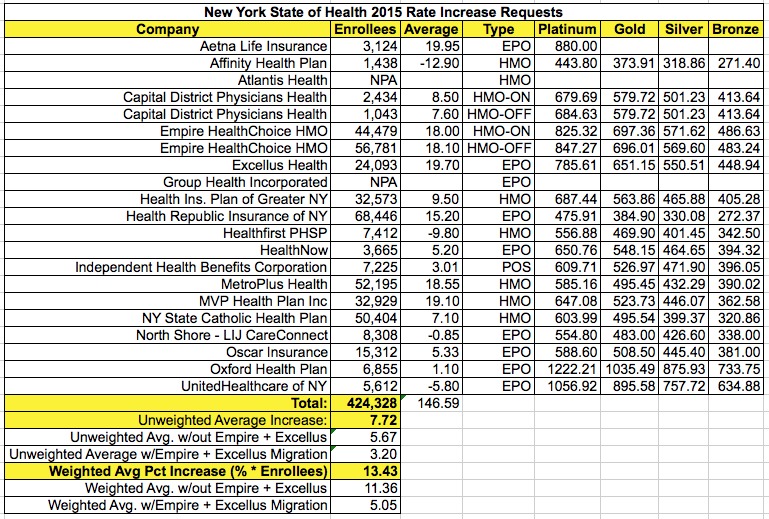