So, how about MY family's healthcare costs before & after the ACA exchanges?

In my previous entry, I added a comparison of my own families' old & new policy costs as an addition at the bottom of the article. However, I decided to move it to a new one for two reasons: First, after discussing the provisions of both policies with my wife some more, it turns out I was wrong about a few things; secondly, I've had quite a few people asking about my own experience (especially given my recent shingles outbreak), so I figured it was worthy of a separate entry.

As I've noted many times before, we were among those who received the "OMG!! SCARY!! 5MM POLICIES CANCELLED!!" notices (as an aside, this number appears to actually only have been 1-2 million at most) from our insurance company, Blue Cross Blue Shield of Michigan. Our old policy ran around $800/month for my wife, son and myself (which, by the way, was had already nearl doubled from around $440/month just 3 years earlier). The old policy had no deductible (yay!), and the first 2 regular office visits were covered at 80% (yay!)...but after that, all visits were full price, for both our GP ($90/visit) as well as specialists (about $190/each). There were zero mental health services covered; most other stuff was 70%, including (most) prescription drugs.

So, we went on HC.gov and enrolled in the closest equivalent policy, also from BCBSM. We probably should have shopped around for other companies, but wanted to keep things simple (we had auto-pay set up at BCBSM already), and BCBSM is pretty much accepted by everyone in Michigan, so we didn't want to worry about being out of network, etc etc. It has a $300 deductible. It's a Gold plan, so that's 80% coverage on most other stuff. We qualified for a small subsidy of around $23/mo off of the $993/mo premium. Annual physicals are covered 100%. GP visits are a flat $30 co-pay; specialists are $50.

So, here we go. First, just the actual premiums:

Ouch. Not off to a very good start--even with the subsidy, we're looking at a 21% premium increase (although again, this is still less than the 82% spike that BCBSM dumped on us over the prior 3 year period).

Next, let's add in 2 normal office visits for each of us per year; we each had a physical early in 2014, and each of us has been in at least once more for one reason or another already since then (more on my shingles situation later). These are 80% covered by the old policy ($18/each). On the new policy, the physicals are covered 100%, and there's a $30 co-pay the second one...except that there's also the $300 deductible which goes towards the full visit prices of $90 until used up:

Now here's where things start to get interesting: As regular readers know, I came down with a nasty case of shingles around April 17, right after the close of the open enrollment extension period. I've had to visit our family physician 3 times (with a 4th coming up). The shingles got into my right eye, so I've had to visit an opthamologist 3 times as well, and I also had to visit an ENT twice for an unrelated sinus/ear infection situation. All of these were full price before, but have flat co-pays now (after the rest of the deductible is used up). This helps reverse the costs somewhat: 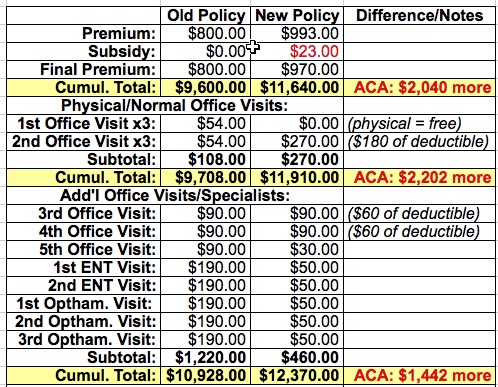 Of course, the shingles diagnosis resulted in a whole mess of prescriptions--Vicodin for the pain, Ceftin as an antibiotic and Valtrex for the shingles itself. In addition, I came down with an ongoing case of Post Therapic Neuralgia since the actual shingles cleared up, so they put me on Neurontin. It varies depending on the medication, but basically they were covered at around 70% before, 80% now...except for the birth control pills, which went from $30/mo down to free. The prices listed below are estimates as I don't have the receipts on me: 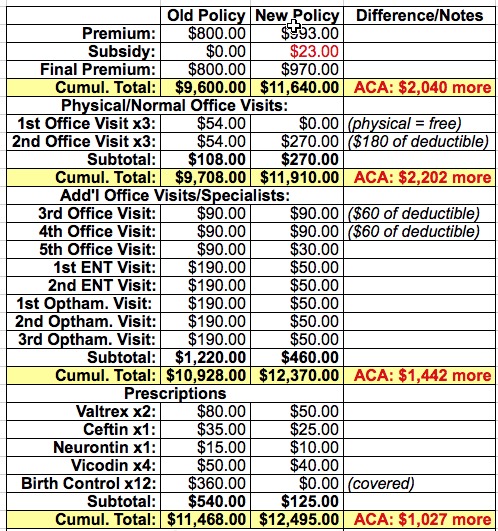 We're back down to a difference of only $1,027, or a 9% increase. Considering that premiums alone were growing at around 10% per year on average before the ACA went into effect, this is right in line with that.

This factor cannot be repeated enough: Even assuming the ACA had never been passed, our premiums for the old policy would almost certainly have gone up by around $1,000 per year anyway...meaning that the table above would have ended up being a wash.

However, there's one more major factor for us: Mental health coverage. One of us (not saying who) has some issues (not saying what) which require a therapist (not saying why). This was not covered at all under the old plan; under the ACA, coverage is mandatory, at the same rate as other treatments. We had been paying through the nose for the therapist last year: $145 per session, and while weekly sessions were recommended, we could only pull them off twice a month. This is now lopped down 80% to just $30, so we've upped the sessions to the recommended weekly ones. We're certainly hoping that they won't be necessary for more than a year: 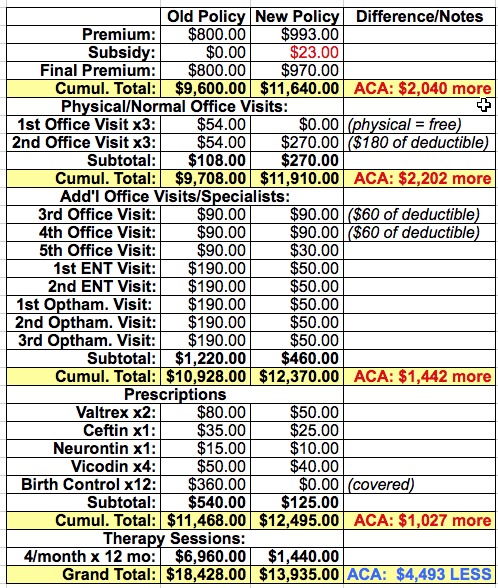 Blammo. With that final addition, the tables have completely turned; the new ACA-compliant policy now saves us almost $4,500 for the year (or $5,500 if you assume that the old plan would have gone up about 10% without the ACA).

Now, obviously this may not be the case in the future (assuming that therapy isn't needed any longer)...but at the same time, we're only halfway through the year. Who the hell knows what other injuries or ailments may show up over the next 6 months? The bulk of the ACA policy costs are already behind us, so any additional expenses will only shift the advantage towards the new policy even more.

This will certainly vary by family, by state, by policy and even by year. Maybe next year we'll all be perfectly healthy and injury-free, in which case yes, the old policy would have cost us less...but at the same time, that's also true if we didn't have any insurance at all. The whole point of insurance is what if you do become sick or get injured; how well will you be covered and what will the cost be then?

Overall, assuming therapy isn't needed long term and an average of, say, one moderately-serious injury or illness per year among the three of us, my guess is that it'll end up being a wash for us. Your mileage may vary.