So, yesterday I posted an item about how the ACA has cut Kentucky's uninsured rate by at least 50% since last October. This is significant news, but I also posted similar items about impressive uninsured rate drops in New Jersey (38%), Minnesota (40%) and especially Massachusetts (a good 86% or so, down to nearly zilch). All four posts received various levels of retweets on Twitter. However, the Kentucky one in particular apparently caught the eye of one David Simas, aka the "Assistant to the President and Deputy Senior Advisor for Communications and Strategy."

Not only did Mr. Simas tweet a link to the Kentucky entry, but the official White House twitter account retweeted it to nearly 5 million followers as well. To the best of my knowledge, both of these are firsts for me, so I admit to being a bit geeked.

However, this also presents an interesting question: Out of the 4 states with impressive drops in their uninsured rates which I posted about, why did the White House choose to highlight Kentucky in particular?

It's rather amusing to see him lie through both of the forked tongues on each of his two faces, since accomplishing the above even theoretically would require at least a $500 million tax increase on the people of Kentucky (actually more like $650 million if you include the subsidies for Kynect QHP enrollees). It's all a load of crap, of course, since McConnell a) knows the ACA won't be repealed and b) would have zero intent of keeping Kynect even if it somehow was.

Still, this seems like a good time to remind people of my Great Conservative Kynect Challenge:

Here's my challenge to you, Conservative Pundits: Will you tell your readers at Forbes, HotAir, the Daily Caller, NewsMax and (dare I say it) FOX News the truth? Will you state point-blank with no equivocation that Kynect, Obamacare and the Affordable Care Act are all the same Goddamned law?

So far I've heard nothing but crickets from anti-ACA forces. Somehow I don't expect this to change.

Oh, as an aside, the retweet by the White House inspired me to check the site analytics for ACASignups.net. It turns out that someone in the Oval Office has visited this site fairly frequently over the past 3 months: 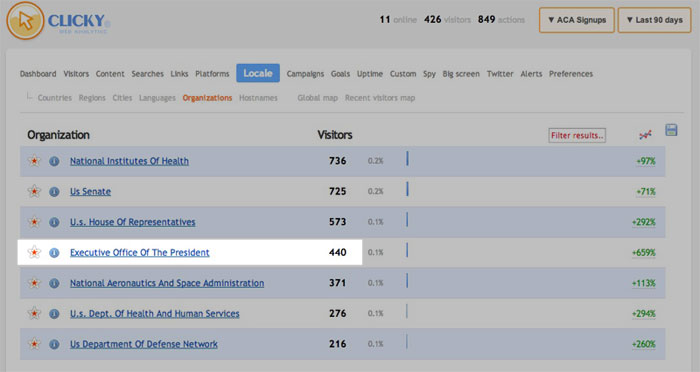 That being the case, let me just say Hello, Mr. President! :)

Pop Quiz: How many people do you think have clicked the link in the Tweet to read the actual linked source article itself since it was posted by both Simas & the White House? You know, so they can read the source for this impressive-sounding claim?

Answer: Fewer than 700 as of this writing.

Just remember that in case I ever make a typo...