I may have had some issues with Avalere Health's methodology in the past, but they're pretty well respected in the industry, and they've certainly brought up legitimate issues with my own methodology as well (they're the ones who pointed out that the early version of my Medicaid/CHIP estimates was mixing "baseline churn" into the mix, which has since been corrected).

Anyway, they're out with an interesting new study which estimates that there of those newly-added to the Medicaid/CHIP roles, roughly 550,000 of them--specifically in the 24 NON-expansion states--rightly belong in the "woodworker" category: People who already qualified for Medicaid under the pre-ACA rules, but who didn't enroll until after October 1, 2013 for any number of reasons (not knowing they qualified, not knowing how to apply, being embarrassed about doing so, etc). Since the ACA exchanges also included a massive education/outreach effort (some of which even spilled over into the states which didn't expand the Medicaid program), and since the application process was streamlined in many states as part of the law, these folks who "came out of the woodwork" to enroll in Medicaid are rightly considered part of the success of the ACA specifically.

In any event, I've taken a look at Avalere's study; they basically just did a simple quarter-over-quarter comparison between the July - Sept. 2013 quarter and the Jan - March 2014 quarter:

The analysis reviewed 26 states that had not expanded Medicaid as of March 2014: AK, AL, FL, GA, ID, IN, KS, LA, ME, MI, MO, MS, MT, NC, NE, NH, OK, PA, SC, SD, TN, TX, UT, VA, WI, WY. Nine non-expansion states were excluded from the analysis: Seven states (AL, AK, LA, MO, NE, WI, and WY) that reported decreases in enrollment; ME due to incomplete data; and FL due to lack of consistent inclusion of CHIP lives. Three states with planned Medicaid expansions were included in this analysis, as they had not expanded by the end of March 2014: MI’s expansion began in April, NH’s will begin in July, and PA plans to expand in 2015.

It's not perfect, of course; they didn't include Maine or Florida due to incomplete/inconsistent data, and there were 7 states which showed a net loss of Medicaid enrollees. However, this is useful for comparing with my own estimates to see how much they differ. The most important distinction is that my own data includes Medicaid/CHIP determinations, while Avalere's appears to only include actual enrollments. The enrollment number will obviously always be somewhat lower than the number determined eligible for Medicaid/CHIP, although I'm not sure what the percentage gap between the two typically is.

In any event, here's the "woodworker" tally in the 17 remaining states and how they compare to my own numbers: 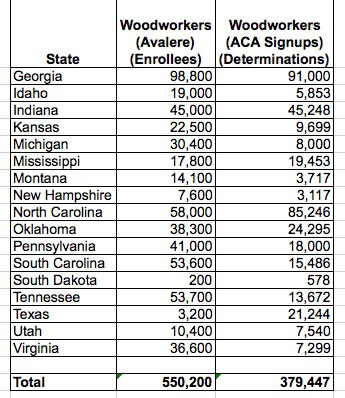 Hmmmm...well, this isn't particularly helpful, really. I was expecting my own numbers to come out higher than Avalere's, since I include determinations (not all of which would actually be enrolled yet), and in some states my number is indeed higher...but in others it's actually far lower than Avalere's, and as you can see, when you add all 17 states up my total comes in at only around 380,000 determinations. If you add in the 7 missing states (the ones that Avalere says had a reduction in Medicaid enrollment), my own tally goes up an additional 87,000 to roughly 466,000 (I have no idea how much Avalere believes the Medicaid tally has to be reduced in those same 7 states, but my ego hopes that it's around 84,000, which would make their number and mine identical).

So, what does this tell us? Well, at the very least, this should certainly be proof that I'm not trying to "pad the numbers" by beefing up the Woodworker figures, as some have charged. I was expecting Avalere's total to come in around 30% below mine; instead it's the other way around (380K/550K = about 70%).

In any event, this at least gives me confidence that my total woodworker Medicaid number (around 2.2 million determinations nationally, including the expansion states) is in the right ballpark. Assuming around an 30% enrollment rate, that would mean around 1.54M actually enrolleed via the "woodworker" effect.