Not much for me to add to this, really, other than to say that THIS is the correct answer to the "But...but how many were ALREADY INSURED???" complaints:

WASHINGTON, D.C. -- The uninsured rate for U.S. adults in April was 13.4%, down from 15.0% in March. This is the lowest monthly uninsured rate recorded since Gallup and Healthways began tracking it in January 2008, besting the previous low of 13.9% in September of that year.

The uninsured rate peaked at 18.0% in the third quarter of 2013, but has consistently declined since then. This downward trend in the uninsured rate coincided with the health insurance marketplace exchanges opening in October 2013, and accelerated as the March 31 deadline to purchase health insurance coverage approached -- and passed -- for most uninsured Americans. The Obama administration decided in late March to extend the deadline to April 15 for those who had already begun the enrollment process.

The uninsured rates for the first quarter of 2014 and the month of March are averages for the entire quarter and month, and do not necessarily reflect the uninsured rate for the day of the March 31 deadline. The April estimate better captures the impact of late sign-ups since all interviewing occurred after that critical date.

These data are based on more than 14,700 interviews with Americans from April 1-30, 2014, as part of the Gallup-Healthways Well-Being Index. 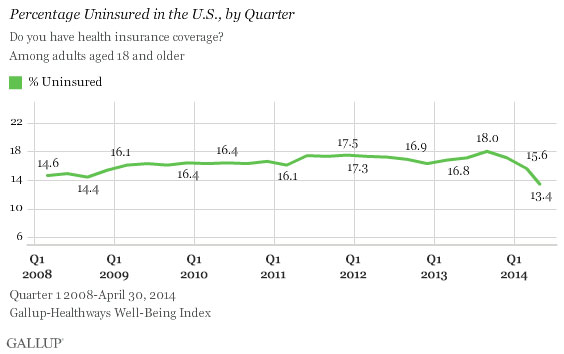 Now, Gallup only deals in percentages, not absolute numbers, and the estimates of the number of uninsured adults varies depending on the source (plus, some include undocumented immigrants while others don't, etc.), so I'm not sure how accurate my own calculations are, but I think what we're talking about here is:

However, the fact remains that the total number of uninsured individuals in the US has been cut by over 25% in just the first 7 months of the ACA exchanges and new Medicaid expansion rules (and could have potentially been cut by up to 4.8 million more if the other half of the states would expand Medicaid as well).

This 11 million reduction is even more impressive when you consider that after you subtract uninsured undocumented immigrants as well as the 4.8M caught in the Medicaid Gap, you're left with a potential uninsured pool of only around 36.4 million who actually qualify for either exchange QHPs or Medicaid via expansion. By that measure, this potential pool has been reduced by over 30%.