A trip down memory lane (meta)

I posted a pre-emptive "Thank You" post a couple of weeks ago, since I probably won't have time to do so during this frenzied weekend. However, I did want to link to it again.

Everything I said then is true now, only more so. I appreciate everyone who has helped me out with this project, including the regular site visitors.

Also, just for the hell of it, here's a little snapshot of the site traffic since the begining of the year (I don't have stats from last fall, as I didn't convert the site over from a simple spreadsheet to a true website until the end of December): 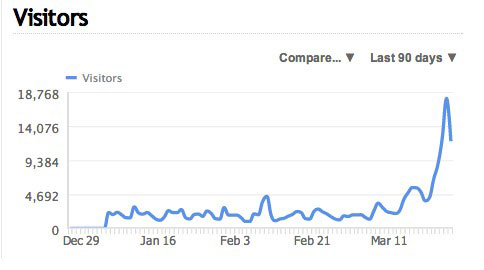 As you can see, the first mini-spike happened on Feb. 12, when the January numbers came in and I was absurdly dead-on with my exchange QHP projection. The huge spike at the end culminated yesterday with Paul Krugman's kind words, and traffic peaked at around 17,900 unique visitors.

I'm guessing Monday and Tuesday will be fairly busy as well as April 15 and 16...

As long as I'm doing a bit of "meta" navel gazing as we head into the (not quite) final weekend, here's my diary from Daily Kos last October 11 which eventually led to my launching ACASignups.net in the first place.

(Note that At that time I, like so many others, was confused about the distinction between applying and actually enrolling, thus leading to my completely wrong conclusion that 84,000 people had enrolled as of 10/11 when most of them had only applied by that point).

Here's the passage where ACASignups.net was born: (pardon the NSFW language...I'm a bit cruder over there at times...)

Seriously, though, HHS should really start releasing the official (accurate) numbers of actual signups for all 50 states (or at the very least, the 36 states that they're responsible for) on a daily--or at least, weekly--basis. I don't care if it's a pitifully small number. 100,000? 10,000? 100? 10? Even if it's in single digits, release the damned numbers. Be upfront about it. Everyone knows by now how f*cked up the website is, so be honest and just give out the accurate numbers as they come in.

Finally, here's the actual announcement of the launch of this site 2 days later (originally called "ObamacareSignups.net"...I changed the name because it was less wordy, not because I think "Obamacare" has a negative connotation):

OK, given that the HHS Dept. is not releasing any actual, official ACA/Obamacare signup numbers until a month has passed, I've decided to launch a simple website devoted to tracking the numbers as they're reported by the states running their own exchanges, as well as otherreputable sources.