Contributor deaconblues brings a very nice find. Massachusetts continues to be one hell of a mess, but this latest official briefing helps bring some clarity to the situation, while raising some more questions. Rather than restate it all myself, here's deaconblues summary, and the chart in question:

The Medical Security Plan is/was a Mass plan to help people on unemployment benefits to get insurance. It's being absorbed into the ACA. The comments say "now in Commonwealth Care", but they are separate numbers, and part of the 410K total 3/14 enrollment.

Page 11 of the briefing also says the Small Business Platform has 1,056 enrollees. I didn't even know Mass had a working SHOP program.

Page 10 shows the Fast Track program sent out 22K invoices on 3/8. As of 3/13, 720 people had enrolled (the number we currently show). If the number sounds low, that's only 5 days for the invoices to be delivered, a check sent, the check received by the insurance provider, then notification provided to the Health Connector. The next update should show more representative numbers.

The end result of all of this is that MA's Medicaid total changes from 151K total (130K Bulk Transfers, 15K est. Strict Expansion, 6K est. Woodworkers) to 300K total (107K Bulk Transfers, 64K MassHealth, 129K Other New Medicaid). I'm assuming that the 64K is Woodworkers and the 129K are Expansion for the moment, but could be wrong about this.

On the private QHP side, I'm going ahead and adding the 1,056 enrollees to SHOP, but I'm ignoring the 227K "Limbo Status" for now, as I explained last night; I added them to the graph/spreadsheet briefly but have backed them out again for now. In fact, the SHOP number refers to 1,056 members, which may mean "employees", which means I should probably multily this by my standard 1.8x for "households" to include family members...but given how confusing MA is, I'm holding off on that; it'd only be about 800 more people anyway. 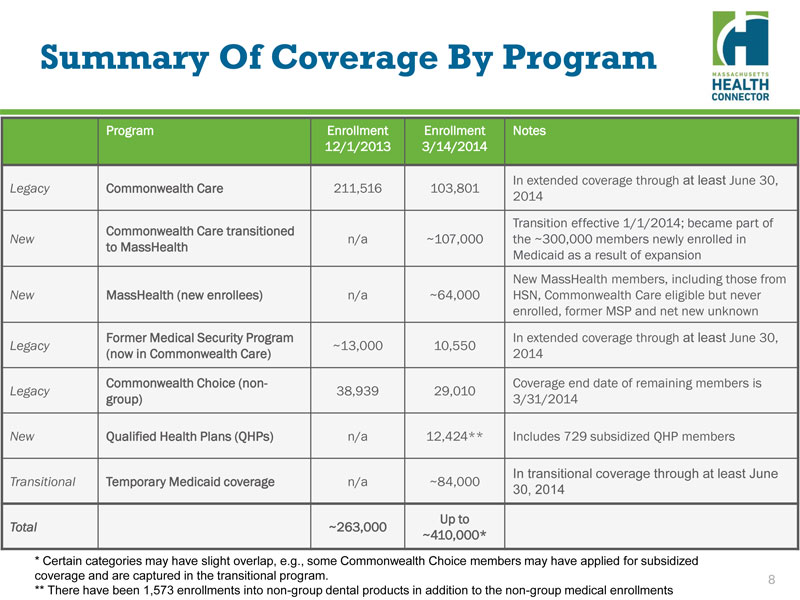