UPDATE 3/27/14: Connecticut announced yesterday that they've purged their 5,000 unpaid enrollments to date...out of 72,551 total...or less than 7% unpaid. Assuming the cleaned-up number is the one reported to HHS for March, they join MA & WA as having 100% paid enrollments:

UPDATE 3/28/14: Oregon appears to be doing the same thing as Connecticut, "purging" their unpaid enrollments as well. 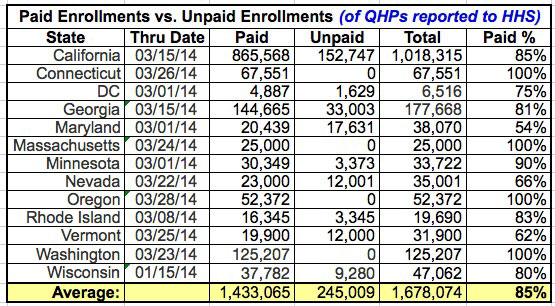 The following is from an article about California's exchange from March 9th:

While the article above only refers to enrollments through January 31st, a follow-up press release from CoveredCA itself on March 13 states that 85% of all enrollees (through March 9th) have paid up:

...Lee said insurance companies are reporting that 85 percent of all enrollees have paid their first month’s premium.

UPDATE: Moving ahead to the March 19th update after California reached the 1 million enrollment mark, Peter Lee reiterated that the 85% paid figured continues to hold:

The number of people who have picked a Covered California health insurance plan now tops 1 million. This is an amazing accomplishment, and it means that with two weeks to go we have exceeded the highest “enhanced forecast” for the entire open-enrollment period. The health insurance companies report that more than 85 percent of those who have enrolled are paying their premium and getting coverage. That means 850,000 Californians are on their way to coverage through Covered California, which surpasses the top projection of 830,000....

Considering that California represents nearly 21% of all QHP enrollments to date nationally, until I receive solid data otherwise, I'm going to stick with 85% paid.

There's two more factors to consider as well, however:

But wait, what if the total hits my current projection of around 6.2 million?

So again, when the deadline hits, I'm not gonna worry about 15% of enrollments not being paid when 33% or more of the policies haven't even started yet.

Next, let's look at Vermont.

I realize that VT probably isn't representative of the other 49 states (+DC), but for now, it's the only state to break out not only the paid/unpaid numbers, but which month each one was/is set to start.

As of March 20th, they're only showing about 64%, which admittedly doe sound bad.

As of mid-March, the only ones which can honestly be judged for their paid/unpaid status so far are January, February start policies (and possibly March, depending on your perspective), since those months are either over with or already started...and in Vermont, at least, those 3 months combined add up to 16,446 paid out of 17,934...or 92% PAID.

So again, when the deadline hits, I'm not gonna worry about 15% of enrollments not being paid when 33% or more of the policies haven't even started yet.

Now, let's assume that in the end, 8% of the enrollees really and truly DON'T pay up, even a month into their coverage period, because they're deadbeats, or losers, or whatever.

In fact, for the moment, let's even assume that none of those 8% are due to the insurance company billing system screwing up up (more on this below).

At this point, then I have to ask the following: What was the industry norm for cancelations/deadbeat policyholders before the exchanges launched?

Well, that leaves 7% that can be legitimately attacked as not "counting" towards the total.

However, again, we won't know that until mid- to late May.

So, I'll say this here and now:

Whatever percentage of total exchange-based QHP enrollments still haven't been paid by the policyholder as of May 31st should indeed be subtracted from the official HHS total number, assuming that those non-payments are due to either a) the policyholder bailing/refusing to pay or b) the government-run exchange (not the insurance company's billing system) screwing up.

Until then, it's all a bunch of blather.

In addition, as noted above, there have also been numerous stories of the payment being made but the insurance company screwing up, due to their billing system being messed up, their notification system failing to confirm receipt and so on.

My own family is an example of this--we made our payment to BCBSM back in December via auto-pay right after we enrolled for January coverage...but BCBSM's system messed up, sent us three sets of cards (they had to cancel 2 of them), and didn't actually confirm our December payment for January coverage until early February. I've heard numerous similar tales, where the payment problem was not the fault of the customer or the exchange itself, but the insurance company. Here's a similar story from one of the articles linked to above:

For some Californians, however, the biggest problem wasn't paying for a plan, it was getting confirmation that their payment had been processed.

It took Woodside resident Jennifer Jones and her husband a nerve-racking seven weeks and two payments -- the first paid by check, the second online -- before their insurance company finally acknowledged that they were insured.

"It was extremely chaotic, just a nightmare," said Jones, a marketing consultant, who stopped payment on the initial check she wrote after waiting seven weeks for the insurer to cash it.

I have no idea how many people fall into this second category, but it's certainly more than a handful.

As a result of all of the above, I'm assuming at least 1/3 of that 15% "unpaid" shouldn't really count as such, and in fact think I'm being pretty conservative in this estimate.

Thus, on the spreadsheet and graph I have the bare minimum QHP enrollment number as 90% "paid or unpaid for legitimate reasons" (and I suspect the actual % who do end up paying will be much higher...but again, we won't know that until sometime in May).

Now, certainly the "deadbeat" issue is still cause for some amount of concern, as are the remaining data transfer issues that some of the exchange websites are still having. The non-payment percentage probably will end up being higher for exchange QHPs than the industry norm, and if the exchanges are still screwing up with their data transfers to the insurers, that's definitely a problem. However, it's also not as simple as just "lopping off 15%" from the total for "non-payment" either.

UPDATE: OK, thanks to Markos Anderson in the comments for bringing my attention to this story out of BizTimes.com, which in turn links to this memo (PDF) from the Wisconsin Insurance Commissioners Office.

Hmmm...in the case of Wisconsin, it does sound like even when applying the "policies already started" criteria for January and February, the paid percentage kind of blows. It's annoying that they didn't include March, April or May data for comparison (although the wording of the memo makes it obvious that they're only addressing the Jan/Feb starts...for the same reason I laid out above: If their policy hasn't started yet, it's not worth making a fuss over).

So, fair enough: I've added Wisconsin's data to the chart at the top (which keeps it at 81% overall), and true to my word, I'm separating out Wisconsin's documented unpaid enrollees from the total on the spreadsheet. which reduces the total by 9,280.

If this proves to be the case with other states with regard to their January or February enrollments, then the "unpaid" argument might start holding water after all, but so far we only have the breakouts by month from 2 states (which average out to 83% for January and February).

As an aside, this Wisconsin memo also contains some info on another topic I talk about a lot: Off-Exchange QHP enrollments! This only includes Off-Exchange numbers through January 15, but it's still better than nothing:

UPDATE 04/03: Now that the open enrollment period has completed and updated Paid data is coming in, it looks very much like a flat 93% is a reasonable rule of thumb to use.