You can see this in the chart below; it's the first and second columns which are relevant. The third column appears to refer to some glitches in the system which aren't the fault of the customers, who have paid their premiums to the insurance companies. It looks like Vermont has 1,973 people who are owed a heck of an explanation (not so much the April starters, but the Jan/Feb/March starters, anyway), but 18.5K have finished the process and paid their premiums as required. 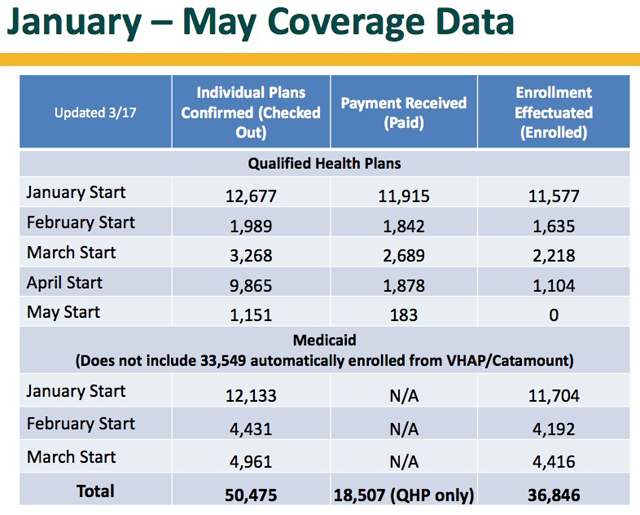 The main impact on this update is to slightly increase the Medicaid number...and to slightly lower the Unpaid QHP number, changing Vermont's "Paid" percentage from 61% to 64% but lowering their total enrollment figure by about 1,200).

However, this also gives an updated look of exactly my point when it comes to the larger "But how many have PAID???" brouhaha.

Take a look at the chart above.

The only ones which can truly be judged for their paid/unpaid status so far are January, February and March start policies, since those months are either over with or already started...and in Vermont, at least, those 3 months combined add up to 16,446 paid out of 17,934...or 92% PAID.