Ka-pow! This is the other big state exchange number I've been looking for this week (after California, of course). The New York State of Health exchange hasn't put out an official press release yet, but within the past hour they quietly updated the home page of their website with the new total enrollment number: 666,397.

Lame "Mark of the Devil" jokes aside, this represents a nearly 13% increase over just 8 days ago.

Naturaly I don't know what the QHP/Medicaid breakout is yet; NY has a strange habit of posting the total number on the website up to a day before issuing a formal press release, which seems a bit backwards to me, but whatever. The 3/10 totals were about 300K QHP / 291K Medicaid, and NY has shifted to roughly a 20/80 split between the two, so until they give the actual breakout I'll assume that the 75,758 are split roughly 15,100 Private QHPs / 60,658 Medicaid/CHIP.

This would bring the totals to 314,936 QHP / 351,461 Medicaid. I should stress, however, that the dramatic ratio shift towards Medicaid that has happened over the past 2 months in NY may actually reverse itself in the final weeks, as QHP-procrastinators finally start scrambling to enroll. If so, that could mean that I have this ratio split off dramatically; I should know later today or early tomorrow and will adjust accordingly. I can't use the new NY data in my March projection until I have the specific number, however; in a state as large as NY, even a small error could make for a significant change in the overall projection, so I'll just have to wait a bit...

OK, that was fast! Contributor Dwight Schrute just led me to an article in the Albany Business Review which breaks out the exact numbers, and sure enough, the Medicaid shift has indeed reversed itself: 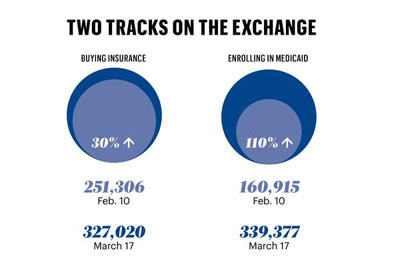 More significantly, this has a significant impact on the projection table, as New York's QHP enrollments are now running 56% higher per day in March than February...and at 3,400/day for the past 8 days, more than double the February rate over the past week.