Sticking My Neck Out: ACA-Driven Medicaid/CHIP Enrollments: 7.3M (or 5.2M)

OK, in some ways this is gonna make my previous Medicaid analysis (which was confirmed by the CMS a few days later) seem like kid's play, but in other ways it'll actually be far easier to follow. Not only have I prepared multiple screen shots of the spreadsheet involved so you can see exactly what numbers changed and why, but there's far less guesswork on my part as to which cells to keep or eliminate. All of the relevant reports, along with the actual spreadsheet itself (with all 6 worksheets) are linked to at the end of this screed.

You see, while my 6.3M figure from several days ago does match the 6.3M total that CMS announced yesterday, there are still some anomalies, because my 6.3M includes some additional data that's been released since the end of December, while their 6.3M includes the December "direct ernrollment" data for all 50 states that I didn't have access to. There are some additional factors to sort out, and I decided to start from scratch to figure out what they were. What I found surprised me.

Now, before I get started, a few caveats apply:

Having covered my butt, let's get started, shall we?

I've gone back through all 3 CMS reports and have painstakingly pulled out all of the footnotes which are relevant to the Medicaid/CHIP enrollments (ignoring all the others related to stuff like Title XIX programs, AIDS Drug Assistance programs, data missing from couny welfare agencies and so forth…that still leaves 63 notes!)

I then laid out the impact of these notes onto a chart, as follows (click all images for larger version): 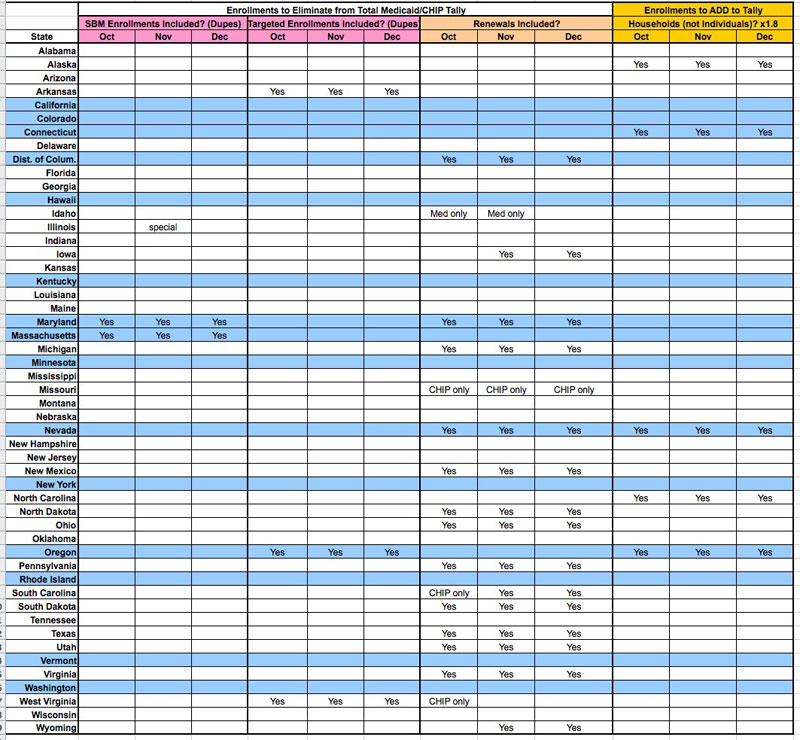 Then, I created 6 spreadsheets:

This totals up to 10.6 Million, but DO NOT USE THAT NUMBER; it includes a lot of duplicated data and so forth. It's just a starting point. 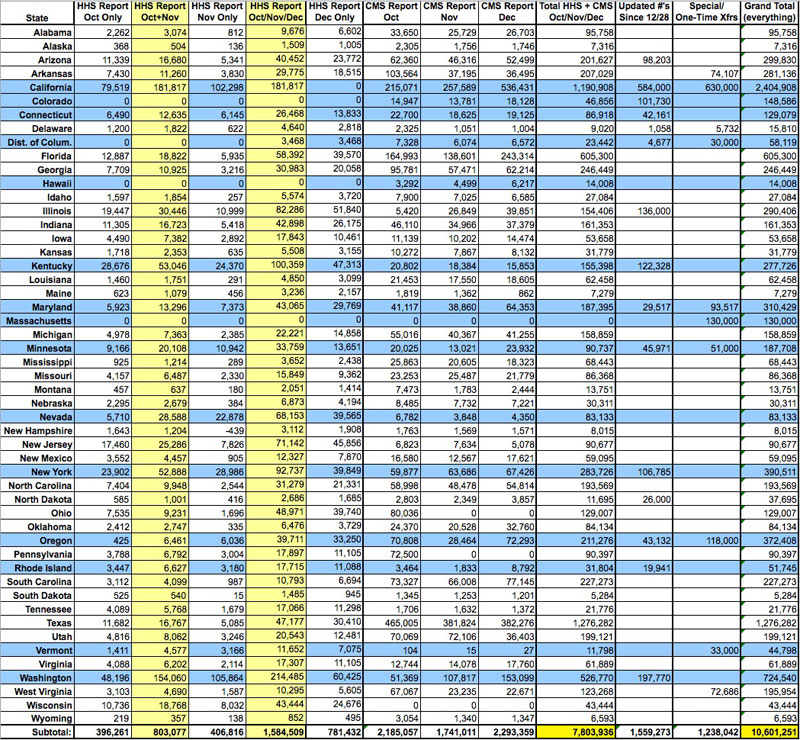 The second version removes much of the DUPLICATE data, according to the notes in the CMS reports. There's actually far less overlap between the CMS and HHS reports than I was led to believe. In fact, the only state exchanges which are duplicated are Maryland and Massachusetts (and MA didn't have any listed through their exchange anyway). I did have to subtract about 5,000 from Illinois (since they double-counted October on the November report), and the Arkansas, Oregon and West Virginia "one-time specials" were duplicated as well. Otherwise, however, the numbers are clean (according to CMS, anyway).

That drops the grand total down to 10.3 million. 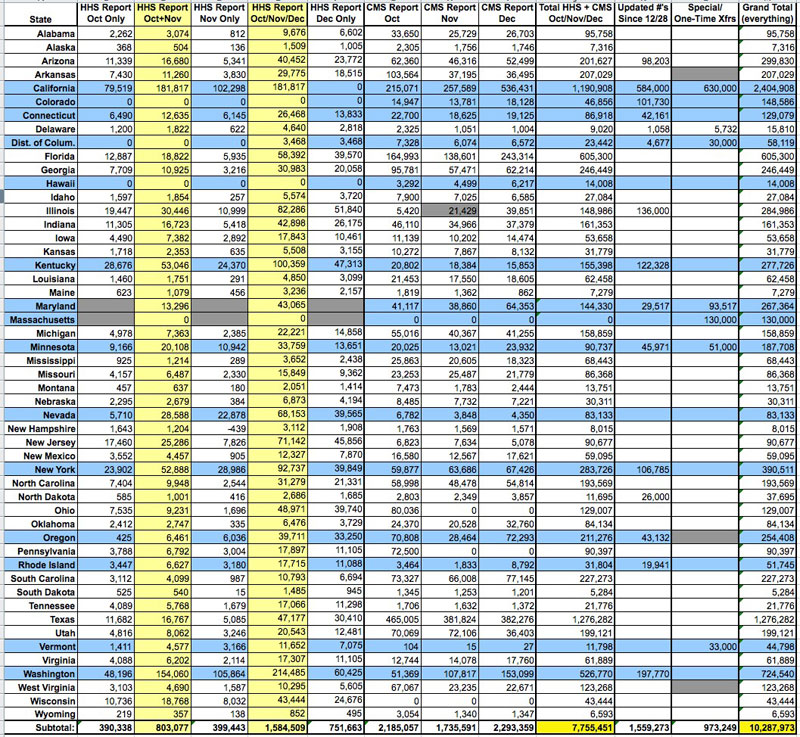 ​This is probably the most anticipated spreadsheet, as it ELIMINATES ALL RENEWALS (at least, according to CMS). Believe it or not, only 18 states include renewals, and even those aren't necessarily for all 3 months (Iowa and Wyoming only have renewals for Nov & Dec; Idaho only for Oct. and Nov.; and WV only for October). Furthermore, even when renewals are included, it's not always for both Medicaid and CHIP. Idaho only has Medicaid renewals included; Missouri and WV only have CHIP renewals included.

Removing all of the renewals--according to the CMS REPORTS-- only drops the grand total down to about 8.0 million. 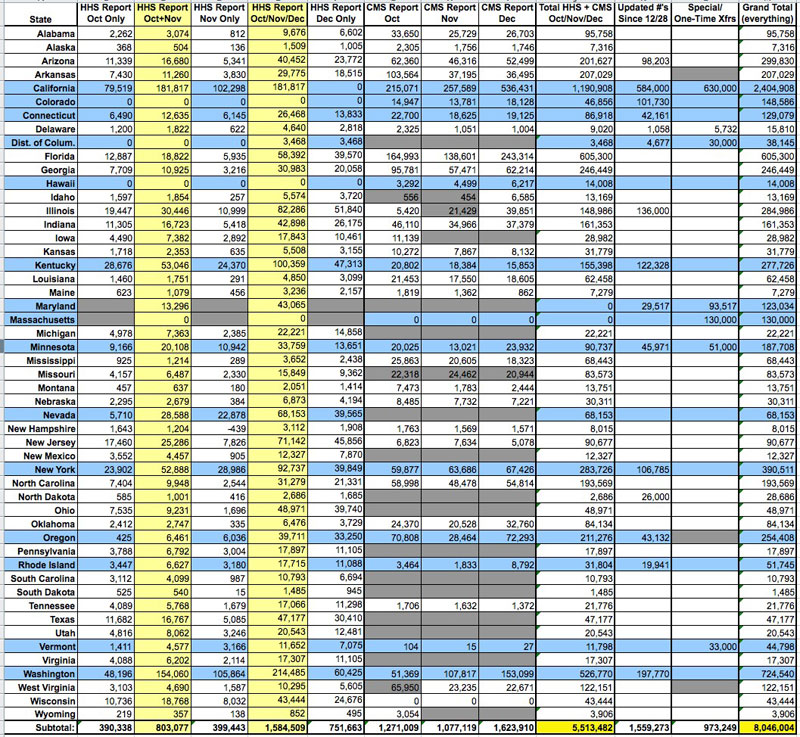 But we're not done yet.

​This one will almost certainly cause controversy. Until now, I was aware that some state data includes "households" while others list "individuals", but I've never known which states. Well, it turns out the CMS reports give that info (at least for Medicaid/CHIP, anyway). There are 5 states (Alaska, Connecticut, Nevada, North Carolina and Oregon) which report HOUSEHOLDS, not individuals.

So, how many people are there in a typical "household" in the United States? Well, according to the US Census Bureau, it's roughly 2.6. However, Covered California uses an average of around 1.8 people per application. I'll err on the side of caution and use this instead. Multiplying the CMS report tally ONLY (i.e., NOT the exchange numbers) for those 5 states only by 1.8 brings the grand total back up to about 8.3 million. 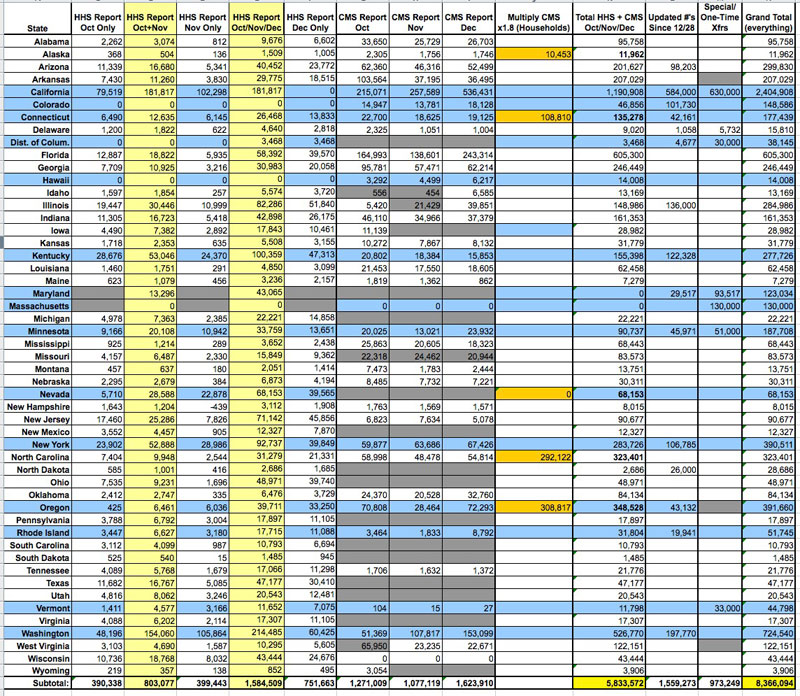 ​Finally, we have to remove some more duplicates. Remember, the updates added since 12/28 partly duplicate earlier numbers. This is actually the trickiest part, because some states are lumping exchange + direct together and others aren't. These numbers definitely "trump" (eliminate) the HHS report figures, and in some cases they also eliminate the CMS report figures. There's 15 states that have updates since 12/28 as of this writing; I've wiped out all the other numbers for Colorado, Illinois, Maryland and North Dakota, because the wording of those press releases/news stories is pretty clear that this is THE total number to use, supplanting all else. For the other 11 states, I've wiped out the HHS (exchange) numbers but am keeping the CMS numbers.

It's conceivable that I'm off by as much as a couple hundred thousand on this one, but unless I'm sorely mistaken about California, New York and Washington (and I'm pretty sure I'm not), that means that the total number of actual PEOPLE who have ENROLLED in either MEDICAID or CHIP since October 1st, 2013, NOT including RENEWALS comes to (as of this writing): 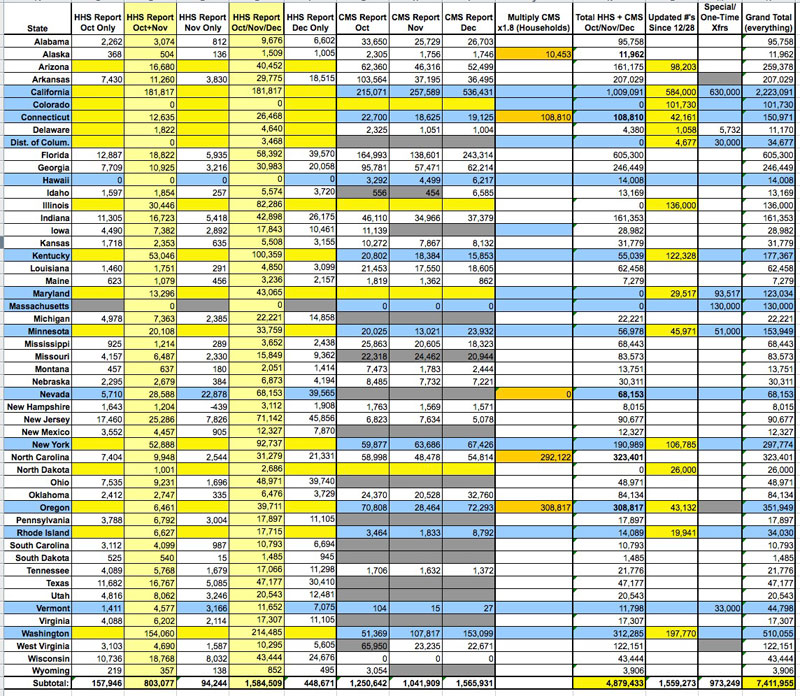 Now, there is one more thing, and here's where we get into a question of philosophy.

OK, the last spreadsheet is optional in my opinion. It answers the claim that even NEW enrollees "don't count" unless they're also newly eligible (that is, the claim that Medicaid/CHIP enrollees shouldn't "count" as being "thanks to Obamacare" if they were already eligible prior to January 1st under pre-ACA rules but hadn't gotten around to enrolling for whatever reason). The fastest way to (mostly) eliminate those folks from the total is to simply wipe out the 25 states which haven't expanded Medicaid at all. I happen to disagree with this perspective, since I'm pretty sure that many of the "previously eligible" folks have only signed up since Oct. 1st because of the massive publicity, media coverage, outreach programs and so forth caused by the ACA, but for the sake of completeness, I've wiped out half the country to accommodate this talking point. 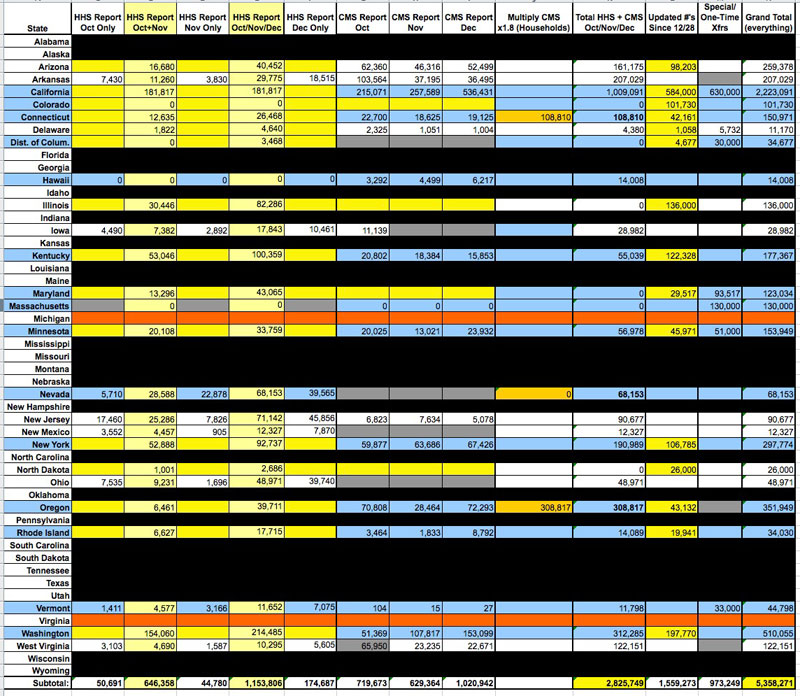 In other words, even when you concede to EVERY SINGLE TALKING POINT about who "should" or "shouldn't" count as a NEW Medicaid/CHIP enrollee specifically due to the ACA…you still come out with over 5.3 million people added to the rolls.

Heck, I even eliminated Michigan, since we are expanding Medicaid, but not until April 1st (which means that none of the current enrollees in MI were eligible previously). Michigan is a lighter color to reflect this, as is Virginia, since the odds are strong that Gov. McAullife is going to get Medicaid expansion pushed through sometime early this year, but I've still eliminated both state numbers for this final spreadsheet.

Remember that when I eliminated the renewals from those 18 states back on Spreadsheet 3, I had to eliminate ALL of the enrollees for those cells, even though only SOME of them are renewals. For instance, in the District of Columbia alone, I had to wipe out almost 20,000 people because some of them were renewals…but others are newly enrolled. However, there's absolutely no way for us to parse these cells any further, so I have to wipe them out completely to be certain that none of those renewals "sneak by".

Now, to be fair, I've also already stated that Spreadsheet 5 (eliminating the difference between existing data and post-12/28 data) may still include some duplication…but that's almost certainly canceled out by the "casualties of war" numbers that I had to wipe out in Spreadsheet 3, so I'm quite confident that in the end, the final 2 numbers are very, VERY close to the true situation.

In the end, I'm about 99% certain that the correct number of NEW Med/CHIP enrollees as of this writing is either:

​UPDATE: OK, I made a significant mistake with Oregon. Looking more closely, I was only supposed to multiply 51,410 households by 1.8 instead of doing so for the 120K "Fast Track" enrollments as well. This resulted in an extra 96,000 people who I shouldn't have counted. This error has been corrected.