My general conclusion was that the actual grand total number of Medicaid/CHIP enrollments since October 1st, 2013 is actually far higher than the 3.9 million cited by the Obama administration (which was based on the 12/20 CMS report) or even the 4.5 - 4.6 million that both I and Glenn Kessler at the Washington Post have agreed are more accurate up until now.

Instead, I concluded that the actual grand total number is closer to well over 6 million, when you include all enrollments: Federal exchange-based; State exchange-based; Direct enrollments via the regular state Medicaid offices; special/one-time automatic transfers of people from existing state-level healthcare programs (such as LIHP in California and Commonwealth Care in Massachusetts), and more recent Medicaid enrollment data which has come over the 3 weeks since the 12/28 date cut-off in the HHS report.

An official at CMS reviewed my work, and while they were unable to confirm/verify my final conclusion, they did agree that my methodology is correct.

I was hesitant to actually modify the spreadsheet itself, however, since a) I could still be wrong and b) frankly, some of the numbers still just don't make sense even when using the "tic-tac-toe grid" system for pulling apart the reports which should have prevented double-counting and so forth.

In general, I've concluded that for most states, I should simply use the higher of the two figures when comparing the same dates (10/1 - 11/30), on the presumption that the lower one is already being counted as part of the higher one.

This is even more obvious in the case of Vermont, where HHS claims 4,577 Medicaid/CHIP enrollees as of 11/30, which defintely looks about right...but CMS claims only 115 people (that's 115, not 115K) exchange-based plus direct enrollments. Obviously the 4,577 figure is correct here.

Conversely, look at Hawaii. HHS reports ZERO (technically "n/a") exchange enrollees as of 11/30, while CMS claims 7,791 exchange+direct. In that case, it's pretty clear that the 7,791 number should be used.

In other cases, the special/one-time transfer numbers are most likely already accounted for in the CMS report. For instance, HHS lists Oregon as having 39,711 (manual) exchange-based enrollments, while CMS lists 99,272 "direct" enrollments. At the same time, however, Oregon has also been touting their automatic transfer of 118,000 (as of Jan. 15) people into the Oregon Health Authority by using existing food stamp information. It's highly likely that most, if not all of the 99,272 "direct" enrollments are included in that 118K figure, and so on.

As a result, the actual, accurate enrollment numbers are still partly a guessing game, and I've had to come up with the most logical system I can for tallying everything. As a result, I'm probably undercounting some states while overcounting others, but I'm fairly confident that the overall total is right around 6.2 million for everything. 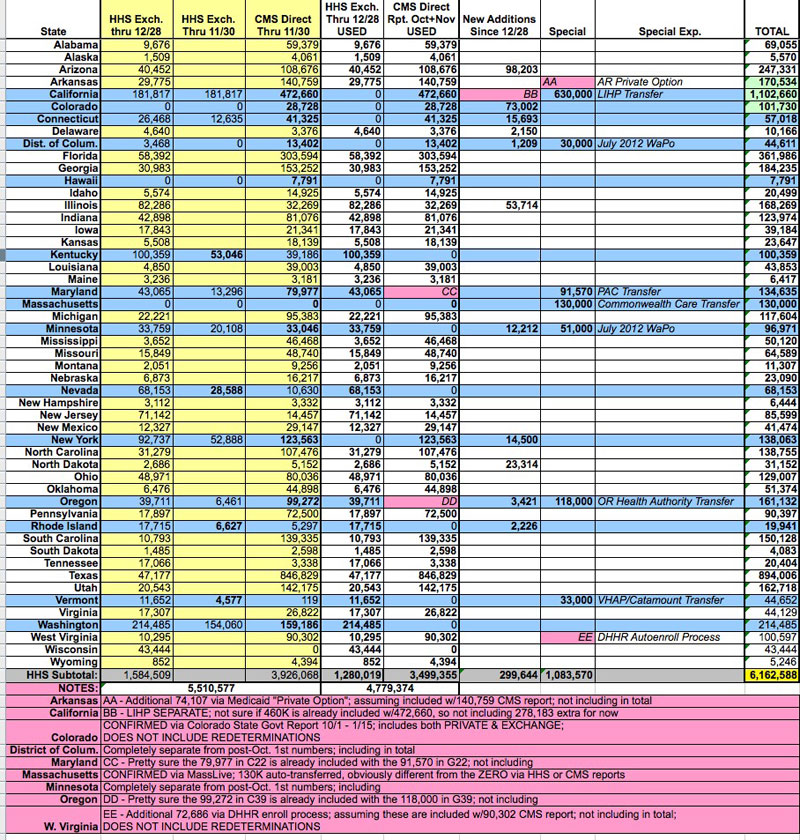 This question is starting to be at least partly answered, however. Washington State separates out their "redeterminations" (ie, renewals) from new enrollees, and both Colorado and Maryland have started doing so in their most recent press releases/reports as well (Colorado simply doesn't include renewals in their reports at all, while Maryland appears to have started backing their numbers out from a higher total). So, that's at least 3 states out of 51 (w/DC) that are doing so. Hopefully the other 48 will do the same soon.

In any event, in order to display all of this new data on the website in an easy-to-read format, I've had to make a radical change in the structure of the spreadsheet...by completely moving the Medicaid/CHIP data onto a completely separate one.

Going forward, the original spreadsheet will only contain Private QHP (qualified health plan) enrollments, whether via the Exchanges, direct enrollment through insurance companies or in the form of 19-26 year olds staying on their parents' health insurance plans thanks to the ACA.

Meanwhile, all Medicaid/CHIP and other publicly-funded ACA health plan data has been moved to a second spreadsheet.