The hopefully-NOT-final "weekly snapshot" report is out from the HHS Dept, covering the 1-week "#ACAOvertime" period after the end of the official 2/15 deadline: 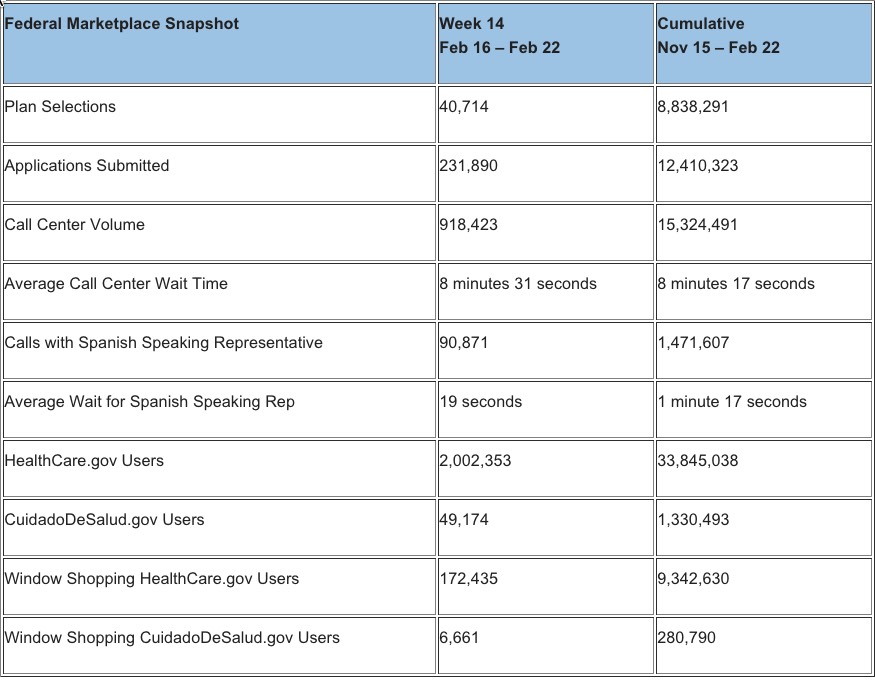 Wrong. As you'll recall, while the HHS Dept. included all 8.8 million people in the actual "snapshot report" itself, they also deliberately subtracted 200,000 people in the accompanying text and subsequent marketing/promotion of the "11.4 Million" number (which was actually over 11.6 million). They estimated that around 200,000 renewed enrollees from 2014 would have to be kicked off of their policies due to ongoing problems with documenting their legal residency.

Officially, these people were to be given the boot on 2/28, and therefore, in my opinion, really should have been kept on the official tally until March 1st. Instead, HHS decided to nip an obvious "cooking the books" GOP attack point in the bud by pre-purging these 200K people last week.

The good news is that it turned out to only be about 90,000 people who had their policies cancelled due to residency issues:

We have now completed processing the information submitted by most of those with citizenship and immigration data matching issues described in last week’s snapshot.  As a result, approximately 90,000 consumers who had 2014 coverage were not able to continue their Marketplace coverage in 2015 because they did not provide the necessary documentation of their citizenship or immigration status (the previous estimate was 200,000).

OK, fair enough. The only quibble I have here is that this makes the numbers jump around a bit confusingly...first down 200K, then up 200K, then down 90K and finally up...by 130,714 during the #ACAOvertime week, if I'm figuring this correctly:

Their coverage has been terminated and these individuals are no longer included in the cumulative total.  As such, the change in the weekly and cumulative total reflects both the increased number of sign-ups due to the special enrollment period and the reduced number of re-enrollees due to this action.

I applaud the HHS Dept. for erring on the side of caution, I really do. I just wish that they would actually show the numbers in the table itself to avoid this sort of confusion (and yes, I realize that I'm probably the only person in the country who cares about this sort of thing).

Unfortunately, this report does not include a state-by-state breakout ;(

In addition, I'm deeply concerned about the repeated past-tense wording of the press release:

Each week during Open Enrollment 2015, weekly snapshots were released to provide a more detailed look at the millions of consumers who visited HealthCare.gov, shopped for coverage, selected plans or were automatically re-enrolled through the HealthCare.gov platform; which includes the Federally Facilitated Marketplaces, State Partnership Marketplaces and supported State-Based Marketplaces.

The Open Enrollment snapshots for the Federally Facilitated Marketplace provided point-in-time estimates for weekly data. These were preliminary numbers and fluctuated based on consumers changing or canceling plans or having a change in status such as new job or marriage. Open Enrollment ended on February 15 but consumers who waited in line at the call center or who experienced technical issues were able to sign-up for coverage until February 22 through a special enrollment period. This is the final Open Enrollment 2015 snapshot and includes data through February 22 to capture those consumers who signed up for affordable coverage during the special enrollment period.