New York: Enrollment data after all!! Well...sort of: 55K QHPs over 3 day period

Oof. I've been compiling a lot of charts and graphs the past week or so based on what I thought were the most comprehensive 2017 enrollment numbers available to date. The biggest data gaps are Vermont and New York, neither of which has released any enrollment data yet...or so I thought.

However, I somehow completely forgot this post from the thick of the original December 15th deadline:

In the past three days, more than 55,000 New Yorkers have enrolled or renewed coverage through NY State of Health. The Customer Service Center has answered more than 1,000,000 calls since the start of Open Enrollment on November 1 and an average of 46,000 calls a day this week. The NY State of Health website has also experienced high traffic reaching 12,000 users in peak hours.

...This is also the first time this enrollment period that NYSoH has released any actual enrollment data: 55,000 renewals + new signups. Unfortunately, that number only includes 12/12 - 12/14...no earlier numbers are included. Still, I'll take what I can get...

And New York makes it three:

ALBANY, N.Y. (December 15, 2016) - NY State of Health, the state’s official health plan Marketplace today announced that the deadline to enroll or renew coverage for a health plan effective January 1 has been extended through December 17. The previous deadline was December 15. Consumers have two additional days to enroll in a plan with coverage starting January 1.

“NY State of Health is having the busiest open enrollment period yet and we want consumers to have a little more time to select a health plan for January 1, 2017.” said NY State of Health Executive Director, Donna Frescatore.

Thanks to Zachery Tracer (as well as Dan Goldberg & Cynthia Cox) for the heads up...

Well, now...this is about as cut & dry as it gets! They don't display the actual enrollment numbers for each carrier, but that's OK because the only real reason I need it in the first place is to weight the increases by market share...which the New York Dept. of Financial Services has helpfully already done! 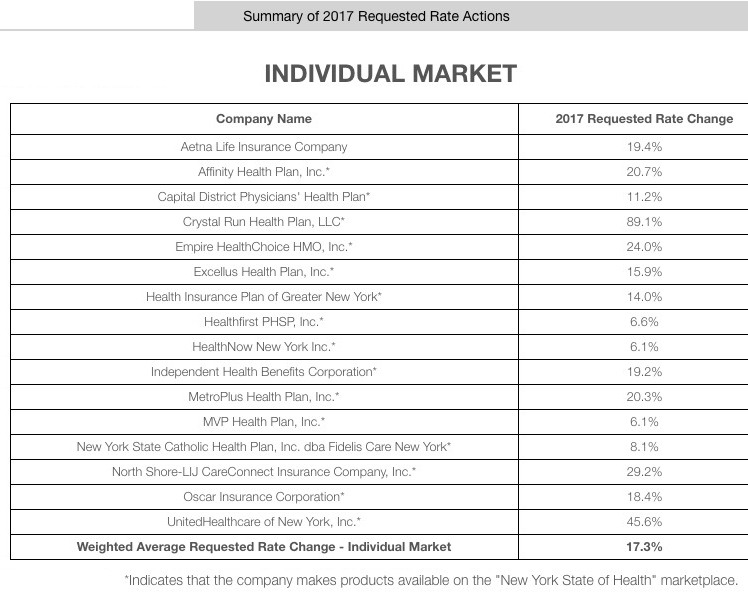 And there you have it: A weighted average requested rate increase of 17.3% across the entire state's ACA-compliant individual market. Remember that NY never allowed transitional plans anyway, and there are likely only a handful of grandfathered plans left on the individual market, so this should cover well over 90% of the market.

They also included the Small Group market, which I take note of when available but don't really track nearly as closely as the indy market:

New York: The Health Republic Meltdown is embarrassing for just about everyone

Sometimes you just need the headlines to tell the story:

Can you believe that ? This is just going to increase cost for everyone on the state exchange !

*Not his real name.

OK, a couple of things:

Thanks to Richard Mayhew for the head's up:

ALBANY, N.Y. (AP) — The state's health exchange expects to enroll more than 470,000 New Yorkers in its new low-cost option for coverage this year.

Testifying at an Assembly hearing this week, exchange Executive Director Donna Frescatore said New York chose to participate with the Essential Plan. The plan is an option under the federal Affordable Care Act starting in 2016.

It's aimed at adults who don't qualify for Medicaid but have been unable to afford private coverage.

The Essential Plan has no annual deductible before insurance begins paying medical bills.

Premiums are free for those with incomes at or below 150 percent of the federal poverty level.

New York: Final OE3 numbers released! Nothing new on the QHP/BHP front, but check out Medicaid/CH+!

At long last, the New York State of Health exchange has released their final 2016 Open Enrollment Period data! (thanks to Dan Goldberg for the heads up)

Actually, two of the data points (private QHPs and BHP enrollment) aren't very different from what I already knew. However, there's some interesting news on the Medicaid & Child Health Plus side:

Rate of Uninsured Drops to Lowest Level in Decades

ALBANY, N.Y. (February 23, 2016) - NY State of Health, the state’s official health plan Marketplace, today announced more than 2.8 million people have signed up for health insurance as of  January 31, 2016, the end of the 2016 open enrollment period.  Since the Marketplace opened in 2013, the number of uninsured New Yorkers has declined by nearly 850,000. According to recently released data by the Centers for Disease Control and Prevention, the rate of uninsured declined from 10 percent to 5 percent between 2013 and September 2015 and is at its lowest level in decades.

New York: The Award for Catch of the Week Goes To...Andrew Sprung!

On the one hand, I'm kicking myself for not noticing this red flag when the final 2016 Open Enrollment numbers were released last week. On the other hand, I was trying to absorb, analyze and compile a lot of data at the time, so I should cut myself a bit of slack for missing it.

When the numbers were announced, one figure which seemed surprisingly high was that New York (which still hasn't actually released their final numbers yet) apparently enrolled around 400,000 people in their new ACA-created Basic Health Plan (BHP)...and that 300,000 of these folks had supposedly shifted to the BHP program from existing exchange QHP policies.

This did seem surprisingly high to me; I had assumed that instead of NY's QHP total going up around 25% (as I was expecting in most other states), it would stay essentially flat, with the cannibalization by BHPs essentially cancelling out the 100,000 new QHP enrollees I was expecting. 300K making the move was 3x as many as I was expecting. However, in the flurry of other data to crunch, I let this slip by me.

THIS JUST IN...the first official NY State of Health enrollment update (thanks to Dan Goldberg for the tip):

More than 2.7 million New Yorkers currently enrolled in coverage through NY State of Health • New Yorkers must enroll by January 31 for 2016 Coverage

ALBANY, N.Y. (January 25, 2016) – NY State of Health, the State’s official health plan Marketplace, is encouraging uninsured New Yorkers to learn about affordable health coverage options and enroll in a plan by January 31, 2016. To date, more than 2.7 million people are enrolled in health insurance through NY State of Health, including 1.9 million enrolled in Medicaid, and 827,000 enrolled in non-Medicaid coverage. This includes 210,000 children enrolled in Child Health Plus; 260,000 individuals enrolled in a Qualified Health Plan and 356,000 people in the new Essential Plan, a new and more affordable option for lower income New Yorkers.