As a result, I've started simply presenting them without much commentary. Here's the October report (remember, this is for currently enrolled 2016 policies, not 2017 Open Enrollment policies:

Things have actually been relatively quiet on the Colorado rate hike news front since June, when I first ran my projected estimates of requested rate changes for the 2017 individual market:

Well, today the Colorado Dept. of Insurance released their approved rate hikes for both the individual and small group markets. Unfortunately, I don't see an actual carrier-by-carrier breakout, but they do provide weighted averages by other criteria such as metal level, on exchange vs. off exchange and so on: 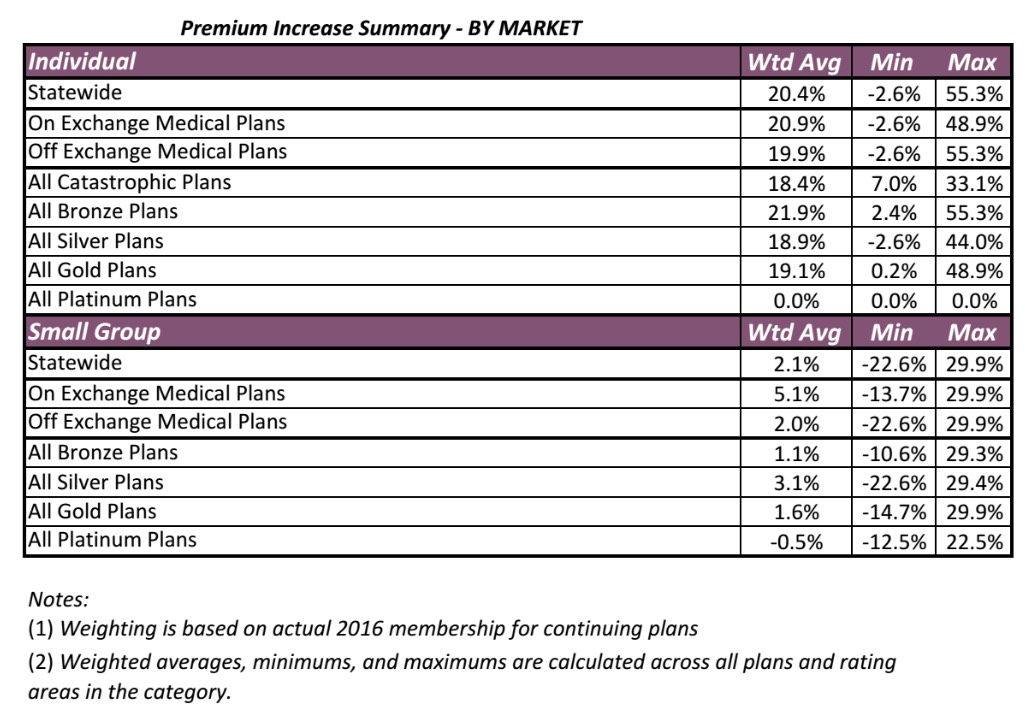 While it would be nice to have the averages weighted by carrier, the on/off breakout is kind of interesting because it also lets me know what the relative numbers are between the two. For the individual market, note that the on exchange weighted average is 20.9% vs. the off-exchange's 19.9%.

As a result, I've started simply presenting them without much commentary. Here's the August report:

As a result, I've started simply presenting them without much commentary. Here's the July report:

I've been trying to figure out how to read Connect for Health Colorado's enrollment reports for months now, and I thought I had finally cleared things up last month....only to have that rug completely yanked out from under me by CMS's Q1 Effectuation Report, which stated that C4HCO only had 108,311 people actually enrolled in effectuated healthcare policies as of 3/31/16 rather than the 115,890 they seemed to be reporting at the time...which, combined with other confusing numbers, made the May report's 143,430 figure seem awfully suspicious.

Colorado: ColoradoCare runs into a snag with NARAL...

Last month I wrote an extensive piece about Colorado's Amendment 69 initiative, aka "ColoradoCare", which would be the latest attempt to achieve a state-level single payer healthcare system (or at least near-single payer; if enacted, it would replace all current healthcare coverage except for Medicare, the VA/TriCare and the Indian Health Service).

While I was generally supportive of the idea overall, I also concluded that:

For me, however, ColoradoCare addresses many of the criticisms I've had of Bernie's plan. I'm not necessarily "endorsing" it (I still have a lot more to learn about the details and the criticisms before I can do so), but the bottom line is that it's more realistic and far better thought out than Bernie's national plan is. This is the best opportunity for achieving single payer that you're likely to see anytime soon.

As I've noted the past few times that I've posted Colorado enrollment report updates, the way they report their numbers can be very confusing...which is doubly frustrating since the reports are also chock full of useful data as well.

Anyway, according to their latest report, when you add up the "effectuated enrollments WITH and WITHOUT APTC/CSR" (medical only), it totals 143,430 people as of June 9th, 2016...a slight drop from the 146,000 figure as of the end of April. As I noted last month, however:

Many single payer advocates have been either confused or angry with me (to put it mildly) for not being a fan of Bernie Sanders's proposed national SP plan.

I've explained repeatedly that while I am a SP proponent, I just don't see it happening at the national level all at once. There are too many barricades and too many logistical, economic and political problems in doing so to make it remotely feasible to bring SP to the country in this fashion. In addition, I have major problems with the utter lack of detail in Bernie's plan.

HOWEVER, I've also repeatedly stated that I do strongly support getting the ball rolling at a smaller level first--either by partially expanding existing SP programs such as (Medicare, Medicaid, CHIP); consolidating existing private systems into larger risk pools (ie, merging the risk pools of the individual & small group markets, as a few states have done already); and/or by getting SP enacted at the state level, then using that as a model for other states and/or as a national model if it works out.

Colorado: 2017: Humana is out but the future still looks BRIGHT

Thanks to Louise Norris for the heads up:

Humana will continue in the small group market for 2017 off the exchange, while exiting the individual market for both Humana Health Plans and Humana Insurance Company.

OK, so UnitedHealthcare is out except for off-exchange Golden Rule; this is actually an improvement over the prior United news, since it was assumed they were pulling out of the state completely.

A week or so ago, I reported that Connect for Health Colorado's monthly enrollment report contained some very confusing numbers:

...The 121,962 number at the top seems to be the one I want...except that it also includes SHOP and standalone Dental enrollments (I think).

...OK, so 121,962 includes SHOP, which has a maximum tally of 2,897, which means that the effectuated number as of 4/30/16 could be as low as 119,065...except that "Individual" could also potentially include standalone dental plans, confusing the issue further. Even worse, it says that this "Includes those who effectuated in the current plan year and later terminated a policy". 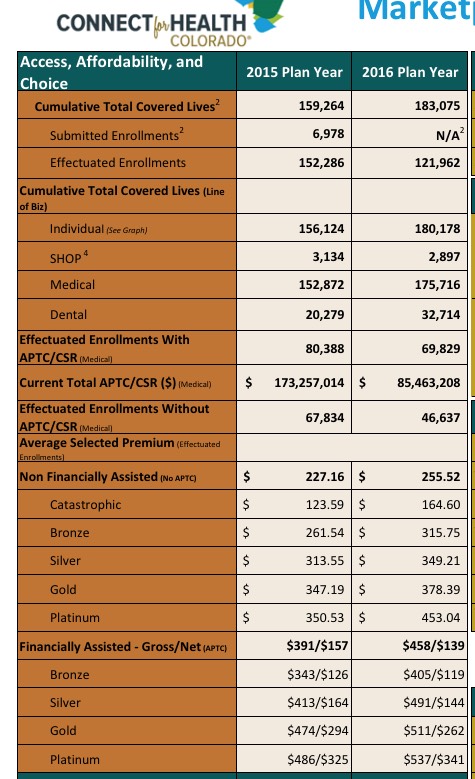 Your Moment of Zen: It's the SEP Rap.

When I reported on Colorado's monthly enrollment report a week or so ago, I noted that they had added around 15,000 QHP selections via off season SEPs, mainly due to the meltdown of their state Co-Op last fall. However, like I did with Minnesota (I'm slipping!), I forgot to note the effectuated enrollment number as of 3/31...and if I'm reading this correctly, it's not pretty: 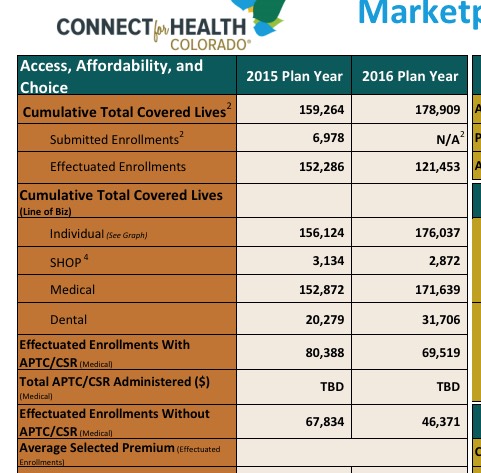