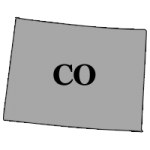 As I noted in the update to my post on the "Transitional Policy" decision a few days ago, the ACA's CO-OP program had a lot going against it from the get-go:

The program has been under siege from the start, including from the insurance industry. Before the law’s passage, government grants to help them get going were switched to loans. None of that money could go for advertising — a wounding rule for new insurers that needed to attract customers. Moreover, the amount available was cut from $10 billion to $6 billion and then later, as part of the administration’s budget deals with congressional Republicans, to $2.4 billion. Federal health officials abandoned plans for a co-op in every state.

So, let's see here: You're trying to create start-ups to enter an existing, mature market which is already dominated by major, behemoth-sized competitors which have almost unlimited funds. Naturally it makes total sense to a) make the seed money a loan with a tight payback time table; b) prevent them from advertising in a saturated market; and c) slash their budget by 75%.

In spite of all of this, and even in spite of any impact from the decision to allow relatively healthy, low-risk enrollees to stay on transitional policies (which the CO-OPs had none of, since they were brand-new) through their competitors, 23 out of 24 of the CO-OPs did manage to survive the first full year (CoOportunity of Iowa/Nebraska didn't even make it that far), and a few of them (Community Health Options of Maine and New Hampshire, as well as (last I heard) Consumers' Choice Health Plan of South Carolina) actually do quite well the first year.

While their reports have always been comprehensive, they were also a bit confusing. Thankfully, starting with their June report, they've made the appropriate data points a bit more obvious. While the QHP selection total is still confusing, the effectuated number (which is really more relevant at this point) is the combination of APTC/CSR + non-APTC/CSR enrollees, or 74,583 + 59,617 = 134,200 people as of the end of June.

While their reports have always been comprehensive, they were also a bit confusing. Thankfully, starting with their June report, they've made the appropriate data points a bit more obvious. While the QHP selection total is still confusing, the effectuated number (which is really more relevant at this point) is the combination of APTC/CSR + non-APTC/CSR enrollees, or 74,583 + 59,617 = 134,200 people as of the end of June.

While their reports have always been comprehensive, they were also a bit confusing. Thankfully, starting with their June report, they've made the appropriate data points a bit more obvious. While the QHP selection total is still confusing, the effectuated number (which is really more relevant at this point is the combination of APTC/CSR + non-APTC/CSR enrollees, or 74,583 + 59,617 = 134,200 people as of the end of June.

Louise Norris has provided some valuable information about 2016 individual market rate change requests in her home state of Colorado:

For 2015, Colorado HealthOP cut premiums aggressively, and ended up with the lowest-cost plans in eight of the state’s nine rating areas.  Unsurprisingly, that resulted in the CO-OP garnering the highest market share in the exchange during the 2015 open enrollment period, with nearly 40% of exchange enrollees selecting Colorado HealthOP coverage (among our own clients, Colorado HealthOP was even more popular, including among those who selected off-exchange coverage).

...In 2015, Colorado HealthOP got almost 40% of the exchange’s market share, and Kaiser was a close second with 35%; the two non-profits accounted for three-quarters of all the private plan enrollees in Connect for Health Colorado this year. 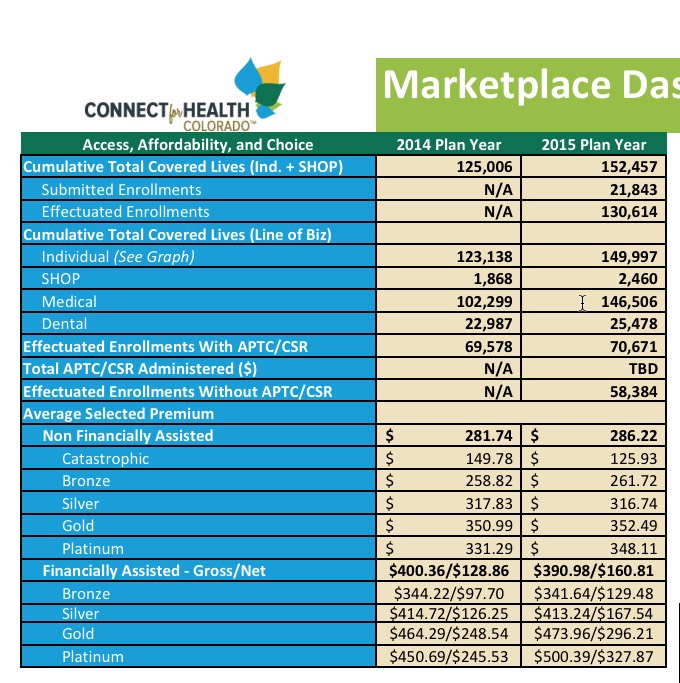 Colorado Mobile App: Sign of the times re. Medicaid/CHIP

OK, this isn't a huge thing, but it's noteworthy.

Historically, Medicaid (and to a lesser extent, the CHIP program for children) has carried a certain stigma, since it's traditionally been reserved for the very poor. Many people enrolled the program have been embarrassed/ashamed to admit that they needed the assistance, and many who qualified for the program even under the pre-ACA rules never actually signed up based on the "shame" factor (still others didn't enroll because they simply didn't know that they qualified or didn't understand the procedure/paperwork for doing so).

With that Affordable Care Act, that all changed (well, in the states which expanded Medicaid, anyway). Yes, it's still limited to the poor, but there's a difference between being "dirt poor" and "working poor" (and yes, I understand that many "dirt poor" people work their butts off...I'm talking about general societal perception here). Suddenly, millions of people who considered themselves "lower middle class" (or otherwise "not poor", anyway) found themselves being able to enroll in Medicaid alongside the "dirt poor".

OK, strike that...Colorado has released their newest data as well as DC and Vermont, leaving just 3 states to go (Connecticut (data since 2/13), Kentucky (data since 2/12) and Idaho, which hasn't posted any updates since way back on January 17th...over a month ago.

DENVER, CO – Between Nov. 15 and Feb. 15, nearly 220,000 Coloradans enrolled in healthcare coverage for 2015, either in private plans purchased through the health insurance Marketplace, or with Medicaid or Child Health Plan Plus (CHP+), according to new data released today by Connect for Health Colorado® and the Colorado Department of Health Care Policy and Financing.

There's one very interesting tidbit, however:

I've confirmed that Rhode Island's weather-induced enrollment extension is indeed state-wide and is of the "full" variety (ie, people can start the application process, not just finish it), through February 23rd. This is exactly the same policy that the Massachusetts exchange announced the other day.

The last official update out of Connect for Health Colorado had the QHP tally at 125,378 as of 1/31.

As of last Monday, Colorado reported 128,000 enrollments in 2015. About three-fourths of those are returning customers , with about a fourth being new customers.

OK, so that's an increase of around 2,622. However, the "...as of last Monday" bit is confusing. To me, saying "last Monday" on a Friday refers to the prior Monday (ie, 2/02 in this case). However, that would suggest that CO enrolled over 1,300 per day for 2 days in a row. The state was only averaging 233/day over the prior couple of weeks, which means they'd have to have ramped up over 5.5x, which is possible (a few other states have pulled this off).

Connect for Health Colorado has released their end-of-month enrollment update. Since the 1/15 deadline for February coverage, they've added another 3,728 QHP enrollees, or 233/day. At that rate they'd only add another 3,500 by 2/15, or less than 130K total (vs. their target of 194K or mine of 208K). Of course, that's an extremely unfair comparison, as 1/16 - 1/31 covers the slowest portion of the open enrollment period (immediately after a monthly deadline).

Even so, there's no realistic way that CO can hit their target at this point--they'd have to average 4,600/day just to hit theirs (and over 5,500 to hit mine). For comparison, last year Colorado averaged 627 enrollees per day throughout the entire open enrollment period (and that included the huge surges in December and March). This year they've averaged 1,607/day, and that includes all of the renewals from 2014. Even with a massive final surge, I just don't see any way of CO hitting more than 160,000 QHPs at this point, although I'll obviously be happy to be proven wrong.

Hot off the presses...